The first search results take you to articles about a town of 40,000 called Peachtree Corners, about 20 miles outside of Atlanta.

A surprise, perhaps, if you were expecting to see the name of some city in China, or Korea, or Japan that was planned and purpose-built from the ground up to showcase a new, more connected way of living.

Peachtree Corners is considered one of the most advanced cities in the world and the first true example of a "smart city" in North America.

But what does all of this really mean? Is Peachtree Corners an image of the future, with driverless electric cars and busses running the streets; seamlessly available universal Wi-Fi connectivity for all who enter; and millions of sensors and cameras covering, analyzing, and maintaining every square inch of downtown with flawless, AI-powered efficiency?

You see, Peachtree Corners gets its reputation thanks to a technology development complex called "Curiosity Lab."

Curiosity Lab is a 500-acre section of downtown Peachtree Corners where tech companies can test out their smart city and "internet of things" technologies in live environments.

Essentially, it's a technology incubator, complete with its own 1.5-mile-long test track where autonomous vehicles can be put through their paces in real-world scenarios.

I thought so, too, but it's still a far cry from the visions of the future we've been shown by tech companies and city planners promoting the smart city concept.

Smart cities are supposed to be vast, gleaming images of the future, not relatively small sections of small towns used for open-air testing of as-of-yet uncommercialized technologies. 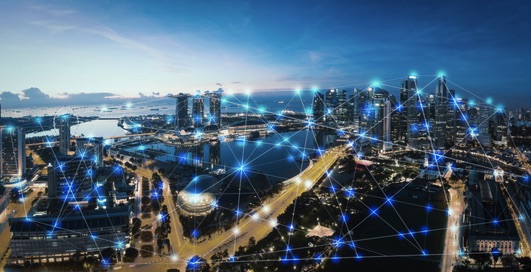 To get to that stage, a lot of things need to happen. More product testing and debugging is obviously one of those things. One testament to that fact is that Peachtree Corners is the first city in the U.S. to buy driverless vehicle insurance.

But aside from testing, there needs to be mass adoption of at least one new technology without which the entire concept is a non-starter.

That technology is a new kind of computer memory — one that can operate without external power and one which will stay stable and reliable for years without the need for maintenance.

The demand for such technology becomes more clear when you consider what it would take to actually make a true smart city happen.

The Reality of Progress

For a smart city to exist and function in earnest, it will require tens of millions of new devices and sensors hardwired into permanent features of the city like roads, bridges, sidewalks, etc.

These sensors would need to be in constant contact with centralized computers, providing city managers (as well as pedestrians and motorists) a constant stream of information about things like traffic patterns, weather conditions, wear and tear, and any other relevant factors.

Simple maintenance for this number of devices would require thousands of new dedicated staff just to keep things running.

Since the whole point of a smart city is efficiency, this makes the task pointless using currently standard data storage methods like the kind used by your iPhone or tablet.

To power an entire world of smart cities, the amount of energy alone necessary to run those trillions of new devices could outstrip the total current power output of the entire planet... and that's just one issue.

Heat, risk of fire, and the inevitability of failure due to loss of power drive this idea further and further into the realm of fantasy.

Unless that is the problem of energy-independent memory can be solved.

Well, what if it were solved? What if somebody came up with a way to indefinitely store information without the need for a power source, and have that information remain intact and accessible through millions of upload and download cycles without any maintenance?

If that were to happen, then the idealized image of the smart city can finally become a reality.

Today, that problem is being solved, and we stand at the cusp of a brand-new age in computer memory.

The solution is an entirely new kind of data storage, and it makes everything that came before it obsolete.

Compact, reliable, heat-free — this technology is already being implemented in critical, hostile environments, including space, and high-performance motorcycle racing.

Soon, however, the transition will be made into more common applications, and the city of the future will finally be within reach.

From the Extraordinary to the Everyday

The company developing this technology has a lot riding on its shoulders, but it also stands to gain an unimaginable volume of new business as cities across the world rush to license its new tech.

It's a small company, less than $150 million in market capitalization, and it's based in Arizona.

Its stock is public, though I'm willing to bet you've never heard of it.

This will change soon enough, however, as the technology it has pioneered will soon be essential across the world.

Now, you have two choices: You can wait and hear about this company on MSNBC a year or two from now.

Or you can find out the name, the ticker symbol, and the rest of the story right here, right now.

Check our my brand-new report to answer all of your questions about the tech, the market, and the future.