How to Profit from and Invest in the Palladium Bull Market

And investors are cashing in...

The price of palladium has skyrocketed 237% since December 2008, driving up the share prices of producers and explorers and reminding investors that there is more to precious metals than gold and silver.

Palladium has a number of industrial uses. It's often found in electronics — including computers, mobile phones, and LCD televisions.

But roughly half of the global supply of palladium is used in the manufacturing of automobile catalytic converters, which convert up to 90% of harmful gases from auto exhaust like carbon monoxide into less harmful substances. 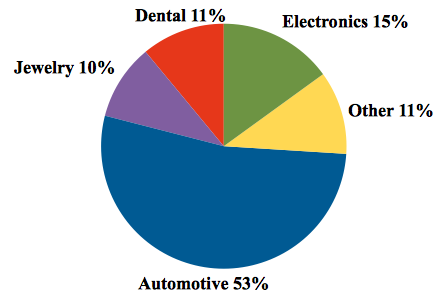 As such, the demand for palladium is generally correlated to the health of the global auto industry, which has rebounded from the brink of collapse. Automakers around the world have recently been reporting strong sales figures as the industry continued to see signs of recovery.

Meanwhile, Chrysler posted a 25% gain in April — the first double-digit increase for the automaker in nearly five years.

Toyota reported that its U.S. sales rose 24% in April from a year earlier, as incentives continued to spur demand.

Honda Motor says sales rose 13% from a year ago, while Hyundai Motors posted a 24% gain in sales.

Automobile sales have also increased in the world's #1 car market, China. China's automobile sales jumped 71% in the first quarter this year. Experts predict sales of automobiles in China to reach 16.5 million vehicles in 2010, a 10% increase from the 2009 level.

At a time when the demand for palladium is increasing, supply looks like it could potentially be constrained...

Norilsk Nickel is the world's largest producer of nickel and palladium. Each year the company produces about 2.5 million ounce of palladium.

But this isn't enough to meet the world's growing demand, so Russia fills the deficit from Gokran and the Russian Central Bank. However, there are rumors that these stockpiles are rapidly becoming depleted; the actual level of Russian palladium stockpiles is a state secret.

Rising demand and a potential for supply constraints has spurred heavy investment interest.

ETFS Physical Palladium ETF (NYSE: PALL) holdings have increased over 400% since first being listed in January, taking further supplies off the market.

Since most of the world's palladium comes from South Africa and Russia, investing in palladium stocks can be a bit tricky. There are just a handful of large North American palladium producers including Stillwater (NYSE: SWC) and North American Palladium (AMEX: NAP)

There are a few smaller companies exploring and developing similar nickel-copper-platinum-palladium projects — including one that I am particularly excited about...