Smart Investors Are Catching On

Obama came into office on a populous platform of "Change" and a Herculean promise of increasing employment through jobs in green, infrastructure, and health care sectors.

True, Obama took over the presidency already in the hole... But he failed to recognize the axiom, "When in a hole, stop digging."

To say he's failed on the jobs front is an understatement. For a libertarian like me, that comes as no surprise... I'm a true believer that presidents take unwarranted credit for a good economy, as they also get unwarranted blame for a bad economy.

But let's take Obama at his word... He is trying to help the economy.

The table below compares the White House's February 2009 projection of the number of jobs that would be created by the 2009 stimulus law (through the end of 2010) with the actual change in state payroll employment through September 2009 (the latest figures available).

According to the data, 49 States and the District of Columbia have lost jobs since the stimulus was enacted.

While President Obama claimed the result of his stimulus bill would be the creation of 3.5 million jobs, the U.S. has already lost a total of 2.7 million — a difference of 6.2 million jobs.

I'm here to tell you why only North Dakota is thriving in the recession.

That's Why We're Banking on the Bakken

You see, North Dakota is ground-central for the Bakken oil boom.

We brought you the Bakken story as an investment thesis nearly 2 years ago... when many of the public oil Bakken stocks were mere penny stocks.

We were spot on.

One of the Bakken stocks we've covered and recommended to you has seen a 1,300% increase since the March 2009 lows: 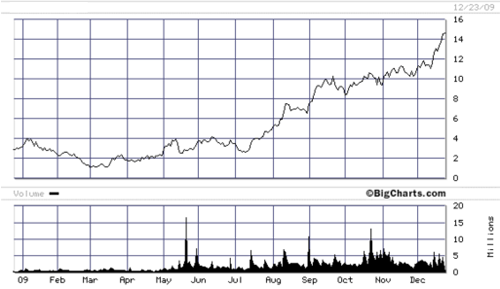 But this story — and the fortunes to be made — are far from over.

A recent Forbes article reported that North Dakota's oil production is expected to approach 350,000 barrels next year — an increase of more than 50 percent — due to a major pipeline expansion and the anticipated startup of a shipping terminal near Stanley (SXE) that will be able to haul 60,000 barrels a day by rail to refineries near the oil depot of Cushing, Oklahoma.

The 500,000 barrels-per-day is over three times what was coming from the Bakken two years ago... almost exactly the moment we invested in that thesis.

465,000 bpd from Montana and North Dakota would be 14 million barrels of oil per month.

So, U.S. Bakken would account for over 8% of US oil production. Not too shabby.

It turns out that we've also made an extremely profitable mistake, too. You see, we may have underestimated the amount of oil in the Bakken — and keep in mind, the oil production technology for the Bakken is still improving.  In this free bonus report, you can catch up on the latest Bakken development, as well as one small oil company that has netted a healthy 45% gain for our readers— and is still climbing. To access this special report, simply click here.

I don't care what anybody says... it will take years... decades, even, for the U.S. to wean itself off of oil. And that means the Bakken will remain a lucrative play for the foreseeable future.