When it comes to the Enterprise Ethereum Alliance (EEA) announcement, it feels like Ethereum investors have been waiting for months.

In that time, Ethereum really struggled. The digital currency dropped from a high of $420 to a heartbreaking low of $130 last Sunday.

The drop was triggered by a variety of factors, including:

That last point is important. For a while, there wasn't any positive news to propel Ethereum buying. The token was trapped between the negative news cycle of Bitcoin and a lack of news from its own founding team.

But now, the EEA announcement is here. And even though Ethereum didn't rally to its previous highs, it did see a $60 jump.

There have been rumors that Mastercard would join the EEA. Wealth Daily alluded to those rumors back when an EEA announcement seemed imminent. But the best proof we had was a cached web page where Mastercard's involvement was leaked to the public.

But it's not a mystery anymore.

Mastercard, along with 33 other companies, were included as EEA members on July 18th. Other major names include Cisco Systems and Scotiabank.

Ethereum's price reacted. Buoyed by renewed investor confidence, the token gained almost $60 in value. Its daily high was in the $250 range.

That price jump may not rest on the EEA alone. Bitcoin also is getting close to resolving its own scaling issues, a problem that was weighing down Ethereum.

But Is Ethereum a Ticking Time Bomb?

On the tailwind of the EEA announcement, investors also heard news from Ethereum cofounder Charles Hoskinson. Hoskinson stepped forward to address one of the major causes of recent Ethereum volatility, ICOs. He went as far as to say that ICOs have transformed Ethereum into a "ticking time bomb."

For those of you who haven't been following our digital currency coverage, ICOs are a new way for start-up ventures to generate capital without going through the traditional private equity or equity crowdfunding routes.

Since the start of 2017, dozens of companies have raised funds for their products or concepts in Bitcoin and Ethereum.

This method of fundraising is controversial.

Initially met with skepticism, most ICOs are now openly rebuffed by analysts and financial writers. There is no regulation in place to protect investors if a company behaves unethically.

Of course, some companies may be worth the investment. They may create a product that could rival Ethereum in value one day. But with 700 digital currencies on the market, an investor needs to be careful when deciding what to devote Ethereum or Bitcoin too.

Just look at the amount of ICO funding that was raised in 2017. At first, the staff at Wealth Daily and I thought that ICOs would operate as a form of investing Darwinism, removing uneducated investors from the cryptocurrency pool. But now, with each ICO managing to raise more funds than its predecessors, our hopes have been dashed. 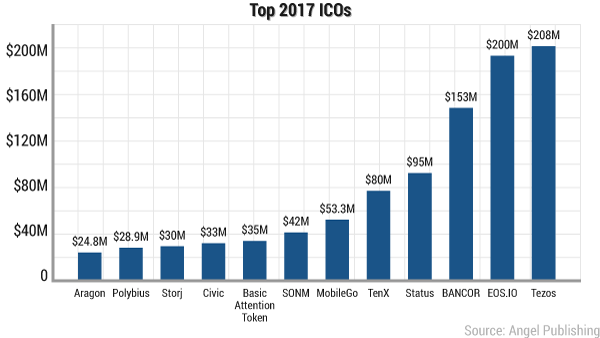 We have to look at ICOs for what they are: A potential danger to Ethereum's overall development.

People say ICOs are great for Ethereum because, look at the price, but it’s a ticking time-bomb. There’s an over-tokenization of things as companies are issuing tokens when the same tasks can be achieved with existing blockchains. People are blinded by fast and easy money.

It's true that ICOs snare investors who are looking to make a quick buck. Every investor's dream is to become a millionaire overnight. So, no one can fault people for riding the ICO train right into destruction.

Other analysts are more optimistic about the role ICOs are currently playing in the world of cryptocurrencies.

They see the current ICO craze as an echo of the dot-com bubble. But instead of providing empty promises, like many companies in the dot-com bubble did, many ICOs are generating unique, powerful technologies that will lay the framework of our society in the years to come. Such companies will rise above the ones that fail.

We are too early in the game to know anything for certain. For now, investors seem reassured after Ethereum's $60 dollar rally and Bitcoin's rise. And we're heading into the weekend on a more positive note.