Plus, What BP Doesn't Want you to See...

Meanwhile, according to the New York Times, "Journalists struggling to document the impact of the oil rig explosion have repeatedly found themselves turned away from public areas affected by the spill, and not only by BP and its contractors, but by local law enforcement, the Coast Guard and government officials."

Even Matt Gutman of ABC News was hassled by BP as he tried to set up equipment for a live Web cast on a public beach in Alabama.  And CBS News recently reported that a crew was threatened with arrest for "filming on a public beach."

And I'm sure the wildlife is enjoying their new oil-drenched homes, and oily deaths... but hey, leaving the dividend intact and pleasing our overseas friends is more important, right?

Here's some of what BP is trying to prevent the public from seeing.

This doesn't include the turtles washing ashore.

Or the dolphins washing ashore.

Or the thousands of people who's lives depend on this part of the world... or many of the others in the wild life not pictured below.

Or the many pictures showing just how bad the spill looks in the waters.

Just imagine what happens when a Hurricane blows through.  BP should have fun paying for all the oil that'll drop on miles of land. 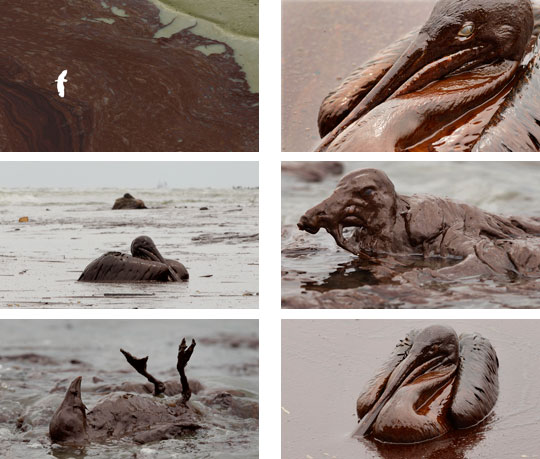 Still, people are buying the stock because they think it's cheap.  They're wrong.  It'll get cheaper.

When all is said and done, BP will owe billions of dollars... and will be lucky to walk away as a shell of its former self.  Short the stock.  It's going down... as it should.

I may be known as a trader that'll go after anything for a gain...but this is heartbreaking real stuff that's happening.  The fact that BP is more concerned about their global image than stopping the problem by arresting the press says a lot about this company.