Kurdish Oil Ban: What it Means

Divide and conquer – the most effective tactic of any insurrection – seems to be giving the Islamic State of Iraq and Syria (ISIS) all the momentum in its push to confiscate Iraqi territory.

Exceptionally violent, vicious and murderous though they are, unintelligent they are not. They know precisely how to vanquish the Iraqi nation: by pushing like a wedge through the center of the country and dividing it in half along its two ethnic and religious lines – separating the Sunni Kurds to the north from the Shiite Iraqis to the south.

Rather than set aside their differences and unite against a common foe who is threatening to tear their nation apart, the two regional factions in Iraq are playing right into ISIS’ hand by quarrelling between themselves. And of all issues, they are arguing over the last thing they can afford to fight about – oil, and who has the right to sell it.

The Iraqi central government in Baghdad had banned all sales of crude oil originating from Iraq’s northern Kurdistan region – this at a time when money is sorely needed to combat the ISIS faction’s advance. Meanwhile, the well-funded ISIS armies are taking advantage of Iraq’s disunity to capture more ground.

To understand why Iraq is deliberately restricting its own oil exports and forgoing sorely needed revenue, we need to understand the nation’s division along ethnic and religious lines.

While Western nations are accustomed to a blend of ethnicities and faiths, much of the old world prefers segregation along ethnic and religious lines.

Unfortunately, when Western powers redrew maps and borders in the middle east at the end of the First World War, little notice was taken of this segregationist preference. When the then defunct Ottoman Empire was cut up into pieces, they simply drew new lines on the map irrespective of the region’s ethnic and religious cultures.

One such culture – the Kurds – saw their acenstral territory of Kurdistan divvied up amongst Turkey, Iran, and newly formed Syria and Iraq. Down to this day, Kurdistan still straddles multiple national states as per the map below. 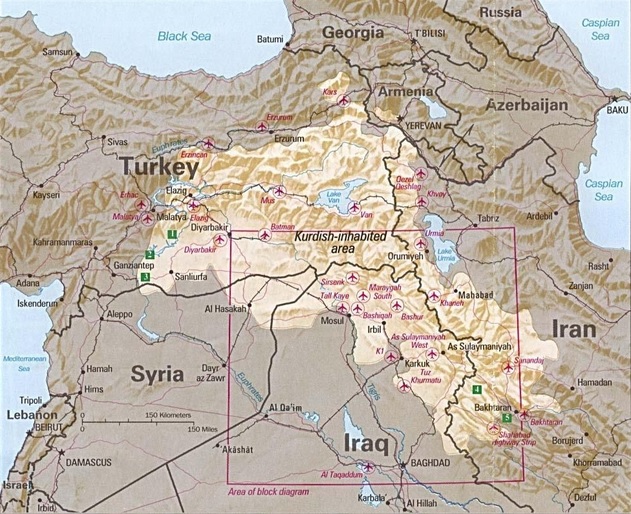 Yet the story for the Kurds living in northern Iraq is made ever more tense by religious differences with the majority of Iraqis to the south. Where the Kurds to the north practice the Sunni branch of Islam (as do most Muslim nations, including Turkey, Syria, Saudi Arabia, Egypt and others), the majority of Iraqis in central and southern Iraq are of the Shia branch of Islam (as is Iran).

For decades, all Kurdish peoples from Turkey to Iran have been pressing their cause for an independent state - which over the years has resulted in Kurds being massacred in Turkey and Syria, and gassed by Saddam Hussein in Iraq.

Their cause took a giant leap forward during the first Gulf War in 1992, when Allied troops battling Saddam Hussein’s forces established bases in Kurdish territory in northern Iraq. After the war, the Iraqi Kurdistan region emerged as an autonomous entity with its own local government and parliament – known as the Kurdistan Regional Government, or KRG - a development which greatly strengthened Kurdish ties with the West.
While Turkey had once feared that an independent Kurdistan would result in the loss of a major portion of its southeastern territory, the recent ISIS insurgence seems to have swayed Turkey’s stance.

“On 28 June 2014, Hüseyin Çelik, a spokesman for the ruling AK party, made comments to the Financial Times indicating Turkey's readiness to accept an independent Kurdistan in northern Iraq,” reports Wikipedia. Turkey likely favors an independent Kurdistan in northern Iraq as a buffer against an ISIS controlled central Iraq should the revolution be victorious.

Western governments would also like to see an independent Kurdistan in northern Iraq, whose pro-West leanings would grant the West a convenient location from which to keep tabs on the rest of Iraq and even neighboring Iran.

It seems the only ones opposed to an independent Iraqi Sunni Kurdistan to the north is the Iraqi Shiite government in Baghdad in the south. Hence the ban on Kurdistan oil exports in an effort to cripple the KRG’s economy and squash its quest for independence.

Baghdad’s Ban on KRG Oil Sales – What are they Thinking?

Remember that autonomous regional government in Kurdish northern Iraq established in 1992 after the First Gulf War? The KRG was fortunate enough to inherited one of the richest crude oil deposits on the planet.

“KRG-controlled parts of Iraqi Kurdistan are estimated to contain around 45 billion barrels of oil, making it the sixth largest reserve in the world,” informs Wikipedia.

The KRG then started signing direct contracts with foreign oil companies, such as Exxon in 2011, bypassing Baghdad’s authority over the oil fields in northern Iraq. The KRG took another step in defiance of Baghdad by signing direct agreements with foreign governments, such as with Turkey in 2012 for an exchange of Turkish refined petroleum for KRG crude oil.

Needless to say, the Iraqi government in Baghdad was none too pleased with the KRG’s disregard for its authority. The steady stream of money flowing into Iraqi Kurdistan would soon empower the increasingly rebellious Kurds to proclaim their total independence. So Baghdad recently decided to hit the KRG where it can do the most harm – its pocket book.

The Iraqi government in Baghdad has started filing law suits against foreign buyers of KRG crude, asserting that such purchases are illegal without Baghdad’s expressed consent, and that any taking of possession of KRG crude would be considered theft of Iraqi goods and property.

The only two American buyers of Iraqi Kurdish crude oil (that we know of, anyway) – namely LyondellBasell Industries N.V. (NYSE: LYB) and Axeon Specialty Products – have now stopped receiving oil from the KRG.

“In light of the dispute over the rights to sell crude oil originating from the Kurdish region of Iraq, Axeon will not purchase or accept delivery of any of the affected crude oil until the matter is appropriately resolved,” the latest refusal noted.

Reuters reports at least $240 million worth of Kurdish crude oil remains undelivered in U.S. and Moroccan ports since June.

“Until the legal dispute [between the Iraqi government and the KRG] is resolved, it seems unlikely the Kurds will be able to find U.S. buyers willing to take cargoes,” Richard Mallinson at Energy Aspects in London assessed. “It is not yet clear that the KRG and a new federal government [in Baghdad] will be able to set aside their disagreements and reach a deal over Kurdish oil exports any time soon.”

Meanwhile, ISIS keeps advancing across central Iraq, pushing north toward Iraqi Kurdistan and south toward the capital of Baghdad, as the following map shows. 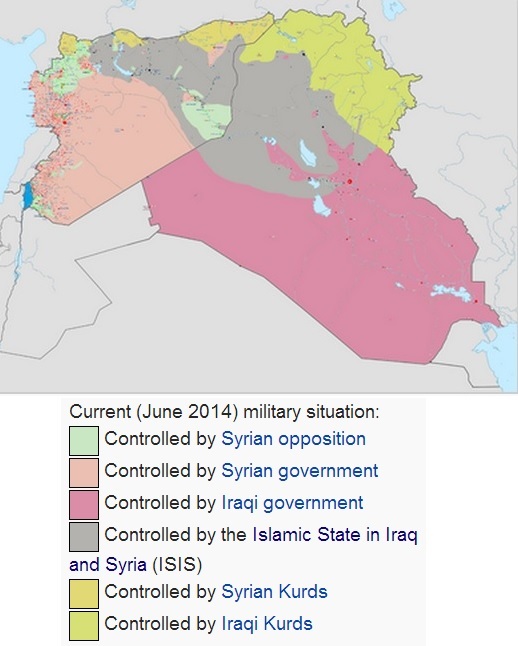 Cooler heads might at least see the need to set aside any differences and unite against a common foe, which

U.S. President Obama is urging both sides to do.

What Baghdad fails to realize is that unless it bands together with the northern Kurds to fight ISIS – which is already on the capital’s door step – it will lose a lot more than just the north, but the entire Iraqi nation.

Investing in Frontier Markets
If you like emerging markets, you're going to love frontier markets... at least if you like making money.
Controversial Biotech IPO Could Be Big Score
A biotech company is looking to go public so it can wage patent war against the maker of a successful multiple sclerosis treatment.
The Science of Penny Stocks
Don't let the term "penny stock" intimidate you... Some of the market's biggest players started off in the same boat as these micro-cap firms.
Buffett's Envy: 50% Annual Returns, Guaranteed
Warren Buffett once told investors at an annual shareholder meeting, "...it's a huge structural advantage not to have a lot of money. I think I could make you 50% a year on $1 million. No, I know I could. I guarantee that."