Three weeks ago, a momentary slip of the tongue by Tesla lead singer Elon Musk sent the tech world into an instant frenzy.

While addressing workers at the recently opened Tesla gigafactory in Berlin, he made the following remark:

I think there's an interesting potential for manganese.

It sent journalists around the world running to their laptops as a wave of speculation rose about a paradigm shift for the biggest rechargeable battery-maker in existence.

Could lithium, the reigning king of cathodes, finally be replaced?

You see, it wasn't what Musk said, but rather what he avoided talking about, that could have a far bigger impact on the battery industry of tomorrow.

His comment about manganese was prompted when a reporter asked him about another potential candidate for the next generation of high-performance batteries — graphene.

Musk largely avoided giving a straight answer, stating that graphene was too difficult to make in large quantities, and steered the conversation away from the topic, as he's often known to do.

But the truth behind graphene is far more striking than Musk made it out to be.

Why Is Musk Mum on the Topic of Graphene?

For those unfamiliar, graphene is a revolutionary form of carbon that just 12 years ago won its researchers the Nobel Prize.

It has been called a "miracle material" by engineers, boasting 200 times the strength of steel at only one-sixth the weight, with excellent electrical conductivity and unparalleled elasticity. 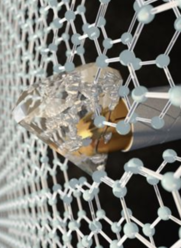 Back in 2010, this nanostructure was one of the most difficult materials in existence to create — purportedly costing tens of thousands of dollars to produce just a square inch of the one-atom-thick material.

It was precisely that difficulty in production that Musk was referencing in his answer to the press last month, but there is now good reason to believe his caginess was itself manufactured.

A lot of work has been done in the last 12 years. Breakthroughs have been made.

Graphene is no longer the largely theoretical material that it was back in the early days.

Today, a new method for producing this 2D nanostructure is allowing for the manufacture of unprecedented quantities at a cost orders of magnitude lower than before.

That, in turn, is making all of those theoretical applications more and more real every day.

Given the revolutionary potential of graphene — across a wide spectrum of applications — it is highly unlikely that Musk is not up to date on the progress made in simplifying and scaling the process.

In fact, he is almost certainly keeping a very close eye on every step of the progress.

He's not talking about it to the press for a different reason.

You see, one of the most valuable applications now emerging from the theoretical realm is the aforementioned graphene-based rechargeable battery.

As you read this, there is a company in operation whose sole mission is building and marketing a functioning graphene aluminum-ion battery.

A relative newcomer to the field, this tech firm is already using the proprietary production method to create cheap graphene out of highly abundant natural gas.

Not only that, but as of last December the first generation of graphene-aluminum batteries was already in production at the company's pilot manufacturing facility.

I'll get into more detail about all that in a minute, but first, you need to grasp the magnitude of the benefit graphene-based batteries can bring.

Up to 3 Times Longer Service Life... Up to 70 Times the Charge Speed... Zero Lithium

While the first two advantages will make EV producers like Tesla and Rivian (not to mention owners) salivate, it's the third item that could prove to make the real difference.

Here's the problem: Lithium, the current benchmark for modern rechargeable battery cathodes, is also one of the most troublesome supply chain conundrums faced by modern industry.

China, whose dictatorial regime is anything but friendly with the West and the U.S. in particular, is rapidly buying up lithium production capacity and reserve-bearing properties across the world.

By the end of the decade, as much as 70% of global reserves might be in the hands of the Chinese Communist Party (CCP).

Mind you, that's before we take into account that spiking demand for lithium-based storage capacity is already outstripping supply.

China is currently the world's second-biggest manganese producer, after South Africa. By the end of the decade, the CCP will likely be the world's No. 1 supplier of the metal.

By contrast, graphene, which can now be made using natural gas as the primary raw material, is about to become more abundant than ever.

There are no supply chain issues, and the end product, as the service life and charge-speed figures clearly indicate, is in a different universe in terms of performance.

Just imagine being able to charge your Tesla in less times than it takes an owner of a gas-driven vehicle to fill the tank.

Imagine being able to own it for three times longer without major repairs or overhauls.

In 10 Years, All Your Batteries Could Run on Graphene

That's just the beginning of the story for graphene battery power. Enhanced reliability, safety, and even more improvements in performance will soon make the lithium standard — or any manganese-powered alternatives, for that matter — hopelessly obsolete.

The company I mentioned that's pioneering graphene battery technology is already a good ways down the road of research and development.

In December 2021, it initiated operations at its first battery production facility in Brisbane, Australia.

Just three weeks later, the company sent out prototype graphene batteries to prospective clients around the world for testing and validation.

In March of this year, the firm signed an agreement with Wood PLC, one of the world's foremost engineering consulting brands, to develop expansion plans to scale up graphene production.

All of this points to several facts. First of all, the technology is viable. Second of all, the company is starting to move away from research and development and toward commercialization.

That makes now the Holy Grail moment for investors, because while the market capitalization for this company still hovers in the $300 million range, it is now closer than ever to taking a serious piece out of the $40 billion-per-year lithium-ion market.

The Next Few Minutes Could Make All the Difference

Unlike most companies in this pre-commercialization stage, this particular firm is already public and trading on multiple North American exchanges.

You can literally buy its stock online right now, sit back, and wait for the revolution to start.

Before you do anything like that, however, you should get all of the facts and understand all of the risks.

To make this easier for you, I've put together a quick and concise video that explains the science, the engineering, and the market that it will impact.

It will take a few minutes, but you will emerge informed and ready to make a decision.

Access is instant and completely free of charge, but the information you receive just may be priceless.

P.S. What if I told you Forbes recently revealed that a new billionaire is created every 17 hours? It can often seem like the rich are only getting richer. So where does that leave you? With the help of my colleague Alexander Boulden and his trading system, you have the chance to gain control over these rich insiders and beat them at their own game. His system pinpoints exactly which stocks are on the verge of soaring next. Alexander has spent years testing this trading system so people like you can start enjoying their lives the way they were meant to. Join Alexander’s Insider Stakeout to learn more about this trading system and the man behind it.