Is Elon Musk Running for Office?

I know it’s a silly headline, but his math is getting more and more like a politician’s.

A month or so ago, good old Elon put a poll up on Twitter asking if he should sell 10% of his stake in Tesla. The twits said yes, so he started selling.

He explained that he was really selling to cover a $3 billion tax bill he had coming. But that was a lie.

I called him out on the lie right away. So did a lot of my colleagues. But he stuck with it.

He needed to pay the taxes. But then he sold $3 billion worth of stock… and kept on selling.

As of the time I’m writing this article, Elon Musk has dumped over 12 million shares of Tesla stock onto the market. That adds up to nearly $13 billion.

That’s enough to pay his taxes four times over. And he’s likely not done selling, either…

By the end of the year, it’s likely he’ll have sold around 17 million shares, or $18 BILLION worth of his own company’s stock!

The stock was at a peak. It was massively overvalued. He knew it. And he’s been saying it for years.

Perpetual motion has been a goal of engineers throughout history. A machine that could run forever without needing additional power could completely change the world.

And while they’re still working on perpetual motion, a group of scientists and engineers may have just created the next best thing.

It’s a fuel that creates zero carbon emissions and yet can send a jet flying nearly six times the speed of sound. And it’s poised to completely revolutionize the energy sector in the coming years…

And make Tesla and all of its battery-powered cars obsolete.

That’s why Elon Musk is unloading his shares at the peak. He knows there are no more peaks coming. Once this fuel hits the markets, nobody is going to want a Tesla ever again.

And once word hits the stock market about the company that’s designing the fuel, nobody’s going to want to own Tesla stock ever again either.

They’re all going to want to sell their Tesla and buy a car that can run on this carbon-neutral rocket fuel.

And they’re going to want to sell their TSLA and buy the stock of the company making the fuel of the future.

That’s because Tesla just can’t compete with a company like this. For a Tesla to help you and help the planet, you’ve got to buy a Tesla.

For this company to help you help and help the planet, you’ve just got to make some minor modifications to the car you’re already driving.

It’s called retrofitting and, surprise, it’s WAY cheaper than buying a whole new car. It’s better for the planet too.

And that’s exactly what you can do with this company’s new fuel technology. In fact, here’s a regular old internal combustion-powered truck: 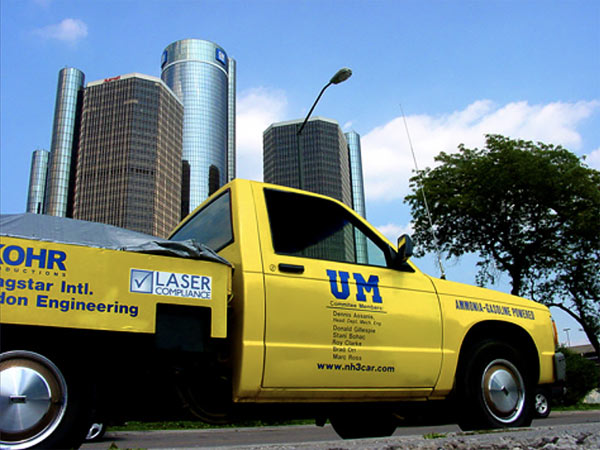 Notice anything different about it? No?... Exactly. It’s just a regular old truck. Except that it’s had a few minor modifications so that it can use this new fuel.

And using said new fuel, it was able to drive from Detroit to San Francisco… and only had to stop to fill up once on the way.

That’s a 2,393.6-mile trip, give or take a few miles depending on your route. In a Tesla with its biggest battery, you would have only needed to stop to recharge six times. And for only eight–12 hours each time.

Cheaper, better, faster, greener. It’s a "Tesla killer" if ever there was one.

To be completely honest, Elon might be selling his Tesla shares so he can buy as much of this company’s stock as possible before the rest of the world finds out.

And whether he is or not, that’s exactly what I want you to do. If you own Tesla stock, sell it.

You see, this company’s technology is already making waves all over the world in the maritime industry. Countless ships are being retrofitted to use its fuel.

Industrial companies see the value it represents. So do militaries. So do agriculture operations and miners.

And they’re all getting ready for the future by getting ready to use this fuel. It’s only a matter of time until it makes it into personal vehicles and recreation vehicles, too.

I want you invested before that happens so you can get a piece of the biggest part of the profits.

This stock is only going to fly under the radar for so long. People are going to uncover it.

And when its fuel is powering the majority of cars on the road, its share price is going to be 10 times, maybe even 100 times higher than where it is today.

So take some time today and get yourself invested.

I’ll be back after the holiday with more ways to build your personal fortune.

And whatever you celebrate, I hope your weekend is full of cheer and warmth.