How the UAE could corner the Diamond Market 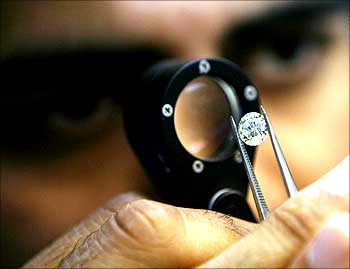 The diamond capital of the world is in Antwerp, Belgium, where $55 billion worth of diamonds were traded last year. However, Antwerp Diamond Bank shut down its global operations last year, despite once being a major player in the field.

To fill in this gap, the National Bank of Fujairah (NBF) has said it will step in to meet the financial needs of manufacturers and traders in the diamond business.

The NBF is located in Fujairah, which is one of the seven emirates that makes up the United Arab Emirates (UAE), although Dubai and Abu Dhabi are the more well known emirates of the UAE.

Diamond trading in the UAE has expanded to over $35 billion, making it a competitor for Antwerp.

The UAE, and Dubai in particular, have become well known for big buildings, man-made islands, tourism, luxury, and a global financial center. For a Middle Eastern country, oil has largely taken a backseat to the tourist and financial industries.

The UAE is something of a benevolent dictatorship, particularly in an economic sense, as taxes are extremely low and there is little government interference in the marketplace, at least economically speaking.

The government of Fujairah is a major stakeholder in the NBF, so this may seem like a bit of a contradiction. There is no question that the government in the UAE is involved in business, but it is in a different sense. The individuals in government want business to succeed, as they are essentially shareholders. It's not like the U.S. where politicians just get payouts from big business as protection money.

This isn’t to say that the UAE is a perfect model of government. It's far from it. But the UAE is far more economically free than the United States, or probably anywhere else in North or South America.

Although the NBF is partially government owned, this is still a positive development for global trade and competition. The bank already is heavily involved in jewelry and gold, and it's adding the diamond business to its portfolio.

The diamond industry itself is quite far from being a free market industry. The De Beers company had a virtual monopoly on the diamond market for a good part of the 20th century. Whenever you see something like a global monopoly, you can be sure that there is heavy government intervention involved.

But we must realize that the NBF is operating on a global scale and going up against global competitors. It's not as if the government there can easily protect this bank or any other bank from global competition. The NBF will have to perform well and provide a much wanted service if it's going to compete successfully.

For these reasons, the entrance of the NBF into the diamond financing market is an overall positive factor for the diamond industry and for more economic competition in general.

This is just one example of where a bank in the UAE is picking up a piece of business where it saw a hole. We should expect this to happen in other industries and in other countries.

This is good news just in the sense that it puts something of a limit on out-of-control government, even in places like the United States. We live in a global world now and other people and other companies in other countries are willing to pick up the slack where consumer demand is not being met.

The U.S. auto industry has basically failed against Asian companies. The U.S. government (and the state of Michigan) essentially brought down the U.S. car industry with its regulations, and now it is the government propping it up and keeping it from going under.

We can expect the same thing to happen in any other industry where there is heavy involvement by the U.S. government. Medical care comes to mind. I'm waiting for more companies to pop up in other countries that serve the medical needs of Americans who are seeking low-cost medical care.

The diamond industry is just one industry that's being set free gradually and seeing more competition enter the picture. It will happen with other industries as well.