It's Not Just About Residential Development

Since construction is a leading indicator of economic strength and expansion, you might say the global economic recovery is cemented in cement.

Recent poor manufacturing and export reports out of China and other emerging markets have raised concern that the global recovery is about to stall, which should decrease the demand for concrete, cement and other construction materials considerably.

But the recently updated “Global Concrete and Cement Market – Key Trends and Opportunities to 2017” report has some surprises. Even though global manufacturing growth is expected to slow, the demand for cement and other materials is projected to rise considerably.

Given construction’s close ties with economic expansion, cement consumption is highly reflective of the overall health of the global economy.

As shown in the graph below, global Portland Cement consumption - which amounts to almost half of all cements used - closely mirrored the fall of the last global recession of 2007-09, and its recovery since then. 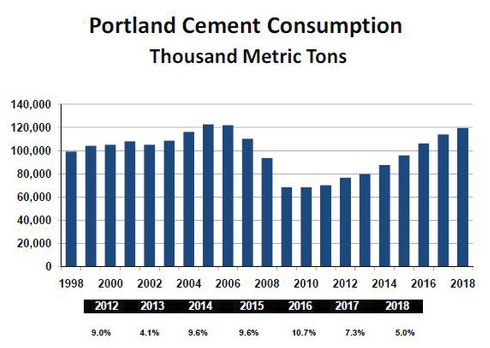 Yet despite recent reports out of China and elsewhere pointing to slowing GDP growth, cement consumption is expected to grow solidly to 2018, as indicated along the bottom of the graph.

In the U.S., The Portland Cement Association expects demand to increase 9.7% in 2014 and 2015, with “nearly two-thirds of the anticipated growth… caused by gains in the residential construction market,” Ed Sullivan, PCA chief economist predicted. “Home inventories [in the U.S.] are declining, signalling that it is time to start building, while the lingering effects of damaged credit due to foreclosure activity have created a robust apartment demand.”

According to industry Analyst Amal Ahmad at economic research firm IBISWorld, “construction activity at home and abroad is expected to stabilize as economies recover fully from the housing boom and bust, and as emerging market growth steadies.”

How steady is it expected to be? “In terms of growth,” the recently updated Global Concrete and Cement Market – Key Trends and Opportunities to 2017 report predicts, “refractory cements, mortars and concretes is expected to be the fastest-growing category in the global concrete and cement market over the forecast period, with a CAGR of 9.62%.”

This robust growth comes despite evidence of slowing manufacturing in China. “A sharp decline in the demand for Chinese products,” the reports explains, “means that net exports have ceased to be the driving force behind the Chinese economy. Furthermore, debt and investment-fueled economic growth has accelerated the Chinese total debt-to-GDP ratio; development that will force the Chinese to reduce spending on manufacturing capacity.”

As a result of slowing exports, the Chinese government has been cutting back on expanding its manufacturing capacity, resulting in lower demand for steel and electricity in addition to cement. Steel prices fell to a record low of 3,380 yuan a tonne, while iron ore prices fell to seven-month lows and cement prices have fallen to two-month lows of 350 yuan a ton.

“It will be a few more months before we hit the bottom,” Frederic Neumann, an HSBC economist in Hong Kong noted. With interest rates steadily on the rise, “It may take more aggressive measures from the government to turn things around.” Chinese GDP is expected to drop to 7% in 2014, possibly even falling to 6.5% before the year is out – its lowest level since the global recovery began in 2009.

The Indian construction industry is also experiencing subdued growth, especially in light of slowing foreign investor interest due to a falling currency and rising inflation and interest rates.

Yet the updated report shows something of a shift taking place in all markets, Western and developing alike.

“The general outlook for construction activity in China and India over the forecast period is positive,” the report stresses. “Construction activity will be driven by demand side factors such as growth in nuclear families, urbanization, an increase in disposable income and the urgent need to support investment in physical infrastructure.”

Therein lies the switch… while the expansion of manufacturing capacity is slowing, the demand for public works, housing and infrastructure is still growing.

A similar shift in priorities is expected in the U.S., with Sullivan predicting annual cement demands from 9.7% in 2014 to 11% by 2016 on increased spending for public construction projects, bridges and other infrastructure upgrades. Even as rising interest rates and higher home prices are expected to slow home construction over coming years, increased public works and infrastructure spending will keep cement demand growing.

In Europe, which the report acknowledges is “struggling to find a balance between austerity and economic growth”, “domestic investment and demand are expected to improve in 2014, strengthening GDP growth. Russia, which is Europe’s second-largest construction market after France, is expected to be the main source of future growth in the region.”

A Solid Investment Foundation in Cement

So even though manufacturing growth is expected to trend sideways to slightly lower in coming quarters, nations around the world from developed to developing still have a need for vast infrastructure spending and urban development – especially in China, which is working on moving 10 million people from rural villages to urban cities each year for 30 years. Now that’s going to require a lot of concrete.

Neither should it surprise us that 8 of the top 20 cement producing companies are located in China – with 3 of the top 6.

Investing in cement producers can be a little tricky for American investors, since all of the major players are foreign owned. But if you have access to the OTC market, here’s where you might look:

• China-based China National Building Material Company Ltd (CNBM) on the Hong Kong Stock Exchange (HKSE: 3323-OL) is the third largest producer at 200 million tons per year, and arguably the one with the greatest market growth potential atop the world’s largest concrete consumption market. Its stock has risen 388% from under $1.8 in 2009 to some $7.8 today.

While manufacturing worldwide is expected to slow into a sideways pattern over the next year or two, cement demand is still expected to grow at an average of 10% per year into 2016, averaging 6% per year after that until 2018.

Since the recession five years ago, government spending has been focussed on industry and banking, to the neglect of infrastructure. That infrastructure cannot be ignored any longer, and will see increased spending over coming years - keeping the growth of the concrete and cement industry firmly cemented.