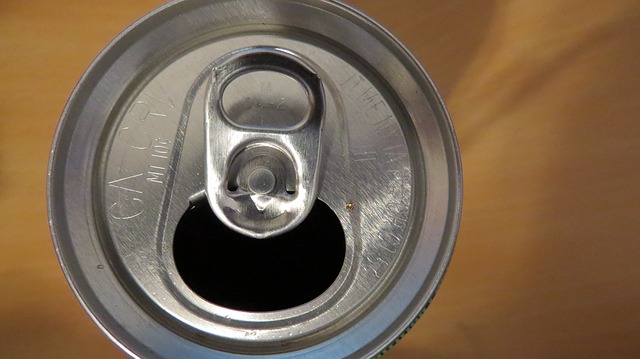 Perhaps the most obvious trait that distinguishes man from beast is his use of tools.

Although many animals make use of objects like rocks and sticks to accomplish certain tasks either directly (such as primates inserting twigs into ant hills to draw out ants) or indirectly (such as marine birds dropping shells onto rocks to break them open), man is unique in that he is the only creature that constructs his tools out of other materials, forming new objects and new materials that do not exist naturally.

From fabrics and cloths, to bricks and pillars, to knives and swords, humankind has the capacity to imagine combining items or substances, and to predict what they would be together. This is the magic behind not just the use of tools but also their making – man’s uncanny ability to perceive how something would appear or perform after being manipulated or changed in one way or another.

Tools were that which first separated man from the animal kingdom, and are that which have kept him evolving ever since. In fact, tools have been so critical to man’s progress that entire stages of his development have been defined by the materials used in his tools. From stone age, to bronze age, to iron age, tools and the substances they were made of shaped humankind into what we are today.

Every material had its era, often overlapping with others. Within that basic division of stone, bronze and iron we can define several other periods based on the materials prevalent at the time – such as a clay pottery age, a glass age, and a steel age, each introducing not just a new material of man’s creation, but an entirely new way of living.

Pottery allowed us to transition from nomadic hunter-gatherers to established settlers, as it allowed us to preserve our food and transport our water to us, instead of our having to move after it. Clothing allowed us migrate into more diverse climate zones and regions we never populated before. Bricks and timbers allowed us to construct permanent cities with defences that grew into empires. Iron and steel have allowed us to develop railways, ships, and skyscrapers that again changed how we live and how far we can travel.

So where are we now? If you had to place present-day humankind into an age defined by a particular material that has transformed our lives enough to make it stand out as its own unique age in history, what material would you choose?

It would have to be something after steel that takes us places where steel can’t and improves our lives in ways steel can’t. It would also have to be economically accessible in order for it to become widespread enough to overtake other materials in its pervasiveness throughout human society.

It must also address the chief concerns currently facing humankind. In the past, each new material was embraced not only because it served a useful purpose, but also because it satisfied an important need better than anything else at the time. One of man’s greatest concerns today is his environment, so our next age material must also address that.

The material that satisfies all those criteria enough to be regarded as an age of man would have to be aluminum, a remarkable material that is changing the way man lives and interacts with his environment.

As the third most abundant element on Earth behind oxygen and silicon, and as such the most abundant metal, around 8.3% of all atoms in our planet’s crust are the element aluminum. With an atomic weight of 13 (the number of its electrons), aluminum is also one of the lightest and softest metals.

With such pervasiveness, it is not surprising that the ancients would have known about it and made use of it. But not in the form of aluminum metal as we know it today. Since aluminum atoms bind very easily with oxygen atoms, nearly all aluminum exists as part of oxides and silicates (oxygen-rich minerals). Aluminum atoms in a free state are limited to oxygen-deprived regions such as inside volcanoes and deep ocean seeps or vents.

The ancients knew it only in its various compounds. Archaeological evidence shows aluminum compounds were used as early as 5,000 BCE by the ancient Persians in pottery made of aluminum-rich silicates (such as feldspar, the most common group of minerals). There were then used from 4,000 BCE by the Egyptians and Babylonians in dyes and cosmetics made from alum (derived from aluminum sulphates, or salts). Roman historian Pliny in his writings describes the use of alum (which he called “alumen”) in dyes, as well as in medicine as an astringent (which contracts and seals lacerated tissue).

As an element, though, aluminum wasn’t officially discovered until the early 1800’s by English chemist Sir Humphrey Davy. A few years later, the French geologist Pierre Berthier discovered that aluminum existed in large quantities in a hard, reddish clay which he found near the village of Les Baux in southern France, thus naming the clay “bauxite”.

Today, bauxite is mined the world over as the richest source of aluminum, containing some 35-50% aluminum in the form of aluminum oxide (aluminum fused with oxygen). Because the zones of greatest aluminum concentrations lay below iron-rich surface rock, bauxite is most easily mined in regions with extensive weathering, such as in the tropics.

Yet as abundant as the element is, it took modern chemistry to finally extract aluminum from its naturally occurring compounds. Since its development in 1887 by Russian Carl Bayer, the “Bayer process” of extracting aluminum oxide from bauxite and then refining it into a usable metal has ushered-in the age of aluminum that has changed our way of life.

Its light atomic weight gives it a high strength to weight ratio. Its softness and malleability relative to other metals make it highly versatile. “No other metallic element can be used in so many ways across such a variety of domains, like in the home, in transport, on land, sea and in air, and in industry and commerce,” physics researcher Sam Davyson describes its usefulness.

Aluminum’s resistance to corrosion makes it ideal in packaging from foil wrap to containers, changing the way we keep and consume our foods. The metal is also one of the most efficient materials to recycle, using only 5% of the energy needed to produce new aluminum from ore to finished product, while still retaining almost 100% of its natural pre-recycled qualities.

Its high strength to weight ratio also makes it an indispensible material in automobiles, trains, aircraft, spacecraft, and other applications where fuel consumption or lift are a concern. A new technique called “high-pressure torsion” in which aluminum is pressed under extremely high pressures reaching 60,000 kilograms per square centimetre with a slight twisting motion is now producing aluminum that is as strong as steel. The high pressure and twisting deforms the metal’s lattice structure, realigning the atoms, compressing their volume, and resulting in stronger bonds between the metal’s grains.

“When the team subjected an alloy of aluminum called aluminum 7075 (which contains small percentages of magnesium and zinc) to the process, the metal attained a strength of 1 gigapascal,” reported Science Magazine in 2010. “That's equal to some of the strongest steels and more than three times higher than conventional aluminum. A meter-square plate of the processed alloy could withstand the weight of a fully loaded aircraft carrier.”

All these remarkable qualities combined – its abundance, light weight, strength, versatility and recyclability – make aluminum perhaps the most important metal of our time, especially in light of man’s current economic and environmental concerns.

Make Your Portfolio Part of the Solution

Perhaps the best known aluminum producer is Alcoa (NYSE: AA), one of the oldest companies in America, founded in 1888. Although it is the fourth largest aluminum miner (behind China’s Chalco, Russia’s Rusal, and Canada’s Rio Tinto), Alcoa is the world’s second largest alumina producer (behind China’s Chalco). [Bauxite -> alumina -> aluminum, is the processing order.]

Given aluminum’s remarkable qualities noted above, alumina is the most used of all base metals, which usage is expected to continue rising exponentially, as noted below. 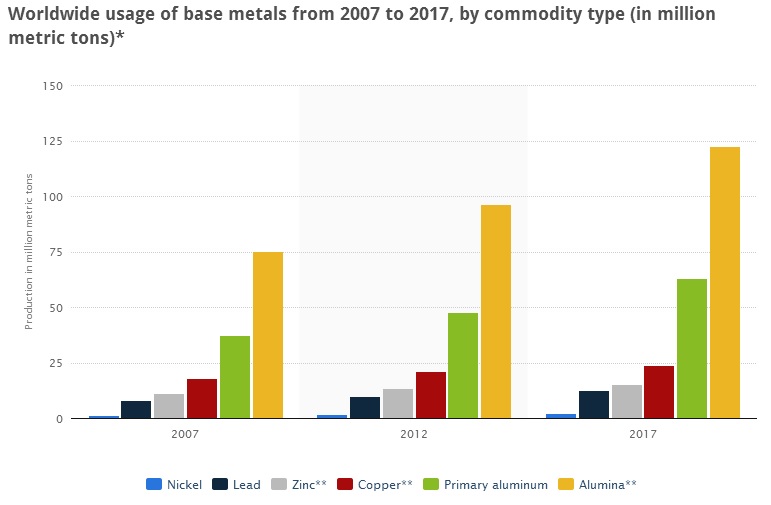 Among U.S. mining companies, Alcoa generates the most revenue according to Statista, reaching $22.64 billion over the trailing 12 months, representing more than 120% of its $18.74 billion market cap.

While the company reported an EBITDA of $2.72 billion, or 12% of its revenues, it actually ended up taking $2.36 billion away from common stock due to a non-recurring writedown of $2.1 billion in Q4 of 2013. The mining industry as a whole has been writing-off much of its loosing operations over recent years given the sharp declines in metals prices.

But after posting a small net loss of $178 million in Q1 of this year, Alcoa reported net income of $138 million in Q2. The company beat earnings expectations in three of the last four quarters, the sole exception being Q4 of last year due to that enormous write down. Analysts have recently increased future estimates as follows:

And the company’s growth rate is expected to be spectacular:

For some reason, analysts expect the industry to grow 151.70% in 2015, in which case Alcoa would underperform. But for the remained of this year at least, Alcoa seems poised to beat the rest of its peers, prompting three upgrades since April by Deutsche Bank (from sell to hold), RBC Capital (from underperform to sector perform), and most recently in June by BMO Capital (from market perform to outperform). Analysts’ high target of $24.50 is some 53% above the stock’s current $15.90 range.