Why the Phone Doesn't Ring in Quincy Anymore

Last week, Cheryl Percy — a professional photographer in Quincy, Massachusetts — was puzzled as to why no customers were calling in.

As per WBZ-TV's Beth Germano, Quincy claimed she "didn't have any idea why the phone wasn't ringing. What's happening here?"

Turns out some morons had risked death by electrocution in order to steal some 500lbs of copper phone wire right off the poles outside Percy's shop. 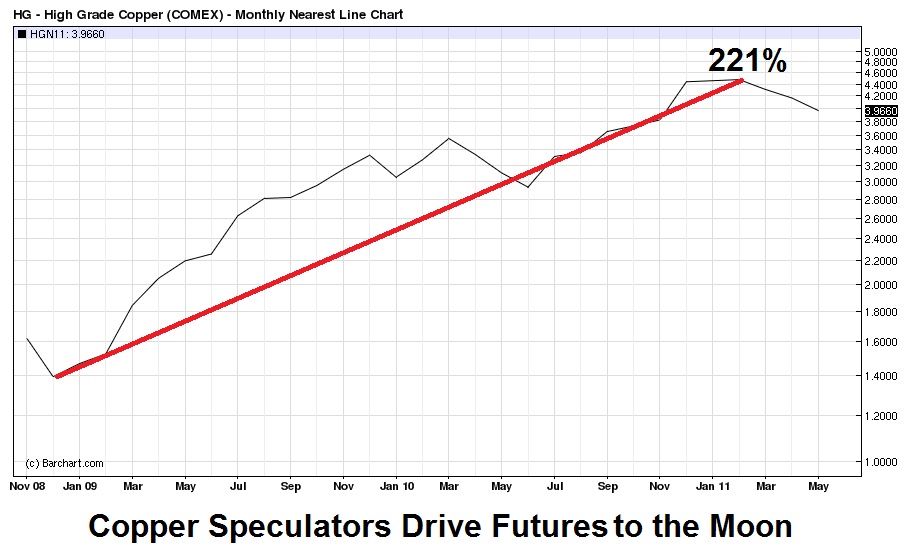 If they can manage stay out of jail — and off the coroner's slab — these copper bandits stand to make some $1,500 off their nightly raids.

Heck, if the miscreants can find some place to stash it for a couple of months, they stand to rake in hundreds more in ill-got gains, as growth in copper prices has averaged some 8.5% per month over the past two years.

But here's the oddest part...

Even though the price of copper is skyrocketing, nobody really wants to use the stuff.

According to the folks at the Commerce Department, U.S. home construction dumped off again last month, dropping 10.6% compared to the previous month and 23.9% compared to the same month last year. And keep in mind that last month wasn't so hot, and last year really stank!

Meanwhile Japan's nuclear tsunami is being blamed for taking a chunk out of U.S. manufacturing, with Stateside factories using only 74.4% of their potential capacity, down from 77.0% in March.

So if all that copper isn't going into car starters or washing machines or houses, then how on earth did the price get jacked up so high?

The answer is to be found on the right side of that copper chart (above), where they mark off that outrageous climb in U.S. dollars.

Anyone who has gone shopping for food or gassed up the car so as to drive to work, or stopped by the emergency room, or — God forbid — paid for next year of the kid's college tuition knows damn well that we are in one heck of an inflationary spiral.

Yeah that's right: this column is about inflation, which most folks find to be about as thrilling as last week's TV guide.

But if you know what's good for you, you will read this column from start to finish, because your behind is seriously on the line right now, because Washington is looking to steal some 30%, 40%, maybe even half of all the cash you have in the bank.

I'm not talking about taxes here, at least not the kind you can see coming; I'm trying to warn you about "stealth taxes," wherein those pirates in Washington secretly pay off their debts by cutting in half the value of each and every dollar you have somehow managed to stash away.

No Gold For You!

Here's how the game works...

Once upon a time, before King Richard of Nixon abandoned the gold standard, the value of each and every dollar in circulation was measured against how much of the shiny stuff we had stashed away in Fort Know et al.

After Tricky Dick walked away from the Bretton Woods accords, we began to weigh the value of currency in circulation against national GDP. And boy, are we ever paying the price for this con.

Currently GDP is stuck in a muddy rut. Just last week, we were told that previous 2011 growth estimates of 3.3% were just a tad too optimistic, and now maybe we should expect 2.8%. Personally, I suspect that even this is way too optimistic.

Heck, even little Timmy Geithner thinks that we could easily backslide into another recession if we are not careful.

Problem is, Washington has been creating money out of thin air like some kind of demented birthday party magician.

Forget about the national mint for a second. They're pikers when it comes to fresh new dollar bills. 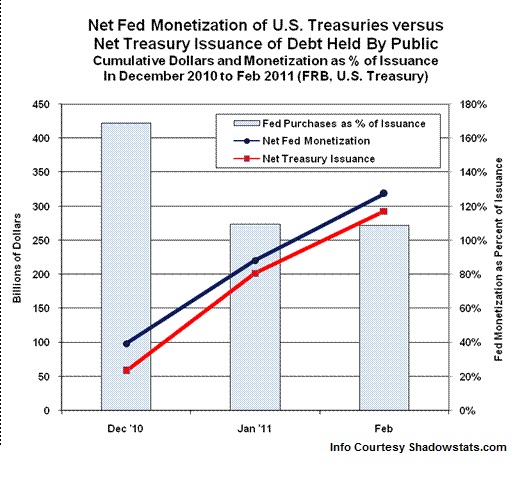 Even the billions that the White House dreamed up under the "TARP" program don't compare...

The grand champion money mill of all time has to be the Federal Reserve's Quantitative Easing programs, wherein these guys have bought several trillion worth of U.S. Treasury bonds off the open market — in essence, paying off the government's debts — by writing checks with absolutely nothing backing them up.

When grilled by Congress on this, Fed Chairman Ben Bernanke confessed that he and his gang were simply inventing this new money out of thin air.

Pure Tinkerbell magic economics here: "If you believe it's money, then it works."

There's only one catch: If the economy doesn't start growing like mad to soak up all this extra cash, then the new law of reality post-Bretton Woods says that each and every new dollar you made is suddenly worth less.

And so is each and every dollar that already existed.

Before, maybe you had enough money to buy a new car, put the kids through college, or maybe even retire. Afterwards? Fuhgeddaboudit! Maybe you have the same number of dollars, but now each one is worth SQUAT. (That's a technical term, really!)

You've probably seen ticker printouts like this flying about the place for months now: 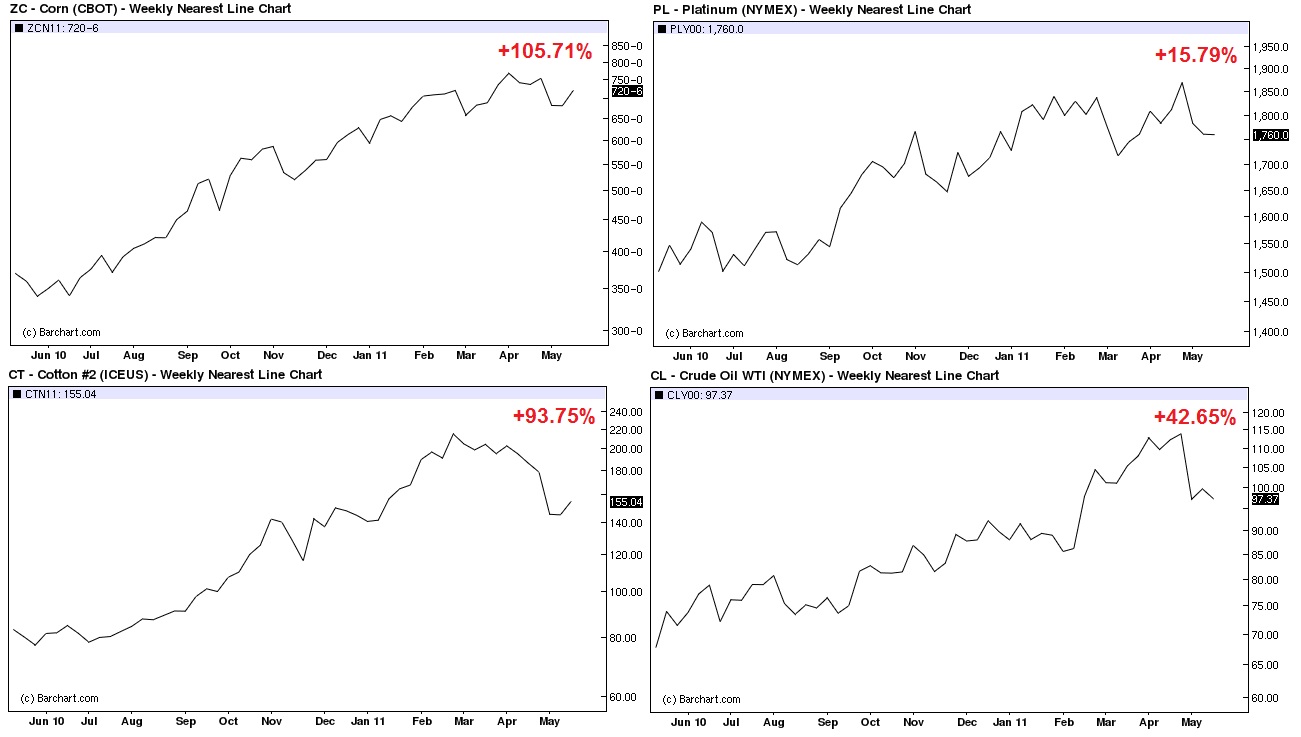 But let's frame this whole story another way. Last year, the dollar in your wallet could buy maybe half a gallon of gasoline. Now it buys a quart. And by next year, that will be down to a measly pint.

Brass tax is: NONE of this stuff is going up in value.

Instead, your dollars are being deliberately shrunk so that Washington can pay its bills! 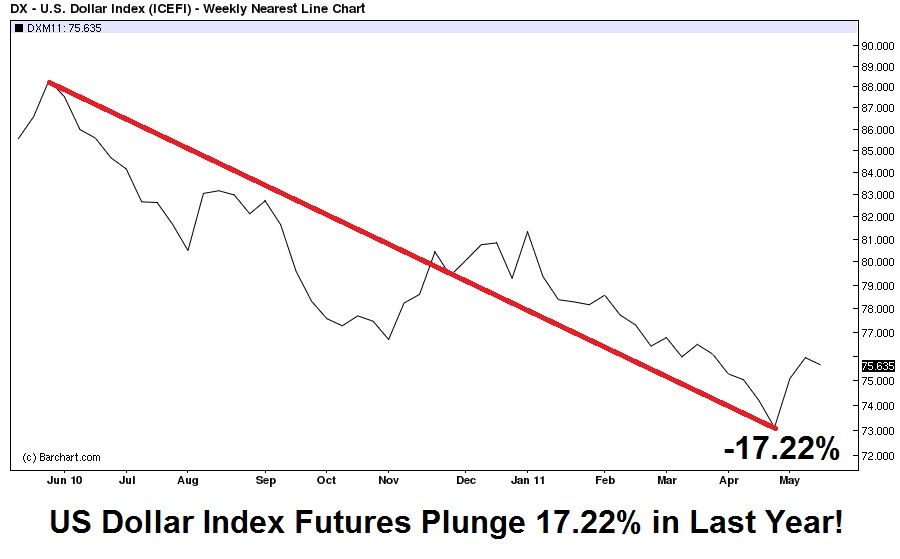 18 months 'til You Are Cut in Half

At this rate, your savings will be cut in half in another 18 months or so. Also your paycheck. Not mention any stock market gains or dividend checks...

"Inflation" is not some academic argument anymore. It's not some kind of stupid political ping pong game wherein each party tries to score arcane debating points.

As it stands now, by Thanksgiving 2012, one half of every penny, nickel, and dime you own will be lining someone else's pocket — gone, just like the telephone lines out front of Cheryl Percy's storefront in Quincy.

And you wonder why I am ignoring the recent short-term hiccough in gold prices?