How Lithium Almost Killed Us

Several years ago, at our old office in the heart of Baltimore's Inner Harbor, the powers that be decided it was time to bring some fun to our day-to-day grind.

The solution was a motorized two-wheeled platform known as a hoverboard, similar to the kind pictured below. 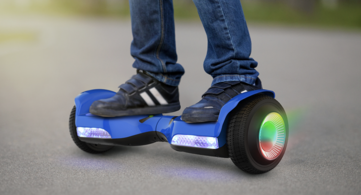 Though it didn't actually hover as its name suggested, it was intuitive in operation and very entertaining to use — even for some of the older employees who had trouble merely balancing themselves on their own two feet.

Everyone in the office eventually had their turn messing around on the machine, and when it wasn't being ridden around the sprawling, single-room workspace, it was sitting by our CEO's desk, charging its lithium-ion power plant.

That is, until one fateful day...

The malfunction started with a loud, firecracker-type pop. Everyone stopped what they were doing and stood to get a better view of the source of the noise.

Within seconds, a sizzling, crackling noise began to issue from inside the device and smoke began to pour from the seams of its plastic casing.

It Could Have Been Deadly

Our CEO, risking burns and shrapnel wounds, lifted the self-destructing device and tossed it out onto the fire escape, where for the next five minutes, it popped, burned, and exploded, sending a column of smoke into the clear blue Baltimore sky.

What remained afterward was a scorched, destroyed shell, but thanks to the quick response, the fire did not spread and catastrophe was averted.

This story may sound dramatic, but it's one that's repeated, on scales both smaller and larger, every single day, across the world.

The culprit is always a defective lithium-ion battery.

You don't hear about it too often, unless the ensuing fire destroys something big — like a $90,000 Tesla, which has gained somewhat of a notorious reputation for catching fire after running over an extra-tall speed bump, or a rock, or for no reason at all.

Such issues with lithium batteries have become somewhat of an accepted problem, the price of admission, if you will, to the era of electrically driven, rechargeable devices.

It's a common shortcoming, and it's far from the only one. Lithium batteries, while universal in the world of EVs and consumer tech, create almost as many crises as they solve, and poor manufacturing standards are only the tip of the iceberg.

Lithium is hard to mine, expensive and dirty to refine, slow to charge, and quick to degrade. Anybody who's ever owned a smartphone or laptop is already intimately aware of the latter issue.

What most people aren't aware of is that lithium is also one of the most troublesome industrial elements when it comes to acquisition.

China — or, more specifically, the Chinese Communist Party — has spent the last two decades quietly buying up lithium-rich properties across the world in anticipation of skyrocketing demand.

Their prophecies have proven all too accurate, and today the CCP owns the lion's share of the world's lithium exploration and production.

To make matters worse, the growth in demand is only now starting to enter the classic hockey-stick-shaped pattern.

EV production is set to explode in the coming decade, driven not just by trend, but also by legislation like California's recent commitment to ban fossil fuel-driven vehicles by the year 2035.

The Chinese are all but assured market dominance in this space as they leverage their ownership stakes in every stage of the lithium battery production chain.

Without an alternative, billions of consumers will become critically dependent on a highly unstable, dangerous, politically unfavorable element for more and more of their daily needs.

Wireless devices, medical implants, residential power storage systems, cars, trucks, and buses all need batteries... but where do we turn?

Right now, as you read this, a godsend of a solution is emerging.

A space-age nanomaterial known as graphene is being used by one Australian company to completely change the rechargeable battery game.

The next-gen batteries this company is already designing and building are longer-lasting and boast a much higher energy density, radically quicker charging (think 70 times faster than existing batteries), and, perhaps most important of all, a cheap, environmentally friendly, politically neutral production process.

On top of creating the world's most advanced batteries, this company has come up with a method for producing graphene that's effectively turned it into a viable industrial material.

Just imagine a Tesla that can go 1,000 miles on one charge, last for well over 1 million miles, and charge from nothing to full capacity in half the time it took you to read this article.

Oh, and not a penny of what you pay for the battery will wind up in the hands of Chinese industrialists or their communist handlers.

This company, which is still virtually unknown outside the scientific industrial community (despite being publicly traded), could change the face of the battery industry before the end of the decade.

It Could Be the Most Undervalued Tech Stock Trading Today

Today, you can own the stock at pennies on the dollar of its true value, considering that the sector it's disrupting rakes in more than $50 billion per year (the company's market cap is less than $250 million USD).

I've been following this company's progress, and writing about it, for more than a year now.

So far, my readers have traded it several times with great success as share prices fluctuated over the last 12 months.

Today, however, I've come to realize that this story is too important to remain a secret, which is why I'm writing to you about it here, in our flagship free newsletter.

There's so much more to know about the tech, the company, and the incredible batteries they are pushing into the market.

To get that information to you as efficiently as possible, I had my video production team put together a video on the topic.

It's free to view and free to share with your friends, and I urge you to do so as soon as possible.