How a Gold Bull Market Works

Make $2 Every Time Gold Goes up a Dollar

The biggest gold rush in world history has just begun.

It will be remembered as the most lucrative gold event ever.

But this gold rush will be different than any of its predecessors.

It won't take place on a remote desert plateau... or in a frontier mountain range. And you don't need to be a grizzled prospector to get in on the action, I promise you.

No, the biggest gold rush in history is about to take place on Wall Street.

And right now is the time to act because...

We Have Just Entered the Final and Most Profitable Stage of the Gold Bull Market.

During this stage, speculative mania buying will curve gold prices higher into a blistering parabolic spike.

Fortunately, a new investment vehicle is now available in the market...

...One that allows investors to retain the historic safety of gold and yield double the monthly profit.

Now before I get into this new gold vehicle, it's important to first understand why a rapid, near-vertical increase in gold prices is coming soon, and how...

You see, to get an idea of what to expect in the future, we always look to the past. 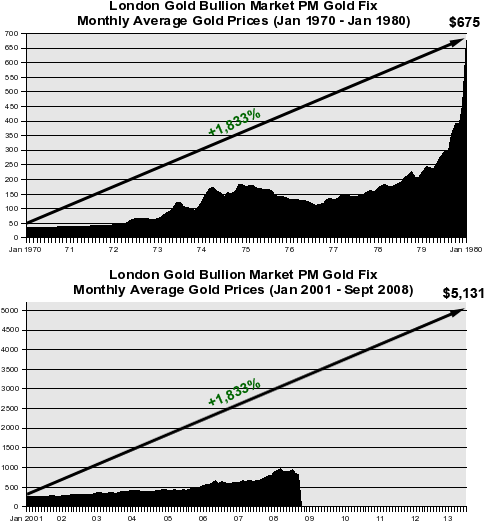 Now gold prices at $5,000 may seem like a stretch, especially considering the metal hasn't had much strength over $1,000. Nevertheless, $5,000 gold is absolutely possible. Here's why:

How a Gold Bull Market Works

During these three stages, gold prices typically rise in a parabolic upswing, which ultimately results in a sharp, skyrocketing price spike. (Take a look at the 1970s gold bull market chart above, as an example of this phenomenon.)

During the first stage of a gold bull market, prices increase because of currency devaluation. In this bull market a dramatic drop in the value of the US dollar against other world currencies has lifted gold prices over the past 7 years. This devaluation is evident in the 42% drop of the US Dollar Index between the summer of 2001 and spring 2008.

In the second stage, gold prices continue to grow due to increased investment demand. Attracted by the modest gains of the first stage of the gold bull market, investors begin to buy gold as an investment, which further snowballs the price of gold higher. And with the introduction of the popular gold ETFs—and similar products—investment demand has had incredible strength since the beginning of this gold bull market, growing in terms of both tonnage and dollar demand. 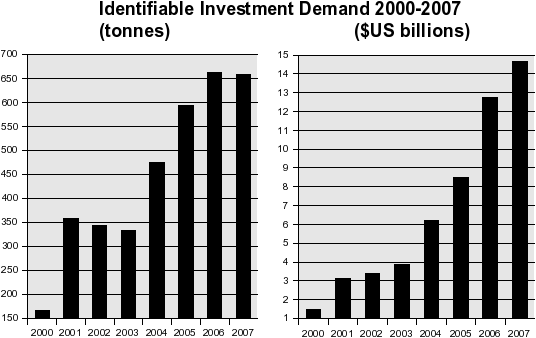 Again, the first and second stages of a gold bull market generally return considerable gains. In fact, gold prices in this bull market have increased as much as 306%.

But it's the third and final stage of a gold bull market that can turn everyday investors into instant millionaires.

There's no rush like a gold rush, and a speculative mania can kindle an inferno of popular greed that rivals that of the Conquistador's legendary lust for gold.

During the third stage of a bull market, mania buying finally turns gold's parabolic upswing into a blistering price spike.

We saw a similar price spike in the final six months of the 1970s gold bull market, when gold prices rocketed nearly 200%... leaving a trail of nouveau-riche investors in the wake.

Make no mistake. The mania stage is coming. Now let me tell you how you can...

Double Your Gold Profits with this New Investment

Earlier this year, one of the world's leading international investment managers launched a new, one-of-a-kind investment vehicle designed to double the monthly return of gold prices.

Mind you, this investment has been all but ignored by media since its launch. Gold, after all, has never been understood or appreciated by the mainstream, despite its historic economic significance.

Still, for every 1% increase in the price of gold, this new gold investment vehicle delivers a positive 2% return!

There's no investment club to join. You won't have to open a special account to get in on the action. It trades on the NYSE. Plus, it's completely liquid... and easy to add to any stock account you own right now.

Understand this editorial is not an endorsement for this investment vehicle, nor am I being remunerated in any way. That said, I can't reinforce this notion enough... Now is time you want to be in gold!

Yes, gold prices have pulled back significantly since mid-July, as the US dollar found strength as a result of foreign buying.

And it's likely that the US dollar will continue to remain strong in the short-term, subsequently holding back the price of gold.

But it simply won't last long.

Sooner or later the US dollar will collapse. It's imminent.

And when it does, the mania buying stage could skyrocket gold prices to previously unthinkable levels...

How to Get Started Doubling Your Gold Profits

And for a brief time, I'm offering this report free.

All you have to do is take a risk-free $25 trial of my Mining Speculator advisory.

Mining Speculator isn't your normal investment advisory. It is, however, the definitive resource for investors seeking profits—and protection—in a gold and precious metals bull market with no end in sight. (For five years, the Mining Speculator returned an average of 212%.)

It's where investors burned by the financial crisis are now turning... as a safe-haven alternative to the agenda-guided mainstream financial media. Truth is, in our Mining Speculator portfolio, we disqualify 99.9% of the gold, mining and precious metals plays out there. But when we're fully, 100% behind a company, you'll get the trade recommendation in a moment's notice. We tell you what to buy, when to sell, and when to hold... so you can enjoy the greatest gains possible.

For as little as $25, you can begin receiving my Mining Speculator advisory, in addition to getting a free copy of my new special report, "How To Double Your Gold Profits: The World's Only Investment Vehicle Yielding Double the Monthly Return of Gold Prices."