Gold is a hybrid metal that doubles as a store of wealth, so it moves in rather peculiar ways compared to other commodities. Its price is sensitive to multiple drivers, including jewellery demand, panicked flights to safety in times of crisis, and central bank policies as they affect the U.S. dollar and other currencies.

Because it responds to so many variables, gold’s movement can be quite tricky to predict. After holding remarkably stable in the $1,300 per ounce area for two and a half months from mid-March to late May, gold suddenly plunged $60 in a week to a recently low of $1,240 beginning May 27th.

Then, after holding the $1,240 level for little more than a week, gold suddenly shot back up again, jumping $42 on June 19th alone, and some $80 overall back to the low $1,300s where it has been holding for a couple of weeks now.

What’s been causing gold’s gyrations as of late, first down then up? Is this the new range for gold over the short term? Or is there something on the horizon that could jolt it to a new level – whether higher or lower? 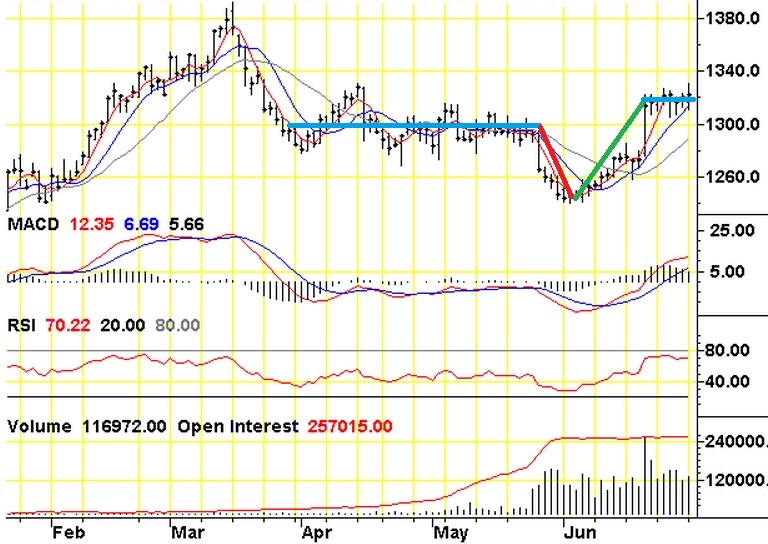 Let’s start with gold’s plunge in late May. A combination of strong economic data and lessening geopolitical concerns dealt gold a double-whammy of less fear in business and less trouble in politics.

“Stronger-than-expected economic data and a rise in consumer confidence sent the S&P 500 to new highs [on May 27th]. The durable goods report rose 0.8 percent, beating the expectation of a decrease of 0.7 percent. The S&P/Case-Schiller composite index of home prices in 20 metropolitan areas beat expectations by 0.2 percent. Consumer confidence rose to 83, which was in line with expectations,” APMEX completed the picture.

So when everything looks cheery from housing, to business activity, to politics, investors see less of a need for gold’s safe-haven protection. And thus the drop in price.

However, things can change very quickly in business and politics…

In early June came some indications that inflation was rising just a bit faster than most economists – and the U.S. Federal Reserve – had expected. As you may know, gold’s loves inflation, and just the whiff of it can be enough to send gold through the roof.

Why? Because inflation weakens currencies. And as the U.S. dollar weakens, the cost of commodities rise, since it takes more dollars to buy them.

While the rise in inflation started gold rebounding upward off its recent low of $1,240 at the start of June, it was the U.S. Federal Reserve’s reaction to inflation that propelled gold higher by $42 on June 19th, the day after the FOMC’s two-day meeting of June 17-18.

[The gold futures open-outcry trading pit at COMEX closes at 1:30 pm, some 45 minutes before the FOMC’s press statement is released at 2:15. So any trades by gold traders in response to the FOMC’s statement – although taking place right away via electronic GLOBEX – get stamped with the next trading day’s date. This is why the $42 rise is dated June 19 when it really began after the FOMC press release the previous afternoon. Plus there was more follow-through trading the next day right from the open.]

So, what was up with the Fed’s FOMC statement that would send gold higher?

“The central bank played down recent higher inflation as ‘noise,’ while also suggesting that stock valuation was not outside historical norms,” answers KITCO News. “Overall it was a market-friendly outcome.”

Steve Scacalossi, director and head of global metals sales at Toronto Dominion Securities, added that the “steady as she goes” view from the Fed supports gold. “This is not because anything has changed at the Fed - it is because the market was positioned for a change. In gold and silver this meant the market was short and has been covering shorts,” Scacalossi revealed.

Yes, as happens so often in commodities, the bears were caught short gold in light of all the talk going around at the time that the Fed might actually start raising interest rates sooner rather than later. When they heard Fed Chairwoman Yellen say that the FOMC is not concerned over the occasional higher inflation reading, calling it just “noise”, all the shorts immediately scrambled to cover their positions, resulting in a flood of buy orders which sent gold higher.

As Bill Baruch senior market strategist at iiTrader.com summed it up: “Once gold prices chewed through those levels investors scrambled to cover their short positions. Investors and traders expected more certainty from (Fed Chair) Janet Yellen and they were disappointed, which helped gold.”

But there was more driving gold higher for two weeks even before Yellen took the markets by surprise… namely the political turmoil unfolding in Iraq as the ISIS revolutionary movement has literally confiscated a third of the country and is threatening to overtake oil installations.

“We suspect that gold should enjoy a degree of underlying support from geopolitical headlines, which still remain concerning and have the ability to seriously destabilize the markets, especially if they result in a further spike in oil prices,” Meir warns.

What’s Next For Gold?

So now that gold is right back where it started from four months ago before this latest roller-coaster ride, what’s next? Will it break out of its $1,300-1,320 resistance levels? Or will it fall back down to the lower band of the range to the low $1,200s?

“Traders and investors are bracing for an extra important trading week this week,” Forbes gives us a heads up:

• Tuesday [today] – China’s purchasing managers index (PMI) is due. A strong number would indicate economic recovery and higher demand for commodities, which should drive gold higher.

• Thursday – U.S. jobs report for June, which is always a market mover. A higher number of jobs created would indicate a strong recovery and could send gold lower as it would “imply” less stimulus from the Fed. Conversely, a low jobs number would be bullish for gold as it would “imply” low interest rates for longer. However, the Fed has already shown us that it isn’t easily swayed by “implications”. It wants low interest rates, and it is perfectly capable of ignoring data that do not support its objectives.

As for Iraq, ISIS and crude oil, these are still expected to be a potent driver for gold should tensions flare up again, although their influence on gold have diminished for now.

“The civil war in Iraq is still an issue for the market place, but it has at least temporarily moved off the front burner,” Forbes informs. “The oil fields in the south of Iraq have not seen their production levels curtailed by the civil war taking place in the north of Iraq. Don’t be surprised to see in the near future this matter move back into the spotlight of the market place and once again significantly impact some market prices.” … Including gold’s.