What Obama's Presidency Could Do for Gold Prices

Democrat Barack Hussein Obama II has been elected to become the forty-fourth President of the United States of America.

And some gold bugs couldn't be happier.

Because the biggest gold bull market in modern history peaked amid a political landscape that is now similar to today's.

The political balance of power in the United States has regularly tilted back-and-forth since the country was first founded 232 years ago. This state of constant change can not be said about gold prices.

Between 1792 and 1971, gold prices were set in the U.S. by the federal government at a fixed price. This fixed priced was changed only three times in the 179-year history of federal gold price fixing.

On August 15, 1971, Richard Nixon unilaterally canceled the Bretton Woods system and stopped the direct convertibility of the United States dollar to gold. As a result, the U.S. dollar was decoupled from gold, and gold prices could fluctuate like any other commodity.

So the data is very limited when comparing the performance of gold prices as they relate to the political affiliation of the President of the United States. However, there are some striking similarities between the performance of gold prices during the great gold bull market of the 1970s and today's gold bull market and how the Presidential political affiliation was and is tilted.

Take a look at the chart below. It shows the inflation-adjusted average annual price of gold as they relate to presidential political affiliations. 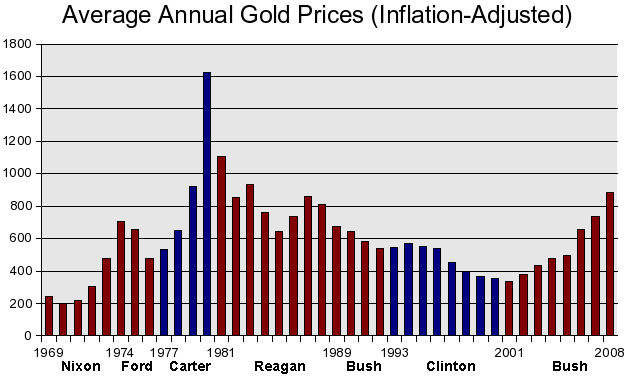 Republicans Richard Nixon and Gerald Ford controlled the US Presidential office during the first half of the great gold bull market of the 1970s. During this time gold prices increased a modest 217% as the value of the US dollar dropped and gold's investment appeal heightened under their administrations.

During the first half of today's gold bull market, Republican President George Bush has controlled the Oval Office. During this time gold prices have increased approximately 204% (to date) for the exact same reasons.

The similarities here are extraordinary to say the least.

During Carter's tenure as President, the great gold bull market of the 1970s peaked. Gold prices climbed as much as 526% in Carter's first three years in office.

So, with a new democratic President will today's gold bull market peak while Obama is in office?

Unfortunately, there's no surefire way to tell. But if prices were to increase as much as they did while Carter was in office, gold could almost reach a whopping $5,000 an ounce.