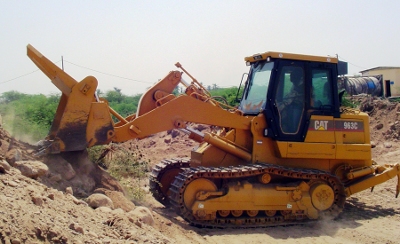 U.S. farming and construction machinery manufacturer Caterpillar Inc. (NYSE: CAT) will be sitting in the hot seat today before the Senate Permanent Subcommittee on Investigations to answer questions on its alleged tax evasion practices.

Evidence collected so far – much of which is circumstantial – looks rather incriminating. In a pre-hearing statement, the company welcomed the opportunity to participate in the hearing in order to “help the subcommittee understand Caterpillar's business.

Yet many feel they understand all too well Caterpillar’s business already – with its intricate web of alleged shell companies scattered around the world with the sole purpose of funnelling overseas profits (and some American profits) through tax-sheltering countries, ultimately reducing the tax bill when all those profits are brought back home.

It’s an all too common practice, especially among technology giants - from internet to pharmaceutical companies - whose business activities are based on intellectual property which is easily transferrable from one book to another.

That’s right, their shareholders are collecting money which rightfully belongs to you as an American citizen. It’s difficult to report on a problem without feeling the need to pitch in with a suggested solution. But hold on to your hats, because the solution presented here is going to upset many.

The Internal Revenue Service has issued notices to Caterpillar informing the company it owes the U.S. government more tax on “non-U.S. operations and foreign tax credits”.

In its pre-hearing statement, Caterpillar does acknowledge saving tax expenses, but that it has done so legally, inline with its mandate to maximize the company’s growth as any management team is hired to do. It’s their job to save the company money, and that includes seeking tax breaks wherever they are legally offered.

The company stresses that it is a responsible American corporation that honestly shoulders its tax burden: “We are a leading U.S. exporter and pay U.S. income tax on sales in the United States as well as on export sales,” the statement assured. “Caterpillar's effective tax rate averages about 29 percent, which is relatively high for a company with substantial earnings generated from business activities outside the United States.”

Given the 35 percent corporate tax rate, Caterpillar’s 29 percent paid – among the highest in the corporate world – should say something in support of the company’s sense of responsibility. Yet it isn’t so much the amount of the tax reduction, but the way in which it was reduced that disturbs officials.

Ex-employee Daniel Schlicksup - who was involved with Caterpillar’s tax reduction strategy - outlined in a 2009 lawsuit how the company used a “Swiss structure” to shift profits to offshore companies, and a “Bermuda structure” involving shell companies to return profits back to the U.S. without paying any tax in America. The alleged tax-savings scheme has saved the company some $2.4 billion in taxes since 1999, over $300 million in 2013 alone.

The method is simple. Sales contracts are made in the name of the company’s Switzerland-based subsidiary, which collects payments and pays the country’s ultra-low 4 percent corporate income tax rate. The Switzerland office then transfers the sales revenue to the company’s Bermuda office which pays a very small flat-tax fee that is not percentage based.

A similar structure is used by other giant corporations, such as Google which uses its Dublin, Ireland office to collect sales revenue originating in Europe, the Middle East and Africa. Profits are then passed to its offices in the Netherlands, and then on to Bermuda.

The Netherlands office charges expenses to Dublin, reducing the amount of tax paid in Ireland to just 1 percent of revenues, as reported in a 2010 exposé in Businessweek magazine. Next, Bermuda charges the Netherlands in similar fashion, reducing the tax paid there. Finally, the Bermuda office reports the bulk of the revenues, which are lightly taxed.

By the time Bermuda sends the net profits to America, Google ends up paying as little as 2.4 percent in total taxes, saving over $3.1 billion in taxes between 2007 and 2009 alone.

“It's remarkable that Google's effective rate is that low,” Martin A. Sullivan, a tax economist who formerly worked for the U.S. Treasury Dept, exclaimed. “This company operates throughout the world mostly in high-tax countries where the average corporate rate is well over 20 percent.” In similar fashion, Apple, Oracle, Microsoft and IBM “reported tax rates between 4.5 percent and 25.8 percent on their overseas earnings from 2007 to 2009”.

A 2013 Congressional Research Service report estimates revenue losses to the U.S. government at $30 billion to $90 billion each year due to corporate tax evasion. To put that in perspective, the federal budget deficit currently sits at $194 billion. If American corporations paid their full share of taxes, it would reduce the deficit by some 15 to 46 percent.

In total, there is currently $1.95 trillion in corporate earnings – yes, trillion – sitting in overseas offices just waiting for a convenient time to be repatriated back into the U.S. If those accumulated overseas corporate revenues were returned home at the regular 35 percent tax rate, the taxes collected would cover the entire federal deficit for 3.5 years.

Sign up for the free Wealth Daily e-letter below.

In each issue, you'll get our best investment research, designed to help you build a lifetime of wealth, minus the risk.


By signing up, you'll instantly receive our new report: North America Shale Dividend Guide.... Finding The Most Profitable Investing Opportunities For Your Portfolio.
We Protect Your Privacy

It’s easy enough to identify who is getting ripped-off by corporate tax evasion – you, and every other American citizen.

But who exactly is benefitting? Is it the executives? Partially, maybe because there is more profit left over to afford really nice executive salaries and compensation packages.

Ultimately, the extra profit saved from evading tax ends up in the company’s stock price, and therefore benefits shareholders the most. Now, the U.S. government isn’t going to start international incidents with the dozens of tax-sheltering countries around the world, most of whom are very small jurisdictions with very little wealth since they charge such little tax.

So perhaps it should recoup its lost tax revenues from the place where it all ends up – from the company’s stock. It’s a simple three-step procedure:

• The first step is to calculate how much tax a corporation has actually paid on its revenues. That’s easy enough to do simply by pouring over quarterly reports.

• The second step is to determine the “avoided tax” amount by subtracting the tax rate actually paid from the 35 percent national tax rate that should have been paid.

• The third step is to tax all dividends paid to shareholders with an extra “avoided tax” percentage calculated in step two, over-and-above the existing withholding tax of 20 percent.

But don’t jump out of your seat in an uproar just yet… I’m not finished. That same avoided tax percentage would also be charged on all stock sale proceeds as an added capital gains tax for the duration of the tax year.

Why should shareholders be penalized with extra taxes on their dividends and capital gains from stock profits? Because if the company had paid its fair share of taxes, shareholders would not have received so much in dividends, nor earned so much capital profit from a rising stock price.

Remember, the extra profit saved by avoiding taxes ends up raising the company’s stock value. That’s where the avoided tax ends up, and that’s from where it should be taken. Shareholders would be losing only the portion that didn’t rightfully belong to them in the first place.

All Water Returns to the Ocean

Perhaps the easiest solution is to simply lower the corporate tax. That would speed up the repatriation of foreign profits in very sort order.

Sure, the government would be entitled to less. But it would empower a company to spend more on new factories, hire more workers and expand. The same sum of money will always filter back into the economy one way or the other.

With higher taxes and tighter collection controls, the money taxed by the government would be used to fund programs and in some cases even be given back to companies through stimulus. With lower taxes, the money saved by corporations would make its way into the economy as they hire more workers and expand their operations.

Either way, the money always ends up being spent in the economy, regardless of which route it takes – whether it is collect and spent by government, or saved and spent by the corporations themselves.

End of the Bull Market in Sight?
A combination of symptoms are slowly lining up to suggest our long bull run is cooling down.
Guns for Bitcoin
Sophisticated "smart rifles" can be purchased with cryptocurrency Bitcoin.
Is Argentina Back After its Great Depression?
Credit institutions are reportedly coming back to Argentina after more than a decade of economic depression.
Buffett's Envy: 50% Annual Returns, Guaranteed
Warren Buffett once told investors at an annual shareholder meeting, "...it's a huge structural advantage not to have a lot of money. I think I could make you 50% a year on $1 million. No, I know I could. I guarantee that."