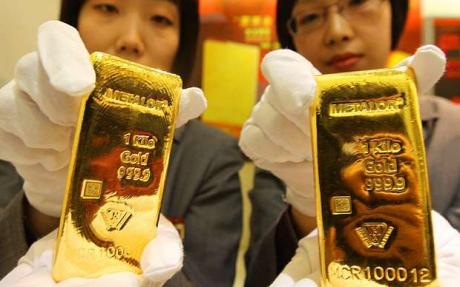 Last week, Bloomberg reported on the drop in the gold price and estimated that it has cost Russia and China $5.4 billion. This is based on the estimated holdings of the two countries’ central banks.

For China, this pales in comparison to the several trillions of dollars that have evaporated from the peak of its stock market bubble. Still, it seems that everything in China is going down these days. Its massive holdings of U.S. government debt hasn’t seemed so bad lately.

Last year, when oil prices plunged, there was widespread discussion about which countries it hurt the most. It definitely hurt the Russians. It particularly hurt the shale oil fields in the U.S. and elsewhere, but helped consumers.

There was much speculation that Saudi Arabia was purposely driving the price down in order to hurt other countries, or perhaps to bankrupt oil projects elsewhere in anticipation that it would eventually lead to much higher prices. If this was a plan, it was a pretty bad plan, as Saudi Arabia has been hurt quite a bit by the lower oil revenues.

Now with gold prices going down, there is talk about which countries are being hurt the most.

The U.S. central bank (the Fed) holds by far the most gold out of anyone, if we are being told the truth. If this is the case, then the Fed has also lost the most value, but few people talk about that. It is because it represents a small portion of the total U.S. economy and the Fed isn’t going to do anything with its gold that hasn’t already been done.

The oil analogy from last year doesn’t really compare to the current downturn in gold. We can’t say that China is suffering like Saudi Arabia because there is a major difference between their respective resources. Saudi Arabia sells its oil and depends on the revenue. China holds gold and looks at it as an investment.

China has a lot of problems going for it, including a massive real estate bubble and stock bubble. But the gold holdings of the Chinese central bank are not a problem, even with declining gold prices. This has virtually no impact on the economy.

If you own a lot of gold, then obviously the drop in price can be painful to watch. At the same time though, it wouldn’t be accurate to say that falling gold prices are bad for gold investors. It depends on your perspective.

I remember when the housing bubble popped after 2006 in the United States. Most people I talked to went on about how horrible it was. And it really was horrible, if you owned a house.

But a few people I talked to actually showed a little excitement. They did not want to show that excitement around their friends who owned houses, but inside there was some relief. The reason is because they could now afford to buy a house, assuming they kept their job.

The middle class was being priced out of the housing market. This was a sign that the housing market was not sustainable. But some people just simply could not afford to buy a decent house. After housing prices tanked, this changed. It was actually good for people looking to buy.

And that brings us back to gold. If you have put all of your life savings into gold, then the last 4 years have not been kind to you. But if you have 10% of your portfolio in gold and gold-related investments, and you want to expand it to 20%, then you may view the downturn in the gold price as positive.

The Chinese central bank holds trillions of dollars in foreign government debt. Now it has to deal with a collapsing stock market and a real estate bubble that is likely at the end. Gold should actually look pretty good right now.

And the drop in price just gives the Chinese central bank an opportunity to buy more at a decent price. I highly doubt the Chinese government was planning to sell its gold any time soon. If anything, it should dump some of its U.S. debt while the interest rates are still low.

The drop in the gold price is likely a positive development for the Chinese people too. I know it is for many Indians, who love their gold. The problem in China is that it is now a recessionary environment. People seek liquidity. There may be some people who would like to buy gold, but lack the cash to do so at this time.

Either way, I think this gold market is going to find buyers. If anything, central banks will likely buy at these levels.

China’s central bank recently reported it had increased its gold holdings to 1,658 tons. This was its first update since 2009, and it showed an almost 60 percent increase over this period. Some analysts expected the number to be even higher. With the current drop in prices, it should not surprise us if the People’s Bank of China is significantly increasing this number even more now.