Wednesday was a good day for Fed skeptics.

That's right. The Chairman charged with "oversight" of the Fed's monetary policy doesn't believe the Fed should exist at all (or the entire fractional-reserve system, for that matter).

Paul's latest book was titled End the Fed, after all.

To have a good chance at success in today's markets, you need to know what the Fed is up to. What their likely next move is, and how to interpret the latest spin.

Stocks, precious metals, food, bonds. These are liquidity-driven markets, and the Fed is injecting more juice into punch into the bowl than we've ever seen before. They're no longer the buyer of last resort. In some cases, they are the market.

The massive and unprecedented monetary easing programs underway affect literally every market in the world.

So I ventured to Capitol Hill to witness this historic, largely ignored event.

Seeing Austrian economists sitting on a panel, at a Fed hearing, was worth the trip alone. 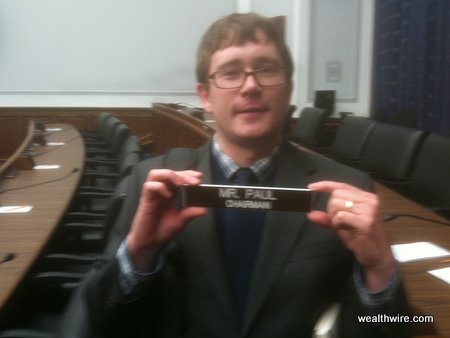 Right before security shooed us away. Says "Mr. Paul, Chairman".

Three PhD economists sat on the expert panel: two from the Austrian, or libertarian, school and one neo-Keynesian (think: Paul Krugman).

The two Austrian panel members, Dr. Richard Vedder and Dr. Thomas DiLorenzo, are both involved with the Mises Institute, an Austrian Economic organization.

I liked Dr. Vedder's comment on how interest rates are actually prices too, and any good economist will admit price controls don't work.  Keynes versus Hayek. Spend versus save. Print versus cut.

I'd say each member of the panel had their moments, and did a good job presenting their case.

I happen to agree with DiLorenzo and Vedder, but the more traditionally-slanted Dr. Bivens did a solid job for his side.  I like that Paul to picked an intelligent representative to present the opposing case. He's a fair-minded guy.

Daniel Gross and Aaron Task of Tech Ticker did a nice interview/write-up with Rep. Paul after the hearing. It's the only decent mainstream coverage I've seen.

Mr. Paul and the Austrians made a strong case that Fed easing doesn't really create jobs. It may create temporary jobs, while the money is flowing. But it  distorts the entire economy, punishes savers, and creates uncertainty — all of which fuels long-term unemployment.

In essence, Austrians believe the Fed's medicine actually makes the illness worse. As Rep. Paul noted in his introduction, $4 trillion (one estimate of total bailout costs) is an expensive price to pay for stubborn unemployment and inflation. Moral hazard also allows bad businesses to exist longer than they naturally should. This slows down the transformation of the economy.

There's also the fact that they can't keep rates low forever. Bond vigilantes will get restless, as inflation creeps in.

After the hearing, I'm more convinced than ever of the bankers' determination to print money. Media still largely dismisses Paul and the Austrians as economic quacks, unfortunately.

Bankers are dug in for a long fight. And the Federal Reserve's current path leads straight to QE10.

Unless something changes, hyperinflation is not out of the question... 10% annual, real inflation? I bet the board of governors would be just fine with that, unofficially.

We'll stop printing when things get better. Oh, look, we stopped and things slowed down a bit. People are saving money. Quick, print!

The Fed and its allies are still calling the shots. But the grassroots resistance, led by Ron Paul, is growing. There was a respectable showing of support at the hearing Wedensday, around 40 people I'd guess — mostly young locals from groups like Campaign for Liberty.

While it's good to see the 18-25 crowd getting involved, from an investing perspective, it's important to realize that the Fed is still winning. As long as they are printing, precious metals and other commodities will likely keep going higher.

The equity run seems extended here, but I don't expect stocks to drop much with Brian Sack and the NY Fed injecting so much liquidity, at least three days a week, via POMOs...

I plan to reconsider (and reallocate) when it starts to look like the Fed is accepting defeat, which is only a matter of time.

Nonetheless, it could be a ways off. And by that time, Americans may have all become unwilling millionaires. A burger combo might run $500, but at least we'll all be fabulously wealthy...

For hyperbole's sake, I will conclude with a citizen's account of hyperinflation during the 1920s in Weimar Germany:

It was horrible. Horrible! Like lightning it struck. No one was prepared. The shelves in the grocery stores were empty. You could buy nothing with your paper money.

— from Ralph Foster's Fiat Paper Currency: The History and Evolution of Our Money,
via Shadowstats.com

And a few images  I found while writing today's piece: 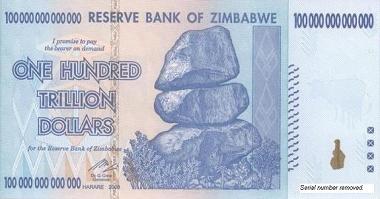 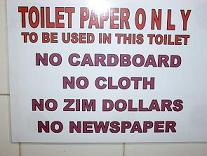 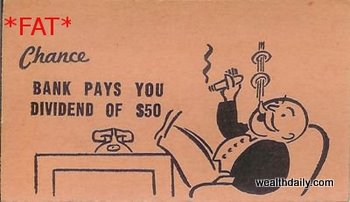