It's Time to Buy the Energy Fear

It's always about this time — when world indices start swinging by hundreds of points — that the word contrarian enters the investment diction.

Of course, MSNBC and its peers giving contrarian advice offers a pretty good definition of irony. Following their advice won't do a bit of good if you're trying to separate yourself from the herd...

But as recent headlines and pundit banter have left me unable to avoid the topic, my curiosity grew.

It may seem obvious enough, but I Googled it just to get the accepted definition.

Millions of Wikipedia users have given consent to the following:

In finance, a contrarian is one who attempts to profit by investing in a manner that differs from the conventional wisdom, when the consensus opinion appears to be wrong.

A contrarian believes that certain crowd behavior among investors can lead to exploitable mispricings in securities markets. For example, widespread pessimism about a stock can drive a price so low that it overstates the company's risks, and understates its prospects for returning to profitability. selling them after the company recovers, can lead to above-average gains.

Now let's take a step back, and dissect it from a bird's-eye view.

Consensus Opinion Appears to be Wrong

Here's consensus opinion on the value of public companies operating in the cleantech sector: 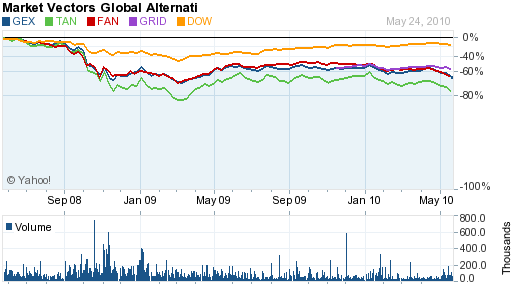 The market thinks those funds are worth 60% to 80% less than they were two years ago. Even the Dow (^DJI) — the beaten down, battered Dow — did much better during that time.

Here's why that consensus is wrong...

First, the growth rate of past, present, and future global solar installations:

Second, the growth rate of past, present, and future global wind installations:

The solar industry is still in its infancy, with only 15,000 MW installed. There'll be more than 750,000 MW in a decade. Scale hasn't even been reached. Companies are still maturing. Venture capital is still being spent.

What's more, these charts show nothing of the coming growth in the geothermal, smart grid, water, green building, and other related industries.

To paraphrase Buffett, the best time to invest in a stock is when shortsightedness of the market has beaten down the price.

The long view looks pretty sweet. And I'd say the consensus opinion appears to be wrong.

You've already seen this in the ETF chart above.

When weighed against present and future installs for solar and wind alone, the value scale seems to be severely miscalibrated.

And when you're well-acquainted with the stocks in the industry, it's easy to exploit that discrepancy in value. Have another look: 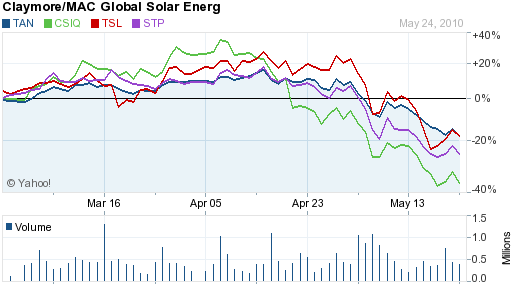 The solar ETF is down 20% in the past three months. But industry leaders like Trina Solar (NYSE: TSL), Suntech Power (NYSE: STP), and Canadian Solar (NASDAQ: CSIQ) are down even more — nearly 40% in some cases.

Being able to recognize and buy those kinds of unjustified dips is how my readers make serious money in the market.

It's what Buffett calls "buying fear," and it almost always leads to...

It's how the Alternative Energy Trader can guarantee — and never miss — delivering 20 double-digit gains or more each and every year. We already have 3 for more than 100% this year.

It's how the Alternative Energy Speculator made it though 2008 without closing a single loser, closed 50 winners in 2009, and is well ahead of the Dow in 2010.

At the end of the day, there's really no such thing as contrarian; the term simply means buying low and selling high, which is what every investor is after.

It's just that, when everyone else seems to be losing their minds or their money, we needed a name for the people that could constantly make winning trades.

Keep an eye out for situations like the one I highlighted in the solar industry. They'll be profitable every time.