Are Gold Prices in for a Rough Ride?

Investors in any market are continually faced with a major decision: follow the crowd or buck the trend. Following the crowd makes you late to the party, while bucking might have you sitting there for ages before the crowd ever arrives.

So what’s the case with gold, then? What has the crowd been doing lately? Should we buck the prevailing trend and buy at these low prices in the hope of getting the best seat in the house before the crowd arrives? What if the crowd never arrives? Do gold’s fundamentals make the move sound? 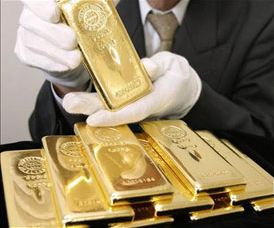 The Crowd is Bearish on Gold

Already down some 26% this year and heading for its first losing year since the bull run began in 2001, gold is no longer the life of the party. Over the past couple of weeks, short futures contracts on gold increased by 37%, long positions fell 4.9%, and the combined open positions of futures and options shrank by 13%.

Investments in professionally managed precious metals funds also dropped, from $137 billion in August to $130 billion in September in line with gold’s recent retracement at the end of the mid-summer rally.

Gold has given back more than half of that $225 rally and has recently touched the critical $1,250 to $1,275 support area for the third time since July. This is a major support level, as it served as the high from late 2009 to late 2010. It’s a classic case of a prior ceiling of resistance becoming the current floor of support.

If gold breaks below this level, the metal could be in for a sharp tumble all the way down to its next level of support of $1,035 – which was the previous ceiling of resistance in 2008. Goldman Sachs (NYSE: GS) on October 18th called for just such a move, forecasting $1,050 by the end of 2014.

The pessimism over gold’s prospects has extended into the physical gold market as well. Projected gold purchases during this year’s Indian wedding season may drop to a mere 25% of last year’s season, as the government discourages imports and pushes for more recycling of jewelry already inside the country.

China too has seen slowing bullion imports in August and September, with Credit Suisse (NYSE: CS) last week noting that Chinese buying has already peaked for this year. Even in America, the sale of the U.S. Mint’s most popular gold coin, the American Eagle, has fallen in October to just 23% of its April sales volume.

U.S. Bank Wealth Management consultant Dan Heckman noted the pessimism to Bloomberg. “The U.S. economy is showing ample signs that it is growing, and that means the Fed will start looking at tapering either end of this year or early next,” he explained, referencing the Federal Reserve’s plans to reduce its monthly purchases of $85 billion worth of Treasuries and mortgage-backed securities. Since reducing stimulus strengthens the USD, gold, which is priced in USD, can now be purchased for less, and its price thus falls.

Compounding the problem for the gold price is the stellar rise in the equity market, as investors see better opportunities in stocks. That’s where the crowd is at the moment – in equities. With interest rates expected to remain low even after the Federal Reserve terminates its monthly buying program, the equity party looks set to continue for another year or two at the least.

A Step Ahead of the Crowd

Yet the very conditions that are lifting equities now could be getting ready to lift gold in the future: low interest rates.

While reductions to the Fed’s monthly purchasing program are expected to strengthen the U.S. dollar a little further over the short term, driving gold down in the process, the continued ultra-low benchmark interest rate will resume pressuring the USD back down over the longer term. Low interest lessens the appeal of money as it slows its appreciation to the point where it can’t keep up with inflation.

Currency devaluation is spreading to other parts of the globe as well – self-inflicted in some countries, such as in Japan and in Europe, where central banks are forcing their money down by lowering interest rates to stimulate growth; while imposed from the outside in other countries, such as Turkey, India, Brazil, Russia, and other developing nations who are having their currencies weakened as global trade flounders.

Even gold bears such as Steve Cortes, founder of Veracruz TJM, will agree that this should make a strong case for gold. “If you look fundamentally, the world supposedly couldn't be any better for gold,” Cortes acknowledges to Yahoo! Finance. “You've got world central banks competing to ease more than the other, with the ECB being the most recent to join the party with the BOJ from Japan and, of course, the Fed here [in the U.S.]. You’ve had the dollar very weak over the last few months. That should be a recipe for gold to soar. And, yet, it isn't. It continues to trade lower. I do not like gold at all here as an investment or as a trade,” he derides the strategy.

And it’s all because of inflation, or the lack of it. Gold supporters have long cited inflation risk as one of their primary consequences of all this central bank stimulus. But with the U.S. Consumer Price Index rising just 1.2% over the past 12 months, the crowd is simply not convinced; there just isn’t enough inflation to bring them back into gold.

“There is no serious inflationary pressure in this economy and that's because wages are simply too restrained,” Cortes continues to Yahoo! Finance. “You need growing wages to really get inflation going. That's what we had way back in the 1970s. You have the opposite now. So, for that reason, I think avoid or even short gold.”

Yet the shortfall of waiting for inflation to appear before jumping into gold is that by the time it arrives in all its undeniable fury, jumping into gold at that time would be like following the crowd to the party – late.

Gold bulls, including Euro Pacific Capital CEO Peter Schiff, have long been urging investors to position themselves in gold before it becomes popular again, while its unpopularity is holding prices down.

“I've been buying gold for a long time and I've been advising my clients – or anybody that listens to me – to buy on the dips,” he reaffirms to Yahoo! Finance. “Look at that article in the New York Times arguing for 6% inflation. That's money losing 6% of its value every year. We're trying to convince everybody that weakness is strength… that the only thing good is borrowing a bunch of money and spending it the way we do. That's what destroys a currency. You've got to have assets that the governments can't destroy and that's gold."

Schiff, like a true contrarian, advises beating the crowd to the party. “I also think that you've got a lot of shorts in the market now that are going to be very disappointed to have to cover those short positions at much, much higher prices than they are today,” he elaborates. “At some point, the bottom is going to drop out of the dollar and gold's going to skyrocket. If you don't own it, it's going to be too late.”

Gold’s Engines Are On

History has often shown, especially in gold’s case, that markets can react very quickly to evidence once it appears. Just because we don’t see that evidence yet does not imply it will not come.

Ever flown aboard a jet airliner? Recall the sensation when the pilot first pushes the throttle at full blast, your body pressed into the back of your seat by the engines’ tremendous force? Looking out the window at that moment gives little evidence of movement. Do you conclude, “The engines are on full blast and we’re still not off the ground. This plane is never taking off.”?

While Cortes and other gold bears acknowledge the fundamentals to lift gold higher are in place, they cite the lack of inflation as proof the metal has no wings. Schiff and other gold bulls urge investors to buckle up, because the engines propelling inflation forward are merely revving up.

The U.S. may have implemented its loose money policies ahead of everyone else, but the rest of the world has only just recently fired up its printing presses and pressed the throttle releasing volumes of cash into their economies’ engines. When these injections of stimulus fuel finally work their way into the global economy, inflation will take the world by storm. Gold may still be sitting at the end of the runway today. But it is only a matter of time before it takes off again, this time soaring higher than ever before.