It looks like the Three Amigos of North America (The U.S., Canada and Mexico) will be going on a long vacation together this summer. But they should be back to work in full force by the end of this year or early the next.

Both the Mexican central bank and the World Bank have lowered their economic outlook for Mexico, with the central bank reducing the nation’s 2014 GDP growth by 0.7%, from the 3-4% range to a slightly slower 2.3-3.3% range.

Yet after this temporary slump, the World Bank foresees Mexican GDP rising back up to the 3-4% range over the next few years “as the U.S. economy gains steam”. Mexico’s dependence on a strong U.S. economy is understandable, given that America is the largest importer of Mexican goods, buying up 78% of Mexico’s exports.

But the dependence flows the other way too, as the U.S. sells 14% of its exports worth some $216 billion to Mexico, America’s second largest export market behind the 18.9% of goods worth $293 billion sold to Canada.

With so much trade flowing across the U.S./Mexican border, any slowdown in Mexico’s economy will have an impact on America’s too.

Mexico is Taking a Little Siesta

This recent slowing of Mexico’s output began in early 2013, and is something of a mid-day breather at the end of three robust years of impressive economic growth - as noted in the graphs below of total GDP by year, and annualized GDP growth by quarter. 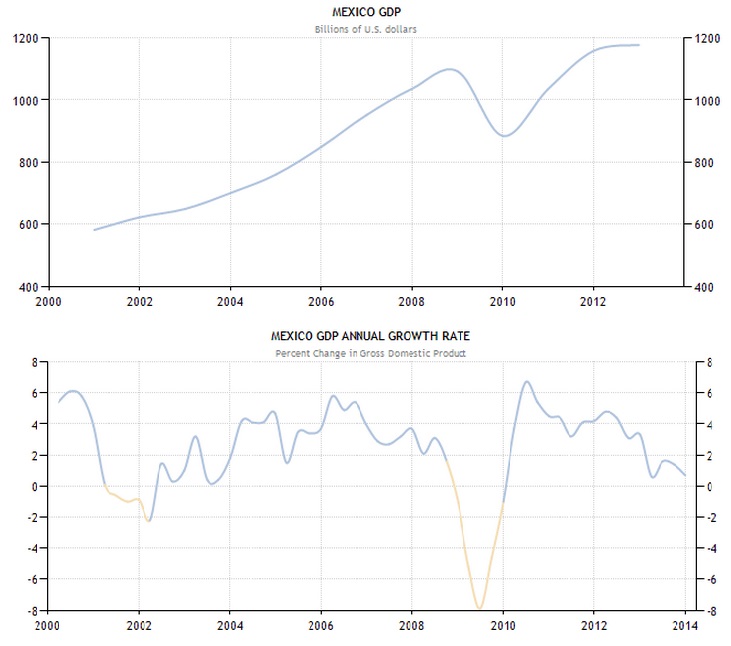 In the early stage of the global economic recovery from late-2009 to late-2012, Mexico’s GDP exploded upward on the back of a number of economic reforms “in the areas of labor market regulation, education, telecommunication and competition policy, financial sector regulation, energy, and fiscal policy”, the World Bank informs.

From 2010-12, Mexico’s GDP was growing at a rapid clip, averaging 4.3% annually over that time. But in early 2013, its growth rate fell below 2% where it has been ever since, averaging an annual growth rate of just 1.1% over the past six quarters. Hence, the flattening of GDP in the upper graph.

What caused the slowdown? “Deceleration in economic activity was driven by weaker export demand and a contraction in domestic investment, largely in construction,” answers the World Bank.

As noted below, in periods of economic slowdown, exports (black) always fall sooner than imports (blue), creating the ever dangerous trade deficit (brown). 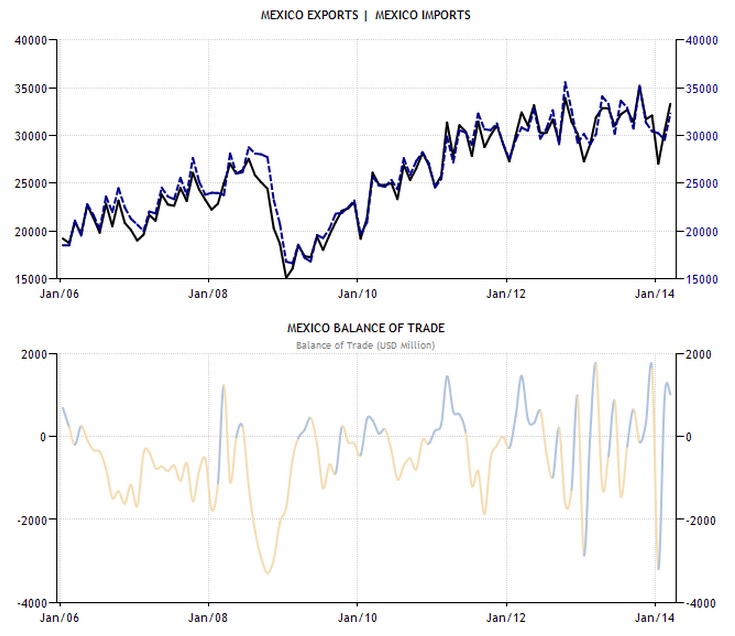 Help Is On The Way

But a little help may be coming soon to Mexico’s export industry as U.S. companies continue to open new plants and expand existing ones south of the border, especially automakers. Automobiles and auto parts comprise the nation’s largest export market, accounting for 24% of total exports, making Mexico the eighth largest producer of autos in the world.

General Motors announced last June it was preparing to invest some $691 million expanding its Mexican plants, a smart strategic move considering the growing demand for American cars throughout Central and South America, with Mexico being the gateway to it all.

“The automotive sector is today one of the pillars of the national economy, representing more than 20 percent of manufacturing GDP, and continues to be, for many reasons, a fundamental industry in attracting investments to productive sectors of the economy,” GM Mexico President Ernesto Hernandez proudly announced in June of 2013.

As the second largest automaker in Mexico, GM’s growing presence there will go a long way to helping the nation revitalize its exports. But Mexico’s top automaker, Nissan, has even bigger investment plans, committing itself to boosting its Mexican auto output from 700,000 vehicles annually to 1 million by 2016 – an increase of 43% over the next three years.

Who could ask for anything more? But let’s do so anyway…

For Mexico to fully ramp up its industrial productivity and improve its competitiveness, it has to modernize its way of doing business. There is no room for mid-20th century practices in the second decade of the 21st.

The banking system, for one, is slow and cumbersome, making international transactions tedious and painstaking. From banks to law firms to construction companies, uniformity, consistency, even professionalism are sorely lacking, which the World Bank calls “widespread informality”.

Another major sector crying out for reform is the energy industry. Oil and oil products are Mexico’s second largest export market behind autos, accounting for 14% of total exports.

During two of the most powerful bull markets to hit the oil industry in recent years, the price of crude oil blasted upward from $12 a barrel in 1998 to over $140 by 2008, and then again from $35 in 2009 to over $100 today. It is completely mind-boggling how Mexico squandered that opportunity by actually reducing its oil production 28% since 2004, as noted below.

But the current Mexican administration is keener, with a plan to “liberalize” its oil industry to opening it up more to foreign companies. The “liberalization of the energy sector is expected to boost Mexico’s economic growth performance, and has created enthusiasm in the investor community,” the World Bank commends the campaign.

This and other reforms have already earned Mexico an upgrade to its credit rating by Moody’s from Baa1 to A3 in February of this year, making it cheaper for Mexico to raise money through bond issuances. The strong credit rating allows the central bank to keep its interest rates low for longer, cutting its national interest rate to below 4% late last year for the first time since the central bank adopted an American-styled overnight lending rate system back in 2008.

A Work in Progress

After a very successful run out of the global recession of 2008 to a GDP peak in late 2012, Mexico has been taking a little rest to recalibrate its economy and prepare for a second wave of reforms. President Enrique Peña Nieto’s “administration will now focus on secondary legislation and in demonstrating implementation progress before the mid-term congressional elections in July 2015,” revealed the World Bank.

Such ongoing reforms, improving economic flexibility, and increasing openness with foreign companies have kept the Mexican economy and currency more stable than others during the turbulence of 2013.

That “exit from unprecedented monetary policies” – referring specifically to the U.S. central bank’s tapering of its bond purchases – created “heightened risk aversion” when U.S. and European institutions and investors started pulling their investments out of risky countries like India, Russia, Brazil and others, plunging their currencies, and increasing their bond yields and inflation.

Even as uncertainty continues to haunt economies the world over, both developed and developing, Mexico’s ideal location as the gateway between the U.S. and the rest of Latin America will keep its economy well grounded for decades to come.

As the World Bank acknowledged, “A gradual recovery of economic activity with more dynamic exports as the U.S. economy gains steam and normalization of public expenditures should bring [Mexico’s] economic growth back to a range of 3 to 4 percent over the next few years.”

This bodes well not only for Mexico, but also for the U.S. Once we get past this short-term summertime lull in economic activity across North America and around the world, Mexico will once again be on top of its game.

As the second largest buyer of American products and the third largest supplier to America, Mexico will likely be the developing economy of choice as it ramps up its production and consumption in coming years, and flings open America’s gateway to the Latin market.

How Wall Street Robs Americans
Wall Street is not your friend. Financial advisors, mutual fund managers, and hedge fund managers all exist for the same purpose: to line their pockets with a portion of your retirement savings.
Big Jewelry Merger Outlook (NYSE: SIG)(NYSE: ZLC)
Signet Jewelers Ltd. wants to acquire shopping mall jewelery maven Zale Corporation. Here's what the deal could mean for both companies.
The Risk of Cannabis Investing
Legalized marijuana is a veritable gold mine for supporting industries, but also a breeding ground for scams.
Buffett's Envy: 50% Annual Returns, Guaranteed
Warren Buffett once told investors at an annual shareholder meeting, "...it's a huge structural advantage not to have a lot of money. I think I could make you 50% a year on $1 million. No, I know I could. I guarantee that."