Where to Invest for the Next Bull Run

In preparation for our all-options launch, we're warming up in The Options Pit blog.

How's the beta testing going? You tell me.

...and we're just warming up for the all-options launch. Stay tuned for more.

Today's Gold World: Where to Invest for the Next Bull Run

In January 2008, solar companies were running amok on $96 oil. But if you took a closer look, you'd have seen that the industry was running out of power, and fast, unless they could build up polysilicon supply to keep up with demand.

Thanks to a desperate influx of spending along with the insane increase in demand, the polysilicon market was in the midst of a veritable feeding frenzy. Any company with polysilicon supply had a license to print money.

In 2008, oil rallied above $143 a barrel on supply and demand issues. Oil companies, including domestic oil producers, skyrocketed as a result.

Supply and demand issues even forced coal prices to historic highs this year, taking coal-related stocks along for the ride.

It's basic economics 101. Any company with supply in a market, where there's heavy demand and low supply, has a license to print money. The same thing is happening in the aluminum industry.

Aluminum Could Skyrocket to $4,000 a Ton 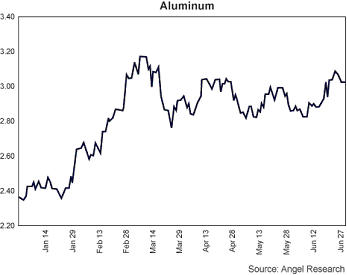 And it's mostly thanks to the structural boom in Chinese demand, which accounts for some 80% of global demand over the last three years. That growing demand, though, is being met with low supply.

Worse, according to UBS, the world aluminum market is heading for a 200,000-tonne deficit this year and in 2009, as coal supply becomes scarce and producers cut output. "We expect market fundamentals to continue to tighten as global restraints on energy supply grow and impinge on the aluminum industry," they said.

Aluminum supply is also struggling to keep pace with demand because producers don't have access to the electricity needed to create the metal. And as a result, historically high aluminum prices are expected to rise another 33% over the next two years.

What to Buy as Supply Remains Tight

Some of the companies on SC Trading Pit's radar screen of aluminum stocks include:

But the team is currently doing its due diligence on these aluminum-related stocks, including an under the radar stock that trades at only $7.90. Stay tuned. SC Trading Pit is looking to release the stock shortly.

In case you missed our other investment opportunity highlights, here's what we covered in Wealth Daily, Gold World, Energy and Capital, and your free blogs for the week of June 30, 2008.

BIS: Global Economy Near a "Tipping Point": The Unsustainable has Run its Course
According to a report released today by the Bank for International Settlements (BIS) the global economy has reached a "tipping point". The result says the group may be a far deeper crisis than is expected and a bout of deflation in the world's biggest economies.

Dear President Obama: Signed, William H. Gross, Ordinary Citizen
"You have inherited a mess. Your predecessor, fixated on emulating a former Republican icon from a far different economic era, chose to emphasize tax cuts for the rich and excessive consumption for all Americans."

Oil Speculators Are Not to Blame: But a "dearth" of new supplies are...
For weeks, oil speculators have been blamed for skyrocketing oil prices... but it's not their fault. It's a supply and demand issue.

Caution: High Risk Trade
Modifications suggest included further optimizing the social project in the area, mitigating the impact of open vein deposit in the affected areas of the Imataca, and improving the remediation plans at the end of the mine life as well as remediate the existing environmental damage caused by illegal miners.

The 2008 Oil Forecast
The stock was recently upgraded from "speculative buy" to "buy" with a $10 near-term price target on news that the company successfully drilled its Costayaco-4 well in the Costayaco discovery in southern Colombia.

Uranium Mining Stock: Buy and Hold American Uranium
In just two decades the world's demand for electricity is projected to nearly double! To meet this rising demand, the worldwide power sector will need to add an estimated 4,800 gigawatts of new electrical capacity to the global grid. To put that into perspective, a city the size of San Francisco requires about 1 gigawatt of electricity to function.

Investing in Algae Biofuel: The Only Biofuel that Can Take on Oil
When the price of oil rises just one dollar, the Pentagon's fuel expenses climb an astounding $130 million. So the $50 rise in oil prices over the past six months has taken over a half billion dollar toll on the U.S. government. And that's on your dime.

ANWR Drilling: Will ANWR Oil Production Come Too Late?
There's a new game being played in the media. From what I understand, the rules are easy. Simply pick somebody (other than yourself, of course) to blame for oil prices. Then, you can watch as the blame is bounced around. Unfortunately, there's no way to win the game since the blame goes back and forth repeatedly.

Jim Rogers on Oil and the US Dollar: What Jim Rogers Is Advising Now
Also not helping our oil woes, OPEC President Chakib Khelil is out predicting $170 a barrel before the end of 2008. According to Bloomberg, Khelil said, "Oil prices are expected to reach $170 as demand for fuel is growing in the U.S. during the summer period and the dollar continues to weaken against the euro.''