Karzai: "America should do something" 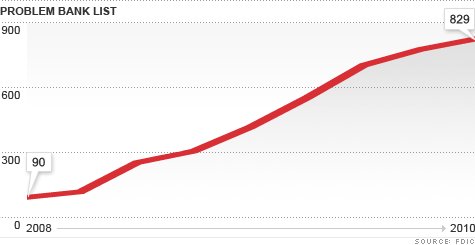 According to the FDIC, the government's list of problem banks is now at its highest level since 1993.

In all according to the most recent data, 829 banks are now at the risk of failure, up 53 from the 755 from the first quarter of this year.

That's on top of the 118 banks that have closed this year including the 45 closings during the most recent quarter.

That's troublesome since the FDIC fund set aside to potentially bailout these troubled institutions is itself already $15.2 billion in the red!

Instead, it's the prospect of bailing out the biggest bank in Afghanistan that has me so irked today that I can barely type out this rant.

After all, everyday I ask myself what exactly in the hell is going on over there. First it's our blood and now it's been suggested that we donate even more of our treasure.

Either way, I'm certain that this stone age paradise will never be worth any of it.

As for the story it is by Andrew Higgins and Ernesto Londono entitled: Karzai's brother calls for U.S. to shore up Kabul Bank as withdrawals accelerate

“As depositors thronged branches of Afghanistan's biggest bank, Mahmoud Karzai, the brother of the Afghan president and a major shareholder in beleaguered Kabul Bank called on Thursday for intervention by the United States to head off a financial meltdown.

"America should do something," said Karzai in a telephone interview, suggesting that the U.S. Treasury Department guarantee the funds of Kabul Bank's clients, who number about a million and have more than a billion dollars on deposits with the bank.

Kabul Bank handles salary payments for soldiers, police and teachers. It has scores of branches across Afghanistan and holds the accounts of key Afghan government agencies. The collapse of the bank would likely spread panic throughout the country's fledgling financial sector and wipe out nine years of effort by the United States to establish a sound Afghan banking system, seen as essential to the establishment of a functioning economy.

Action by the United States, said Mahmoud Karzai, would prevent a run on Kabul Bank and protect other banks, too. He said Kabul Bank is "stable and has money" but cannot withstand a stampede by panicked depositors.

"If the Treasury Department will guarantee that everyone will get their money, maybe that will work," said Karzai, who holds 7 percent of the bank's shares, making him the third-biggest shareholder.

Karzai, who spends most of his time in Dubai - where he lives in a waterfront villa paid for by Kabul Bank - rushed to Kabul on Wednesday to join efforts to salvage the bank.

Treasury officials have said they have confidence in Afghanistan's Central Bank, which ousted Kabul Bank's top officials earlier this week and has sought to stabilize the bank's finances.

But those moves may have spurred a panic: Depositors, said people familiar with the situation, yanked at least $90 million from Kabul Bank on Wednesday and the hemorrhaging of funds accelerated Thursday.

"Yesterday was not too bad, but today is worse," said a Kabul Bank insider. "It is a very bad situation."

This is absolute madness I tell you.

Art Cashin on the Market Crash