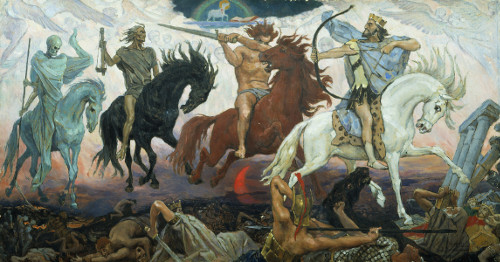 Friday, September 19th was a pivotal day on Wall Street as it marked the end of a boom and the beginning of a bust. At least four conditions all came together to turn the market on its head; let’s call them the four ghosts of the stock market apocalypse.

• First, the largest IPO in history was transacted that day in Alibaba’s $25 billion offering marking the culmination of two years of accelerating IPO activity. It seems everyone knew to go public before Alibaba did, since BABA’s debut would be so momentous it would be like the fat lady singing at the end of the opera, bringing the curtain down on the IPO hit-parade.

• Also on that day, all-time highs were touched by the S&P 500 and Dow Jones indices, while the NASDAQ hit its highest level since the crash of 2000.

• Still on the day, the Russell 2000 index of small caps succumbed to the dreaded “death cross”, where the 50-day moving average crosses below the 200-day moving average. Yet this particular death cross portended double trouble, since it happened to the small cap index which historically leads the rest of the market in a new direction.

• The fourth ghost of the current stock market apocalypse put in more of an omnipresent appearance, lingering about the markets since the late summer or so. His curse came in the form of slowing stock buybacks by corporations. For years, companies have been using excess cash to buy back their own shares, since there was no real need for capital investment given the slowing global economy. So they decided to park their money in their own stocks until the global economy showed real signs of recovery. After reaching a peak in Q3, buybacks suddenly slowed to a trickle last month. A major source of cash injection propping stocks up now removed, stocks had nothing holding them up anymore.

And so the four ghosts of the current stock market apocalypse now dance with delight as they see their hard work come to fruition, each lending a hand in brining this roaring bull market to its demise. From that fateful day of September 19th to yesterday’s close, the Dow Jones index has fallen 3.1%, the S&P 500 is down 3.75%, the NASDAQ has retreated 4.5%, and the Russell 2000 index of small caps has tumbled 7.1%.

Suddenly, the four troublesome tyrants of turmoil stop their merry dance on a beat, their attention caught by the glistening of shiny metallic plates in the distant haze, their ears alarmed by the stomping of galloping hooves. In an instant, four other ghostly souls clad in shining armor and mounted on majestic warhorses punch through the mist at full charge, with swords unsheathed pointing straight ahead, each gallant knight charging toward a phantom all his own.

Who are these honorable heroes riding into battle on investors’ behalf? Will they prevail against the forces of chaos wreaking havoc in our marketplaces? Will they strike with a vengeance forceful enough to liberate our houses of commerce from these meddling malevolent mercenaries of mayhem, and once again restore to us the prosperity we have come to know and love lo these many years?

The lead knight answers our query with a thundering battle cry: “That we shall do and more!”

Four Signs the Bull Market will be Saved

Indeed, there are some valiant souls riding into battle to rescue investors from the inferno that has been burning down our marketplaces these past three weeks. But when you see who they are, you’ll likely be just a little unimpressed. Who are they? The U.S. Federal Reserve and the European Central Bank, for starters.

I know, you can’t quite picture Janet Yellen and Mario Draghi mounted on warhorses charging into battle with drawn swords in hand. But that’s what they’re doing, in a way.

Here’s how the salvation of our stock markets will likely unfold over the course of the next few months. We are about to be visited by four signs encouraging us to start buying:

• ECB asset purchases will divert investments from Europe to the U.S.

Deutsche Bank strategist George Saravelos on Monday predicted that “the European Central Bank embarking on an aggressive round of asset purchases… will push down real yields [in European bonds] and create a domestic asset shortage,” reported the Wall Street Journal. “That will prompt European investors to go abroad in the hunt for yield.”

The first part of that sign has already taken place, with the Italian 10-Year bond yielding 2.34%, the Spanish 10-Year yielding 2.15%, and the German 10-Year yielding a measly 0.85% - all lower than the U.S. 10-Year’s 2.36%. As the ECB buys ever more bonds over the next few years in imitation of the U.S. Federal Reserve’s bond buying stimulus program, European bond prices will remain high and yields low, forcing European investors to invest elsewhere.

But here’s the clincher… Saravelos and his team at Deutsche Bank see record surpluses of savings in Europe with no attractive opportunities in which to invest. The “combination of high eurozone unemployment combined with a record current account surplus… reflect the same problem,” Saravelos identified: “too much savings relative to investment opportunities”.

Saravelos goes as far as to compare Europe today with China 10 years ago, when Chinese investors went on an investment spree around the world. “Europe is the new China,” he wrote to investors, “and via large demand for foreign assets, it will play a dominant role in driving global asset price trends for the remainder of this decade.”

U.S. markets are bound to be major beneficiaries of European investment for as long as the ECB uses the same playbook as the U.S. Federal Reserve in its buying of bonds, squeezing capital out of Europe toward America.

A second consequence of ECB loose monetary policy will be a fall in the Euro for years to come, as the European bank floods the continent with Euros through all that bond buying. A weaker Euro will in turn strengthen the U.S. dollar, increasing corporate America’s purchasing power and wealth.

While a stronger dollar may not be so great for exports, it will at least draw investors into U.S. dollar assets, including stocks, driving stock markets right back up again. It won’t matter if U.S. companies stop buying back their shares, for Europeans will be.

• The U.S. Fed will keep interest rates lower for longer.

A third consequence of the ECB’s bond buying program – after sinking the Euro lower and lifting the USD higher – is that a strong USD will once again reintroduce deflationary pressure on prices in America. An expensive dollar means consumers can buy more goods and services, cheapening prices. But the U.S. Fed has always stated it wants inflation, not deflation.

This will put the Federal Reserve in a tough position where it can’t raise interest rates so soon, since interest rate hikes will strengthen the dollar all the more and weaken prices further still. In essence, then, the upcoming flood of foreign investment into the U.S. and the continued debasement of the Euro will have the same effect on the USD as the raising of interest rates, pre-empting the U.S. Fed from raising rates itself.

And we all know what low interest rates for longer means… a continuation of the equity bull run.

• A better holiday shopping season is expected this year.

The fourth gallant knight riding to the stock market’s rescue heralds glad tidings of a holiday shopping season to remember. The National Retail Federation yesterday projected that “holiday sales would rise 4.1% this year to $616.9 billion, a full percentage point ahead of last year’s gain and markedly above the 10-year average annual pickup of 2.9%,” Market Watch reported.

One reason for the expected rise in holiday sales is an increase in nominal disposable personal incomes over the past three months by 4%, as compared to last year’s disposable income increase of just 2 to 2.5%.

Other factors promising to make this year’s shopping season better than last year’s include lower gasoline prices leaving shoppers with more spending money, no 16-day government shutdown which stopped millions of paychecks last year, this year’s shopping season has one more shopping day over last year’s (every day counts), and over the past 12 months more than 2.6 million new jobs have been created while the unemployment rate has fallen from 7.3% to 5.9%, giving more people more money to spend.

Investors Be Ready to Buy

While the current pullback in equities is likely not over just yet, investors should be getting ready to snatch up their favorite stocks at bargain prices.

Today’s release of the minutes from the last FOMC meeting three weeks ago will once again remind the markets that the Fed is in no hurry to raise interest rates, and should ease the markets’ jitters – or at the very least start slowing the sell-off down.

Next week’s ECB meeting should also revive investor optimism as stimulus plans in Europe will be reiterated, driving the Euro down some more, lifting the dollar up some more, and increasing the appeal of U.S. markets some more.

Later this month, the next FOMC meeting from the 28th to the 29th should give investors yet another reassurance that the Fed’s easy money policy is still in play to buoy the markets.

By that time, even more Xmas shopping forecasts will be out to put a little sparkle in investors’ eyes over the expected rise in spending this year over last.

Investors, thus, should keep their eye on their favorite stocks, ready to start buying a little at a time on each lower session. Come this time next year, you can bet equities will be running higher than they are currently, with some estimates calling for 2,100 on the S&P and 18,500 on the Dow – some 8 to 10% higher than they currently are.

So get ready to pull on your purse strings and start your buying. Our knights in shining armor are about to emerge out of the mist and gloom and save our burning trading houses.

Crony Capitalism in America
Approval ratings for the president and Congress are at all-time lows. And it's because Americans all know that crony capitalism rules. The question is: What can we do about it?
Investing in Japan
Will Japan's third arrow of Abenomics hit the bull's-eye? And if it doesn't, what does this mean for the Japanese and American economies?
Stock Buybacks and Special Dividends
Companies in the S&P 500 are spending almost all their profits on buybacks and dividends. Should you be concerned?
Buffett's Envy: 50% Annual Returns, Guaranteed
Warren Buffett once told investors at an annual shareholder meeting, "...it's a huge structural advantage not to have a lot of money. I think I could make you 50% a year on $1 million. No, I know I could. I guarantee that."