This Could Easily Race Higher in 10 Days...

Over the next 12 days, silver is likely to race even higher as Bolivia's Evo Morales threatens to nationalize the mining industry.

While he threatened the same action in 2006, don't put it past him this time, as a president tries to revive a damaged image.

No, really. He means it this time.

Seeing how mining is a major chunk of export income for Bolivians — and that Morales draws great support from miners — he'll more than likely push for that nationalization.

Nationalization is nothing new for this guy...

Ever since taking control in 2006, Morales has nationalized or raised taxes on oil, natural gas, mining, and telecommunications. There are no signs this trend will end any time soon.

The world's sixth largest producer of silver in 2010 could easily be nationalized within days.

That said, buy into the iShares Silver Trust ETF (SLV) before May 1, 2011. If nationalization results in tighter silver supplies, SLV will explode.

On the Flip Side

Nationalizing the mines means Morales could lose the support of mining stakeholders who have provided the president with a strong support base thus far.

So while you're riding SLV for speculative upside gains, you can also pick up the likes of Pan American Silver (PAAS), which has also fallen on nationalization fears and has more than likely priced that in on this spectulation: 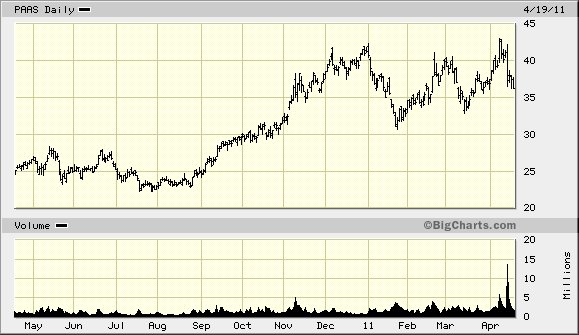 At risk of nationalization is Pan American's San Vicente Mine, which took the stock down from $40+ highs.

If nationalization is a no-go, the stock pops.

It pops even more with call options.

You can also check out Coeur d'Alene Mines (CDE), an old favorite silver company I've traded off and on for years. Even though the stock has dipped, it too is a buy. And it could pop on two things:

1. As I said with PAAS, no nationalization will result in higher prices.

2. Even with nationalization, I believe the threat is priced in. Heck, it may be a buy now if the Bolivian president stays true to his assurances that CDE's Bolivian mine, San Bartolome, will not be nationalized. 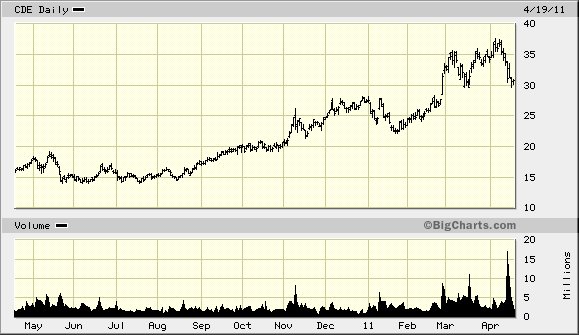 So there you have it — three ways to trade the Bolivian nationalization fears around May 1, 2011.

We have people wanting to exit U.S. dollar holdings. PIMCO's Bill Gross is shorting the U.S. dollar. And China wants to reduce its holdings of U.S. debt.

The only thing it's doing is signaling to the rest of the world that the U.S. dollar should be abandoned.

Utah just inked a bill that would recognize gold and silver coins as legal currency. If the bill passes, Utah would become the first of many states that have proposed the same thing...

What does that tell you?

It tells me silver is going much, more higher.

As always, you'll want to play it safe... I wouldn't risk the house.

Here's a live silver chart from Kitco.com (green is today, this thing is seriously ramping.)