Look, I’m not going to sugarcoat it at all. This market stinks.

It’s been terrible all year and it’s likely to get even more terrible before it gets better.

Inflation is ruining your savings as it eats away at every dollar that’s not earning 9% or more per year.

That’s a lot of dollars considering the average long-term gain for the stock market is 8% and the average certificate of deposit pays a whopping 0.33%!

So I’m not going to try to make it seem like inflation is a good thing. It’s not.

And I’m not going to say that the silver lining here is that valuations are much more reasonable.

They are, but that’s not a silver lining. It’s literally because the price part of the price-to-earnings ratio has been chopped nearly in half on a lot of stocks.

It’s ugly out there and it’s likely to get even uglier.

How Much Worse Can It Even Get?

I just read an analyst report this weekend that said investors should start to “nibble” at stocks when the S&P 500 hits 3,600. That almost happened on Friday.

The descriptions of how to buy made me chuckle, but the forecast is nothing to smile about.

They’re predicting a full-on crash if they think the S&P can get to 3,000.

That would be a full 38% drop from its highs this January!

It’s also saying we’ve got another 22% drop to go from here.

So I’m not really smiling as I write this. But I am trying to remain positive.

Because I know that all things must pass, both good and bad. So I know that there is a light at the end of the tunnel.

And I do want you to keep that in mind. It sucks to see your stocks drop and your accounts shedding value.

Trust me, we’re all there with you. Pretty much everybody lost money in this mess.

A lot of people will throw in the towel and decide that it’s a rigged game that can’t be won.

I’d bet a lot of people who got sucked into the Robinhood platform and the weird, wacky world of r/WallStreetBets are going to be some of the first to go.

But I hope that you’ll remember what I’m saying and won’t be one of them (even if that's how you got your introduction to investing).

Because it’s times like these that fortunes are really made.

It's like how when you’re investing in real estate, you NEVER make money when you sell. You can ONLY make it when you’re buying.

If you’re buying something for less than market value, then you can be sure you’ll make a profit when you sell it for market value years down the line.

And there are a lot of companies out there selling for less than their market value.

You just have to find them. Because there are also a lot still selling for far more than they’re worth.

Take Elon Musk’s EV company, Tesla. Its shares have shed 47% of their value so far this year.

But the stock is still trading at a PE near 100. It’s still got further to fall.

But what about the companies that make the things that Tesla turns into cars?

LG Chem and Panasonic make the batteries that keep the cars running. And even if Tesla makes zero cars going forward, all those ones on the road will need replacements eventually.

LG trades at a PE of just 14. And Panasonic is going for only 10 times its earnings.

Both have nicely growing revenues and lots of customers other than Tesla.

So without Tesla, they exist, but without them, Tesla does not.

And yet the market thinks Tesla will survive — but is pricing its suppliers like they won't.

And despite making the batteries that make Tesla’s No. 1 product work, they're not the most important suppliers either.

Both of those honors go to one tiny, under-the-radar company trading for less than one times its sales!

You see, Tesla makes a great car, but Elon’s got aspirations to make something even more revolutionary.

And with his track record, I’m willing to bet he’s the guy who can get it accomplished.

But he really can’t do it without the technology this company pioneered and perfected.

You see, Elon wants to build a robot. But not just any robot... This IS Elon Musk, after all.

And he wants to build a “humanoid” robot. 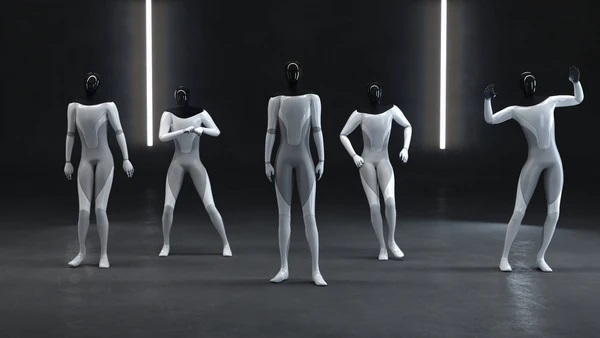 This “Tesla Bot,” or Optimus, as it’s known around the company, is a “general-purpose robotic humanoid” that Elon first announced last summer.

And he’s committed to building the first functional prototype by the end of this year (next at the latest).

But in order for the robot to work the way he intends it to — to move like a real human — he’s either got to invent his own technology or borrow it from someone with more expertise.

And my colleague, Christian DeHaemer — the guy who tipped me off to this whole thing — has me convinced that Elon already decided what to do.

And we’re pretty sure he’s taking the easy, more efficient path to success and buying that tech from a company that already has it.

A company with a market cap over 4,000 times smaller than Tesla's…

Because this company holds Tesla’s future in the palm of its hand.

That’s why I wanted to tell you about it right now, while the markets are discounting it so deeply.

Because if you wait for the economy to improve, which it will…

Or if you wait for the markets to come back up, which they will…

You’ll have missed out on another chance to make life-changing decisions.

Our motto over here is that fortune favors the bold. There’s a reason for that.

And let’s fire when we see the “whites of their eyes” so we know we’re hitting the bull's-eye.

It’s standing firm at times when others refuse that mints the fortunes that create family legacies.

Let’s get yours started today.

And I’ll come back later this week to help you keep building it bigger.