Why Natural Gas Prices Will Head MUCH Higher

No One Sees This Coming

We've gotten so used to these low prices that what's about to happen will surprise a lot of people.

So far, the price has only moved up about 15% this year. But it's going to move a lot higher than that.

The massive supply of shale gas that's been discovered in America in the last few years is nothing short of revolutionary. There's so much of it, we can't even use it all. Not even close.

Week after week, natural gas inventories have come in below their five-year average. This has been going on all year.

Yet it's being broken right now.

When a tend that strong breaks, investors need to pay attention, because there's probably some money to be made.

Fact is there's a whole string of natural gas trends that have been broken in the last few weeks:

This is a turning point for natural gas.

It's moments like these that investors look back on and think, “Why didn't I buy?”

The supply and demand story for nat gas right now is fundamental. The U.S. is using more of it, and supply is steady (the EIA says production growth will be under 1% for 2013).

At Wealth Daily, we've reported before that falling rig counts were going to lower production rates. This is happening now.

The number of rigs drilling natural gas wells is down 15% in the last six weeks: 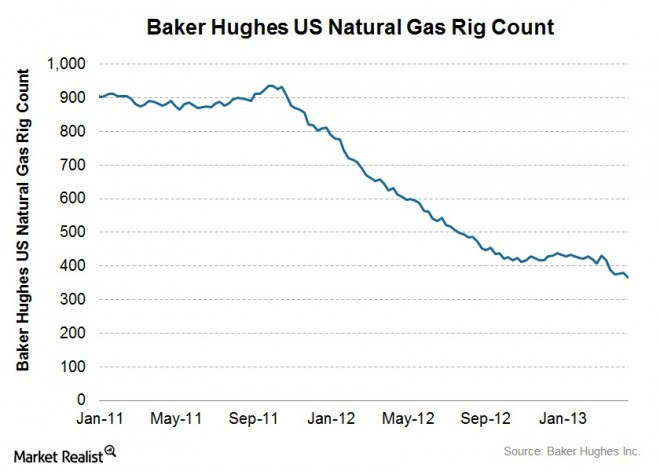 Now, many new wells over the last couple of years have been drilled at a loss. The sale price for the gas didn't cover the lease and drilling expense. So it makes perfect sense that companies don't want to drill new wells.

But the bigger question comes form the demand side of the equation. There's significant news there, too...

Enterprise Products Partners (NYSE: EPD) is a major pipeline operator in the United States. They service pretty much every major gas and oil field. In a recent presentation, Enterprise says it sees nat gas demand increasing between 11 and 20 billion cubic feet a day (BCFD) over the next five to seven years.

Utilities that burn gas to generate electricity will be the biggest source of growth, with demand rising 4 to 7 bcfd. Industrial and petrochemical use will add another 2-4 bcfd. And the U.S may export as much as 8 bcfd.

All told, we are not far off from a time when demand nat gas will be greater than production. And that will push prices up much higher than current levels.

There are a few ways you can play a strong rise for natural gas prices.

You could also go for a stock like Westport Innovations (NASDAQ: WPRT) that's driving natural gas engines for cars and trucks forward.

While I like Westport, it is a volatile stock. The company isn't profitable, and it's highly dependent on partnerships with companies like Cummins (NYSE: CMI). Plus there's competition: Honda will soon be offering a nat gas Civic.