We’ve Been Waiting 60 Years for This!

It’s one of those special weeks here at the Wealth Daily offices. There’s a holiday in the States (and much of the world) and the markets are closed this Friday.

And so are our offices. But we made a commitment to get actionable insights to you every day. And that includes weekends and holidays.

So that means, in order for everyone to have an extra day off this week, some of us have to pull extra duty and get our musings in a little early.

But this time, that worked out perfectly for yours truly. And that’s because I’ve got a whole series I’ve been planning for you.

And today is literally the perfect time to launch into it. So I’m going to use my time today and the next few times I write to you to cover an industry I see at an inflection point right now.

A Revolution 60 Years in the Making

In 1962, George Devol and Joseph Engelberger made history and changed the trajectory of modern industry forever.

What Devol and Engelberger created was a machine named Unimate. And it changed everything because it was the world’s first industrial robot.

U.S. automakers had already been researching automation, and GM immediately jumped at the opportunity to put Unimate to work in its die-casting factories.

Four years later, in 1966, Unimate wowed Japanese industrialists and ushered in a new era of Japanese productivity and prosperity.

Automakers were the first to get on board in every country where industrial robots like Unimate were introduced. But nearly every other manufacturer followed suit in swift order.

As semiconductor demand increased, so did the demand for robots to operate in the clean-room environments required for semiconductor manufacture at scale.

Robots became more common in many factories than human workers. But the revolution stalled out.

And now, 60 long years later, we’re finally at the start of another momentous shift in the way work gets done…

A shift that was ushered in six decades ago by an engineer and an entrepreneur trying to make it easier to manufacture a car.

In case you hadn’t noticed all the “help wanted” signs as you’ve been driving around town, let me be the first to inform you that there’s still a labor crisis going on.

Business owners are having trouble recruiting any help at all, let alone good help.

And the workers they are able to find have to call out for all sorts of reasons, especially lately.

I mean, there is still a pandemic going on out there. And we’ve all been asked to stay away from others if we happen to catch a case of it.

Then there are the parents who have to call out if their kid gets sick, or if their kid’s teacher gets sick and the school can’t find a substitute, or if their governor decides to close schools on a whim.

And for some businesses, the busiest times are also the times when people want the most free time.

Take restaurants and bars. Those are usually busiest in the evenings and on weekends. Why?

Exactly. Because that’s when people have free time.

And as a former bartender, I can tell you it gets a little tough not being free at the same time as everyone else in the world.

The money is great, but the work-life balance for jobs like that isn’t so much.

So in addition to it always being tough to find good help and the fact that it’s currently tough to find any help, the help you can find just isn’t always reliable enough for your customers’ standards.

So what’s a business owner to do?

Aside from reducing hours and limiting the number of customers served, you’ve really only got one choice. And that’s to automate at least some of your workforce.

Not because you want to eliminate human laborers — although if you did, you’d have a myriad of understandable reasons, but I’ll cover that in another part of this series.

No. You’re automating because you have to automate. If you don’t, you just have to shut down.

At least that’s the case with a small café in our sister city of Washington, D.C.

The owner recently “hired” his first robot server. And so far, the experience has been incredible.

Steak N Egg is a local favorite in northwest Washington. And its customers are used to its consistent service.

He hired a robot server named “Rosie” in a nod to the Jetsons’ stern but lovable robotic maid. 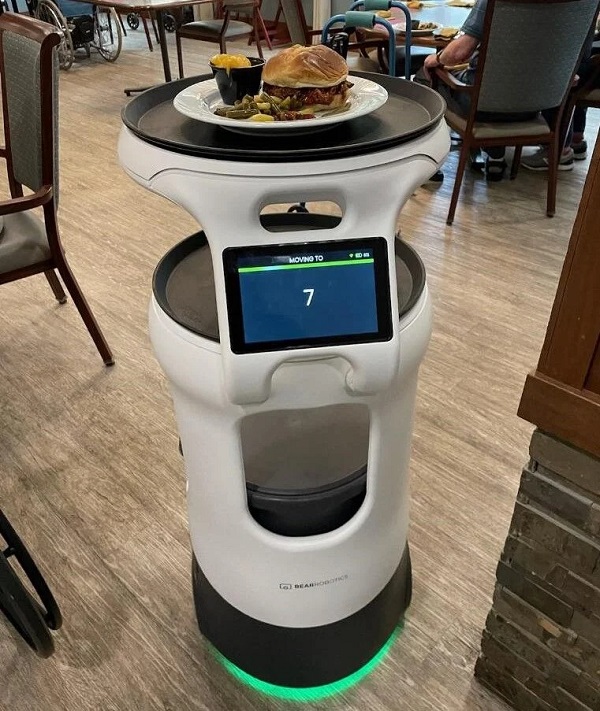 As you can see from the image above, Rosie looks more like a side table with a computer screen than a traditional server.

But she’s incredibly efficient, she never calls out sick, she works well with all the other staff, and her “salary” is only $1,000 a month despite working a full-time shift day in and day out.

And while it may seem strange to have your burger and fries served by a robot, you’d better get used to it.

Because we’re at a pivotal point in history. We’re about to enter the final stages of the robotics revolution. And there are several catalysts pushing us closer and closer every day.

I’ll cover those in part two next week, though. But for now, I want to share a way for you to profit from the monumental shift I see coming.

It’s a way to not only capture some massive gains from the robotics revolution, but also set yourself up with a steady and growing stream of income that will last a lifetime.

Think of it as insurance in case a robot ever comes to take your job. And make sure you get all the information today.

Happy Easter and happy Passover to those celebrating the holidays! I’ll be with my family watching Mom give a sermon and enjoying some good food and relaxation.

But I’ll be back on Monday. And you’ll want to keep an eye out.

Because in the next part of my series, I’ll explain exactly why I’m convinced we’re entering a golden age of robotics... and why it'll be ridiculously profitable.

P.S. Have you ever wished you had the chance to beat insiders at their own game? The secret club of insiders grows larger every day, and it would be a shame if you let them keep all those profits to themselves. However, with a special trading system, you have the chance to invest like an insider. You’ll be able to pull impressive returns on trades that are usually hidden from the average investor. Well, this is your lucky day! I want to introduce you to my colleague Alexander Boulden. He has spent years rigorously testing his special trading system — and now he's ready to reveal what America’s wealthy are up to so investors like yourself can regain control of your profits and financial destiny. Sign up today to be a part of Alex’s Insider Stakeout.