The Economic Recovery is a Lie!

I've argued time and time again that, due to the severity of job losses during the Great Recession, there cannot be a true economic recovery until the labor market has recovered.

Unfortunately, hiring was weak in September, continuing a slowing trend that began in the spring.

To make matters worse, the majority of jobs created last month were menial in nature (nearly 2/3 of them were truck drivers, bureaucrats, salespeople, and temps). These trends have been ongoing throughout this economic depression.

The number of new jobs wasn't enough to keep up with population growth.

And yet the unemployment rate fell.

Clearly, the "headline" 7.2% unemployment rate doesn't tell the whole story about the sad state of the American labor force.

You have to take any data from the Fed with a grain of salt, anyway, as the Obama administration has a vested interest in presenting the best-looking unemployment picture possible, just as all administrations have.

The employment-to-population ratio actually provides a much more accurate gauge of the health of the American job market — and wouldn't you know, it's been showing unhealthy readings since the economy crashed five years ago...

The proportion of Americans in the workforce has barely budged since falling from 63% to 58% during the Great Recession, as you can see on the following chart: 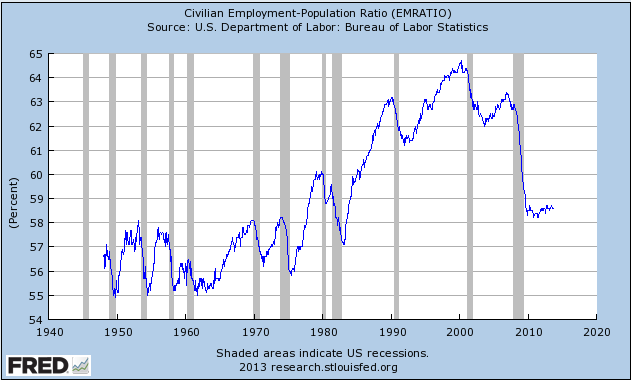 The last time the employment-to-population ratio was 58% — in the early 1980s — a relatively small proportion of American households sent more than one income earner into the workforce.

Now, in a nation of mostly one-breadwinner households, the 58% employment-to-population ratio was reasonable.

Today, however, due to a decline in real personal income (thanks for the inflation, Federal Reserve), most households send multiple income earners into the workforce.

In fact, it's not uncommon these days for households to have more than two income earners.

Under this paradigm, an employment-to-population ratio stuck at 58% like it's 1982 (when "homemaker" was still a common job title) is very unhealthy.

Also worth noting is that a large percentage of the 58% of Americans who do work are working lower-quality jobs than they were before the economy crashed.

Although the population of the United States has increased by approximately 20 million since 2008, there are 5 million fewer “breadwinner” jobs in this country than there were before this economic depression.

"Breadwinner jobs" are those positions with a base salary of $35,000 or more that enable one to live independently, however meagerly.

So the real health of the labor force is even worse than the unsettling 58% labor force participation rate!

Here we are, more than five years since the fall of Lehman, and the job market is still awful... and it's started to backslide again. 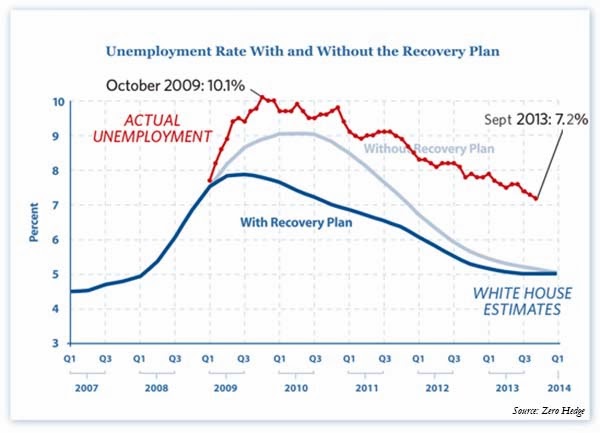 The Fed's Niagara Falls-scale liquidity pumping measures (I say "liquidity pumping" as opposed to "printing" because QE is only one of the Fed's tricks) clearly haven't had much impact on unemployment — or the federal government's $787 billion spending binge, also known as the grand "stimulus," for that matter.

Remember the laughable estimates of unemployment with and without the "Recovery Plan"?

According to the White House's October 2009 estimate (the dark blue line on the chart above), the Fed/federal government's plan should have taken us back to pre-recession unemployment levels by now...

Yet the unemployment rate sits at an unacceptable 7.2%.

And keep in mind the 7.2% headline unemployment rate belies the true awful state of the job market.

Considering the pitiful 58% employment-to-population ratio and the 5 million fewer breadwinner jobs since 2008, it would be an understatement to say that Washington's stimulus measures have failed to reduce unemployment. (That's assuming they were created for that purpose. More about that in a future article.)

We should expect more of the same from our esteemed central planners.

The Fed, which has officially delayed "tapering," will continue to pump indefinitely.

Uncle Sam will continue to borrow and spend like mad, whether he's wearing a DEM or GOP hat.

As a result, the "mother of all bubbles," as Nouriel Roubini has called it, will continue to expand...

And we'll continue party like it's 2006, only with higher unemployment.

We'll keep ignoring the fact that 2008 is just a couple of years away.