My next oil and gas trade could be my biggest gainer to date.

In fact Reuters says it could be "the next oil surprise in the U.S.," that it's a "huge formation... that could be worth up to $20 billion to shareholders."

The formation is known as the Utica Shale, the majority of which resides in Ohio.

It has the potential to be such a game changer that the Dayton Daily News said on September 10:

Ohio appears on the cusp of a 21st-century oil and gas boom that could net tens of thousands of new jobs and perhaps build a foundation for new industry.

They couldn't be more right. We're just now embarking on what will be a huge oil and gas renaissance right here in the United States.

We've seen it in the Bakken region (which boasts the lowest unemployment rate in the United States), the Huron Shale, the Eagle Ford Shale, and the Barnett Shale.

And there's a good chance the “boom years” will continue for quite some time — especially in light of this new find sitting in the middle of Ohio.

If all goes according to plan, Hess (NYSE: HES) believes the Utica Shale could deliver the same production and reserve growth that we've seen in the Bakken region.

I should point out, though, that Utica is not exactly new. None of these formations are really "new."

What is new are the fracturing techniques (hydraulic fracturing and horizontal drilling) that are proving to be a gold mine of resources for smart companies like Chesapeake Energy (NYSE: CHK). 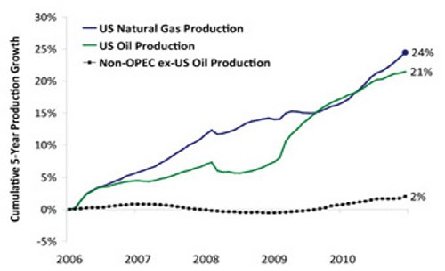 The chart above proves a major shift is underway in the oil and gas markets.

The market dynamics of Peak Oil have pushed oil to a current price of $89 a barrel. This could be the new "norm." Americans are paying an average of $3.50 per gallon to fill up their tanks...

With the era of cheap oil coming to an end, North American oil and gas production has nowhere to go but up.

This may be why Chesapeake just leased more than a million acres of the Utica property, believing it'll add another $15 billion to $20 billion to its bottom line. Hess Corporation joins them, recently spending $750 million to buy acreage in the Utica Shale.

Should those Utica prospects be right, the impact on Ohio jobs, economic growth, and state revenue could easily put the Eagle Ford to shame — and send stocks like Chesapeake skyrocketing.

Already, monies that drillers are paying per acre to Utica-location property owners have risen from $15 to more than $3,800 an acre, according to CantonRep.com.

If It Weren't for Fracturing...

States would have never reached the billions of barrels of oil and natural gas that lay beneath our feet — nor would those states have been able to tack on thousands of jobs in spite of the recession.

North Dakota was able to add thousands of positions thanks to the Bakken, even as U.S. unemployment rates hovered in the double digits.

The Eagle Ford Shale play accounted for more than 12,600 jobs, and added about $3 billion in total economic output and more than $110 million in government.

And it's likely to pay off big for Utica, too — and not just for Ohio businesses, but for taxpayers as well.

Just imagine the savings and the cash flow that Utica could foster.

Landowners, businesses, and the general public are already salivating over the coming drilling boom. A study by Questerre Energy Corporation found:

This could be big. And the only way to profit from it is to invest big.

How to Trade It Today

There's a small and relatively unknown stock that's just starting to take off thanks to the Utica Shale.

And it currently trades for $13. 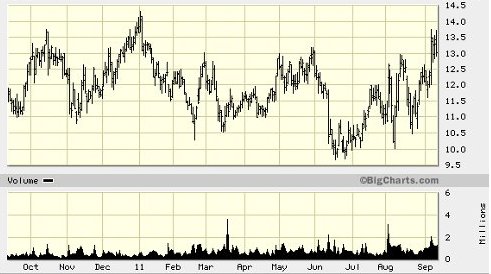 I don't see shares staying in this price range for much longer. In fact, I think this stock is a cool double. It's already up 35% from the correction lows of the summer, but the chart suggests this stock is in a new uptrend, especially if it breaks above $14.

This is a stock you want to own.

Sure, you'll want to own Chesapeake Energy here. And you want to own Hess. Chairman and CEO John B. Hess bought more than 174,000 shares for $10 million. We're recommending others in Pure Asset Trader as we speak.

I should point out that it's never smart to limit yourself to just one area that will be directly affected by this U.S. oil and gas renaissance...

To get complete articles and information, join our daily newsletter for FREE!