Written by Christian DeHaemer
Posted May 16, 2013

Take a look at this chart.

Just look at it!

You see that big fat candlestick at the end there? 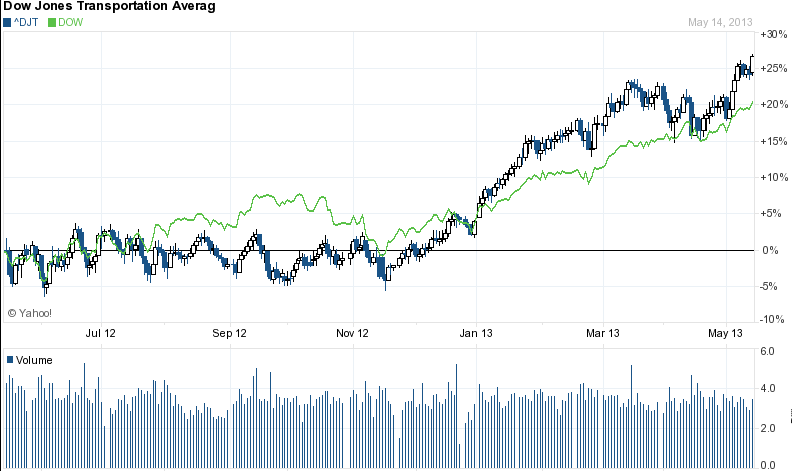 I don't know if you've heard about the Dow Theory before, so here's a little background...

The idea was dreamed up by Charles H. Dow in the late 1800s. (Charles also happens to be the guy that founded the Dow Jones Industrial Average, as well as a small-town rag called the Wall Street Journal.)

As you can tell by the chart above, the transports just launched. The industrials confirmed. The trend is bullish.

The 26% rally in the Dow Transports this year has, surprisingly, been driven by the railroads...

Union Pacific (NYSE: UNP) has operating margins of 32.54%! That's unheard of for a boring old railroad. Union Pacific just hit another 52-week high and is now a $73 billion company.

The primary reason for this is our old friend, the Bakken.

As you know, we love the Bakken more than late-60s muscle cars or WWII movies...

Not only is it turning America into an independent energy state again, but it's also the reason behind all this oil driving up demand for rail tankers.

It's no wonder Warren Buffett bought up BNSF and had Obama shut down the Keystone Pipeline.

Shipments Down in Q1

As we all know, nothing is as it seems in the stock market. Looking on the face of it, total railroad freight was down in the first quarter. That's according to a recent Association of American Railroads report: The total load carried on North American rails dropped 1.5% in the first quarter...

What gives? Why is UNP hitting new highs?

It's all about oil.

Petroleum traffic has seen a jump of 46% in Q1. The United States is now producing more than seven million barrels of oil a day.

Over the past four years, oil shipments as a percentage of total rail volume have grown from 3% to 30%. And this trend is just getting started...

One company you might want to put on your radar is American Railcar Industries, Inc. (NADAQ: ARII). This $764 million company, in terms of market value, makes, repairs, and refurbishes hopper and tank railcars.

And get this: Our old friend Carl Icahn has been buying. He now holds 55% of the outstanding shares.