These Stocks are Winning

Four years later, in 1863, they took on a couple new partners and built an oil refinery to take advantage of the fact that whale oil had become too expensive to be used as lighting fuel.

In 1868, one of these men bought out two of his partners, brought his brother William in, and started buying out rival refineries. By 1872, they had acquired 22 of their Cleveland competitors. And by the end of that decade, this rising company — named Standard Oil — was refining 90% of America's oil.

Rockefeller retired from day-to-day operations with Standard Oil in the 1890s and turned to life as a philanthropist. He gave away around $500 million during his life.

And today, a good portion of his fortune — some $860 million — lives on in as a philanthropic fund called the Rockefeller Brothers Fund.

As you might guess, the Rockefeller Brothers Fund has always held oil and gas investments, including ExxonMobil, the largest successor to Standard Oil.

But now, the Rockefeller Brothers Fund is selling out of oil investments altogether. In fact, it is getting out of all fossil fuels — investments in coal and tar sands have already been sold.

The trustees of the fund, which include two Rockefeller heirs, have decided to end investments in companies that contribute to carbon emissions tied to climate change. Steven Rockefeller, a son of Nelson A. Rockefeller and a trustee of the fund, said, “We see this as having both a moral and economic dimension...”

Now, you probably know I'm not a scientist. I can't tell you that the oceans are getting warmer and contributing to more frequent and more violent storms. I'm an investment analyst, and when big money makes moves, I pay attention.

The stock market is the ultimate discounting mechanism. There is more money, more resources, and more human intelligence focused on the companies that make up the U.S. stock market than other place in the world.

You want to learn how genetic drugs target DNA in order to cure cancer? You'll find the answers among the companies in the stock market. You want to learn about wireless networks? Hydrogen fuel cells? You can find that, too.

The decisions investors make aren't academic ones without consequences. The smartest, savviest, and most influential people in the world are putting their money on the line.

So again, when big money makes moves, I pay attention.

The $850 million Rockefeller Fund counts as big money. And it isn't alone...

According to the New York Times, 180 institutions and hundreds of wealthy individual investors are selling ~$50 billion in assets tied to fossil fuel companies and investing this money in cleaner alternatives.

Now, while $50 billion is a lot of loot, it's really not that much in stock market terms. Exxon alone is worth ~$400 billion.

No, the point here is that these investors are operating on the stock market's most basic emotions: fear and greed. They are fearful that legislation that makes carbon emissions more expensive is coming and will make some companies less profitable...

And perhaps more importantly, they see a huge profit opportunity as renewable energy makes more inroads into the U.S. and global economy.

A Drop in the Bucket

Over the last four years, solar energy capacity has grown 418%. Yes, that is pretty incredible growth. 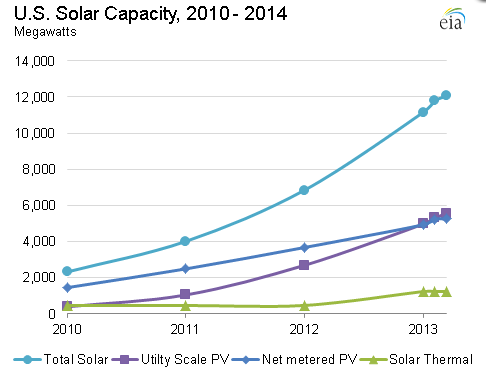 Likewise, by the end of this year, electric car sales will have grown something like 677% since 2011. And yet total market share for electric cars will be less than 1% this year. That's even less than solar.

But it hasn't stopped electric car company Tesla (NASDAQ: TSLA) from growing revenue from $200 million to $2 billion in three years, while its share price ran from $30 to $250...

Again, I'm not a scientist. But as an investment analyst, the signs are clear: There is still a ton of money to be made in the renewable energy space.

I've showed a group of investors how to use a special, low-risk strategy to take more than 15% in cash “dividend” payments on this stock in the last six months. In fact, these investors have taken as much as $2.10 per share in cash from this stock.

If you want to learn how to take special “dividend” payments like these frequently and from a wide range of stocks, I've created a special presentation that shows you how.