The World According to Bill Gross Part 3 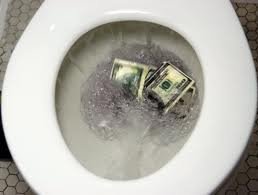 Even though he's a Dukie, Bill Gross is one of my favorite financial commentators.

And while he does “talk his book” to a certain extent, Bill insights are usually spot-on—particularly his big-picture outlook.

The founder and managing director of PIMCO, Gross is the 800 lb. gorilla in the bond world. So when he puts out his monthly missive, it tends to be widely read—-even when he starts off talking about “doo-doo”.

In the meantime here's the condensed version...

Pacific Investment Management Co.’s Bill Gross said deficit spending by governments that seek to maintain artificial levels of consumption “can be compared to flushing money down an economic toilet.”

“I will go so far as to say that not only growth but capitalism itself may be in part dependent on a growing population,” Gross wrote. “Production depends upon people, not only in the actual process, but because of the final demand that justifies its existence.”

Deficit spending will be unsuccessful in what Pimco calls the “new normal” because deleveraging, re-regulation and de- globalization produces structural headwinds that lead to slower growth and lower-than-average investment returns, Gross said.

Japan is the modern-day example of what deleveraging in the face of a slowing and now negatively growing population can do, Gross said. Prior deleveraging periods, such as what the U.S. and European economies experienced in the 1930s, exhibited a similar demographic with the lowest levels of fertility in the 20th century and extremely low population growth, he wrote.

“It means investors start to shift money from stocks to bonds because those are more certain,” Gross said during a “Bloomberg Surveillance” radio interview today with Tom Keene. “Near term, it’s bond friendly but long-term negative for inflation and investments in general.”

The World According to Pimco's Bill Gross

The World According to Pimco's Bill Gross Part 2