Over the past couple years, we’ve almost become numb to hearing about shortages.

When COVID first showed up and world governments responded by locking their citizens indoors, there was an immediate toilet paper shortage as people hoarded supplies for the lockdowns.

There were also shortages of personal protective equipment as businesses and “entrepreneurs” stocked up on N-95 masks and latex gloves.

Then as we switched our spending habits from bars and restaurants to Amazon and Wayfair, there was a shortage of shipping containers.

As the global lockdowns continued, we experienced shortages of workers from nurses to truck drivers.

There have even been shortages of aluminum cans for “bottling” beer in.

So I’ll forgive you if you rolled your eyes at the title of this piece.

But I’m 100% serious when I call this the ultimate shortage.

And that’s because we can live without all the other things we’ve been short on recently.

We won’t enjoy it, but we don’t have to have those things to survive.

But now, we’re very quickly running short on one resource we all MUST have.

Our world leaders are helpless to stop it.

And some are even hell-bent on making it worse…

And while you might not have heard it on the mainstream news, we’re currently in the worst one in the history of the world.

He says the Programme is setting new records left and right and has been since 2021 because 50 million people across 45 countries are “on the verge of famine.”

And another 345 million people are approaching starvation across another 80 countries.

According to The World Bank’s most recent food security update, almost all low- and middle-income countries are seeing food inflation in the double digits.

And in recent months, the share of high-income countries with sky-high rates has climbed to 83.3%. 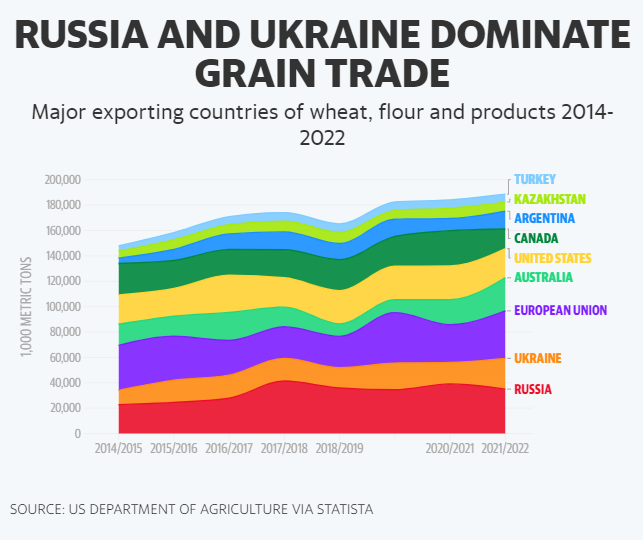 You can only account about 50 million of the newly starving people to that trade disruption.

So it’s not just “Putin’s price hike” that’s making food unaffordable for so many people.

This is something that’s been building for years and years and is only exacerbated by the war in Ukraine.

In fact, we were already approaching all-time-high food prices BEFORE the invasion of Ukraine commenced and pushed them over the top: 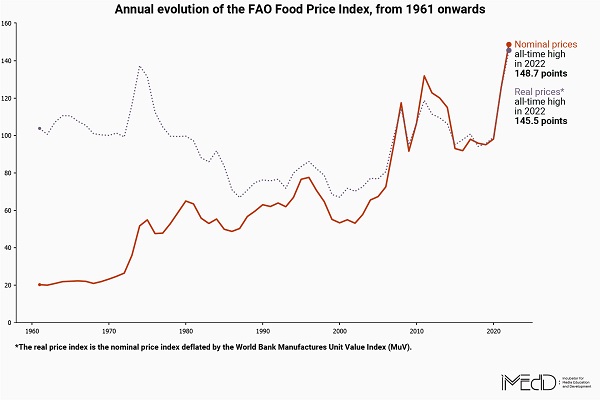 And as you know from my article on Friday, our Western leaders are hell-bent on making it worse by gutting the farming industry and limiting access to the tools needed to grow enough food to feed the world.

So if you were hoping the government would step in to help, you’re sadly mistaken. It will be the governments that drive the final nail into our collective coffin.

That is, if we aren’t able to come up with a solution for ourselves. But who better to solve the world’s biggest crisis than the private sector that’s led the world forward for so many centuries?

Who better than the private sector that gave us medicines, antibiotics, air conditioning, air travel, and so many other gifts we take for granted in the modern world?

The Next "Biggest Company in the World"

I say nobody. And I say that because it’s always the private sector and private industry that come to the rescue of governments that have regulated themselves into a corner.

But I also say it because I’ve been watching this crisis develop and continue to unfold.

And as an investor, I’ve watched for companies developing new technologies or processes that will help solve the problem.

Because solving a crisis is a great way to become an indispensable part of the global economy.

Back in 1867, Henri Nestle developed a milk-based baby food and began marketing it.

In the same year, Daniel Peter began several years of work that would culminate in the invention of milk chocolate.

But in order to complete his work, Peter needed the process Nestle had invented to remove all of the water from the milk.

The two businesses merged and Nestle was born. But it wasn’t until 1914 that the world saw the real value in Nestle’s business.

You see, at the onset of World War I, at that time still called The Great War, there was a shortage of dairy products and much difficulty getting what was available to the soldiers on the front.

But powdered milk doesn’t spoil no matter how long it takes you to ship it.

And powdered milk was the invention that allowed Nestle to make baby food and Peter to make milk chocolate.

The tiny Swiss company became the supplier to the world and now it’s a $336 BILLION behemoth that rakes in nearly $100 billion a year in revenues!

Today, it’s the largest publicly held food company in the world. It got there by solving a shortage…

And its investors were incredibly well rewarded. The shares have been listed on the Zurich Stock Exchange (now the SIX Swiss Exchange) since 1873.

But even an investment made as late as 1995 would have already returned 10 times its value: 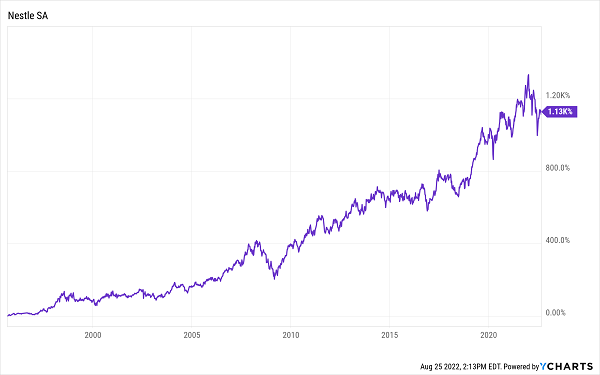 So when I say I’m pretty sure I’ve found the next Nestle, you know that means I’m seeing massive gains ahead of this stock.

In fact, I’m so sure it’s going to be a 10-bagger or bigger I’ve put all the details into a free report I want to share with you today.

All you’ve got to do is give my research a read and you’ll have everything you need to get invested today, BEFORE the word gets out and this sub-$1 stock starts trading for $10 or more.

Get all the details and get yourself invested today.