The Second Bakken Rush is On

Today I turn your attention to my colleague, Keith Kohl.

Keith has been covering the domestic Bakken oil formation for the past two years in his Energy and Capital letter. (I could probably count on one hand the number of energy analysts out there who know more about this region than Keith.)

And as you may know by now, there's a big story unfolding in the Bakken... specifically in the suddenly booming state of North Dakota.

Not only have new oil well tests proven positive in the Bakken (resulting in excellent gains on our Bakken plays), but now comes word of something even bigger... potentially 2x bigger.

Below are Keith's finding...

I distinctly remember the day a millionaire bought me a beer.

Although it has been nearly two years since I went on my pilgrimage to personally see the Alberta oil sands, one episode has continued to replay in my mind.

We were halfway to Fort McMurray as my cohort and I drove into the tiny town of Portal, North Dakota. . . and I'll confess I half-expected to see tumbleweeds sweeping across our path. After all, my high school had ten times more students than this town has residents.

Before crossing into Saskatchewan, we decided to stop at a local watering hole. Inside, there was just one patron occupying the bar. Once we ordered a round, it wasn't long before our affable bartender was droning on about North Dakota's stagnant oil industry.

That's when I noticed the older fellow next to us shaking his head, smiling. I dismissed it at the time, my mind focusing elsewhere. Several minutes passed before he joined the conversation, which had moved on by then. This gentleman was visiting family in Portal and lived in a nearby county. When the topic of the Canadian oil sands came up, he chuckled again.

When he eventually got up to leave, he politely told the bartender to put our next round on his tab. We thanked him again as he left. I really didn't think anything more of that saloon.

By now, you should be well acquainted with the Bakken formation. Ever since the USGS released its assessment last year, the Bakken has been considered one of the best oil plays in the U.S.

Stretching across Montana, North Dakota, South Dakota, Saskatchewan, and parts of Manitoba, the USGS reported there are up to 4.3 billion barrels of technically recoverable oil in the formation. That number is 25 times larger than their 1995 estimate of 151 million barrels of oil and is hailed as the largest continuous oil formation ever assessed by the USGS.

Not too shabby, considering U.S. oil production has been going downhill since the 1970's.

In the past, the Bakken formation was referred to by oil companies as a 'bailout zone.' In other words, companies would only drill the Bakken as a last resort to help recover a little of their investment. The problem was simple: There was no way to effectively extract the oil in the Bakken. That is, until new techniques in horizontal drilling and fracturing were developed.

And recently, things have gotten even better for the Bakken.

The Three Forks - Sanish formation lies directly underneath the Bakken zone. Up until recently, the common belief was that this formation was merely a drip pan to the Bakken.

Let's just say it's enough for several companies to re-focus their drilling targets on the new area. Although it's simply too early to call, don't be surprised to see more companies go after the Three Forks-Sanish formation during the next year.

Furthermore, it's a second chance for companies that came up short in the Bakken, yet still own leases in the area.

The second Bakken rush is on.

A Second Round of Bakken Profits

Naturally, investors have been playing the Bakken for the last few years with tremendous success.

Back in March, when oil prices were finally on the verge of breaking past $50 per barrel, I showed readers three opportunities. All three had a stake in the Bakken formation and have performed admirably over the last six months.

One in particular, Whiting Petroleum (NYSE: WLL), has given my Energy and Capital readers (assuming you were paying attention) an impressive 130% since early March: 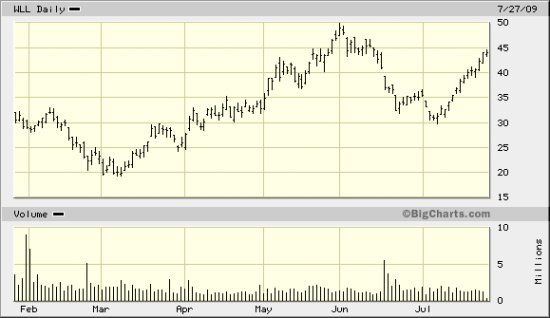 And after a recent interview with Whiting execs, there are even more reasons to keep a bullish outlook. Initial flow rates from one well were about 4,570 boepd, which is the highest rate for a Bakken well in North Dakota to date. According to the company, their overall production during the first quarter was 54,320 boepd, 28% of which came from the Bakken.

Thinking back to that saloon in Portal, it took me some time to realize the gentleman who bought me that beer lived in Mountrail County. By that time, EOG had been producing impressive drilling results at the now-famous Parshall Field.

He may not have been driving a brand new Ferrari, still favoring his old pick-up. . . but I knew there was something more to the smile he gave us after hearing about the Bakken.

Editor's Note: With the possibility that the Three Forks-Sanish formation is a separate reservoir from the Bakken, you now have a second chance to cash in on the best and brightest Bakken players. This new report that we've prepared give you the latest news on the second Bakken rush, as well as a few Three Forks-Sanish plays that I believe will double alongside higher oil prices. Click here to read about this breaking opportunity. . .