The Rise of Esports and Video Game Investing

Dating back to ancient times, games, in some form or another, have been an integral part of human culture. The world’s first gaming pieces date back around 5,000 years, about as old as civilization itself.

For thousands of years, gaming was almost exclusively used for killing time and having fun, but at some point in human history, it also began to be about big business and turning a profit. Over the last half-century, gaming has become a major moneymaker for investors.

The biggest turning point for Wall Street was in 1960, when a little-known company out of California first hit the pubic market. That same year, the company introduced “Chatty Cathy,” a talking doll that would revolutionize the toy industry.

By 1963 this company was listed on the New York Stock Exchange, and by 1968 it had released the now-iconic toy brand “Hot Wheels.” This same company was also behind trademarked Barbie dolls, which are still widely recognizable today.

If you haven’t guessed already, I’m talking about Mattel, Inc. (NASDAQ: MAT). Though rapidly declining in relevance today, Mattel was once arguably the king of toys and gaming. The company’s dominance propelled some very impressive profits for its investors for half a century: 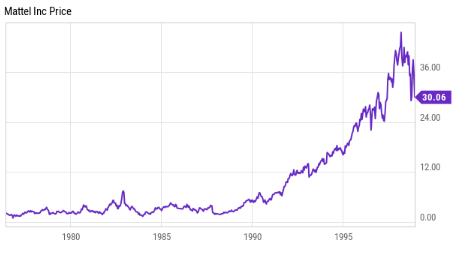 Mattel, though, wasn’t the only company to make investors rich off of our natural demand for play. Hasbro, Inc. (NASDAQ: HAS) first went public in 1968 and has since monetized a number of iconic game titles including Jenga, Clue, Bop It, Dungeons and Dragons, Battleship, Cranium, Candy Land, Scrabble, Trouble, Trivial Pursuit, Risk, Monopoly, Magic the Gathering, and many more.

Yet despite their long histories of success, even these gaming giants (and their investors) aren’t immune to today’s rapid pace of technological innovation.

Once a staple of American culture, board games and physical toys are taking a back seat to a new breed of play, particularly in the hearts and minds of younger generations. Hasbro and Mattel, quite frankly, are dinosaurs when lined up with the gaming companies of today.

Investing in the “Leisure Economy”

The post is really worth a read on its own, but to summarize the thesis as quickly as possible, Helfstein argues that technological advancements are freeing up people’s time and increasing the demand for leisure activities.

Americans may feel busier than ever, but the time spent working has actually declined in aggregate. Automation, which makes work more efficient, is a big reason why. Statistics on working hours show that in developed countries, people have more spare time than they did in the 1970s, working an average of 4.8 less hours per year. At that rate, the population could have 12 million years of additional leisure time by 2030.

Many other data sets reflect a similar trend.

Now, as we mentioned, the landscape of social play has been shifting away from board games and physical toys. According to a recent survey conducted by Barclays, 73% of parents remember regularly playing board games as children, yet only 44% of the children today play board games.

The culprit behind this shift should be obvious enough. Video games are leaving Monopoly dusty on the shelf and have already put companies like Toys "R" Us in the grave. It’s not that younger generations aren’t playing anymore; it’s just that they’re going somewhere else for fun.

Limelight Networks finds that gamers between the ages 18 and 25 spend more than seven hours each week on gaming. The reality, though, is that this modern gaming trend transcends demographics.

According to data from the Bureau of Labor Statistics, the amount of time Americans, regardless of age, spend playing video games has risen by a staggering 50% since 2003.

Further, according to Nielsen, 64% of the United States population, aged 13 and older, are now gamers.

The video game industry, of course, is nothing new, but it wasn’t until recently that gaming became a widely accepted social activity. Once associated almost entirely with “nerd culture,” gaming has officially hit the mainstream.

And while viewership for major traditional sports like the MLB is actually shrinking, the global esports industry is expected to grow at 22.3% per year through 2022. According to Research and Markets, we're looking at a $3 billion business by 2025.

You don’t have to be into esports, of course, to benefit from this trend. All you really need to know is that the growth is there. Like it or not, video games are the next big sport, so investors might as well hop on the train and get in on the action.

Currently, there are only a few public companies that dominate the industry landscape. The following players are a good place to start: