The Next Mega-Trend in Housing

This Trillion-Dollar Boom Has Just Begun

The housing market may still be down for the count, but if there's one pocket of absolute strength, it has to be apartment-based REITs.

In the wake of the housing bubble, the rate of homeownership has taken the biggest tumble in 70 years.

The end result has been a bona fide boom in rentals as millions of displaced homeowners scramble to pick up the pieces.

But according to Oliver Chang, a housing and securitized products analyst at Morgan Stanley, this trend toward rentals is just getting started...

In a recent report, Chang explains why those same displaced homeowners will eventually add $72.7 billion in rent payments to apartment-based REITs over the next five years as the home ownership rate drops all the way back to 60%.

Chang's report is consistent with an earlier claim made by the head of Freddie Mac's multifamily division — the same folks who projected the apartment-based asset class will need nearly $1 trillion in new capital over the next decade to meet this rising demand.

That works out to be $100 billion every year earmarked for new rentals over the next 10 years.

According to Freddie Mac's David Brickman, those units will be sorely needed, since millions more families will be looking to rent as the foreclosure crisis reaches its ultimate end.

“For every 1% that the current homeownership level of 66% decreases,” Brickman says, “1 million individuals will become renters.”

Using Chang’s call for an eventual homeownership rate of 60%, that translates to at least 6 million new people who will be writing rent checks in the years to come.

Needless to say, that sets up perfectly for the nation’s landlords as the “ownership society” continues to wobble. In the last 12 months alone, rental household formations have grown by over 1 million — about 3x the historical average.

A Tsunami of Foreclosures

As you might have guessed, the primary driver in this forced migration is a tsunami of foreclosures.

The latest data reveals this wave is building again, now that banks have finally started to move forward from the robo-signing debacle...

According to RealtyTrac Inc., some 77,733 properties received an initial default notice last month — up 10% from September.

All told, notices of default, scheduled auctions, and bank repossessions hit a seven-month high in October.

To make matters worse, the number of U.S. homeowners who are under water on their mortgages continues to grow, putting millions more borrowers on a slippery slope that could lead to even more defaults in the future.

CoreLogic reported last week some 22.5% of all U.S. homes were under water as of June 30th.

That means there are another 10.9 million properties out there teetering on the edge of the same abyss.

This situation has created a steady stream of new applicants for the nation's landlords as the housing bubble works in reverse.

And that sudden decline has given landlords all the leeway they need to hike up the rent...

According to Reis, a commercial real estate outfit, effective rents have since increased in 75 of 82 markets, with rents climbing to an average of $991 a month from $967 a year earlier.

And apartment owners can expect a continued flux of tenants to create even higher returns.

Four Ways to Ride This Trend

So how can individual investors take advantage of this bullish trend?

The easiest way is through REITs that specialize in apartments — or with mutual funds that own mostly apartment REITs.

That said, here are four of apartment-based REITs that have been on the rise of late: 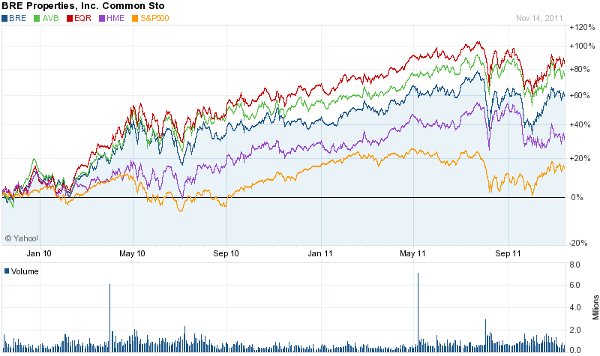 As you can see, all of these companies have consistently outperformed the S&P 500 over the course of the last two years...

The best part for investors is that they can win both ways in this sector: first with price appreciation; second with a nice dividend.

As the Fed continues to keep rates at zero and works to pressure yields on U.S. Treasuries even lower, stocks with a steady history of dividend payments become increasingly attractive to yield-hungry buyers.

With yields on the benchmark 10-year Treasury note now hovering in the 2.0% range, dividend-paying stocks will continue to outperform in 2012 — just as they have throughout the entire downturn.

To get complete articles and information, join our newsletter for FREE!
Plus receive our new free report, "How to Make Your Fortune in Stocks".