The Hidden Agenda Behind Biden and Xi’s Meeting

President Biden and Chinese President Xi Jinping met this week at the G-20 summit in Bali.

Apparently, it cooled tensions between the two countries, with Biden expressing that he didn’t want conflict. He said, “As the leaders of our two nations, we share a responsibility, in my view, to show that China and the United States can manage our differences, prevent competition from becoming anything ever near conflict, and to find ways to work together on urgent global issues that require our mutual cooperation.”

During the three-hour face-to-face meeting, Biden reiterated that the U.S. wants to compete directly with the PRC by investing in domestic programs.

Experts aren’t entirely sure what to make of the whole affair.

NPR interviewed Yu Jie, a senior research fellow at Chatham House, who said, "It will not resolve any substantial grievances both sides have had against each other, but only slowing down the deterioration of their relations."

While the meeting didn’t immediately resolve any issues (as if that were even an expectation), it highlighted that this fierce competition is coming to a head.

Specifically, the focus is shifting to the rare earth metals required to build the crucial technologies behind semiconductors and batteries.

Where Do Batteries Come From?

For more than three decades, lithium-ion batteries have been the go-to industry standard in virtually all electronic devices. They’re light-weight and relatively slim, last long enough, and are generally safe.

But there’s a second, equally as important half to the lithium-ion battery that most people don’t pay attention to called graphite. It functions as the key component of lithium-ion batteries, as it’s the primary material used in the anode, which is one of the two electrodes in a battery.

Here’s a diagram from Purdue University of your typical Li-ion battery: 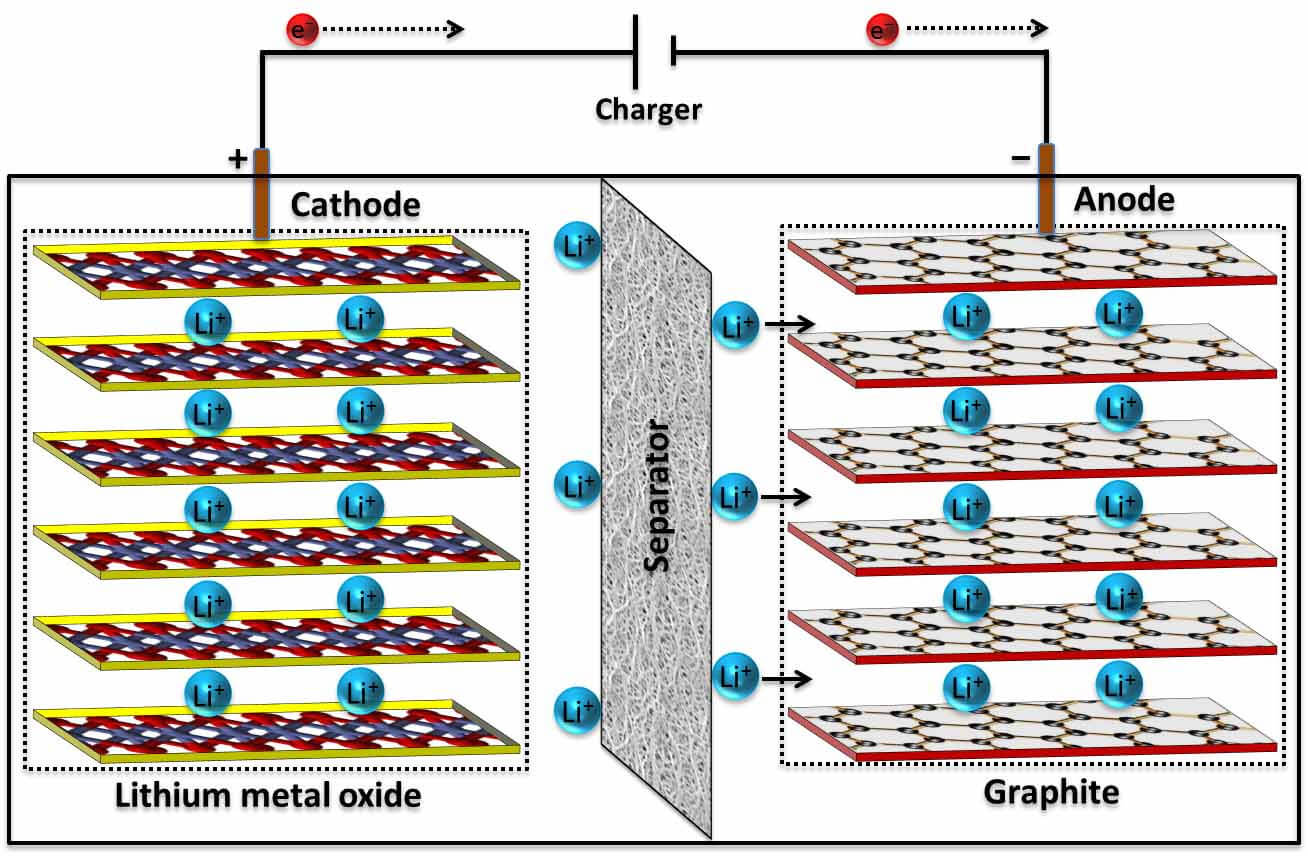 Natural graphite's cheap and highly conductive, but there are two glaring problems with it.

First, China's the world's largest producer of graphite. According to the U.S. Geological Survey (USGS), China produced 82% of the world's graphite in 2021. So if the U.S. wants to compete, this is a lucrative spot to start.

The second problem is it’s incredibly dirty to mine the stuff. The Washington Post published an exposé in 2016 showing just how much pollution is created from graphite factories. While graphite has become an indispensable resource in the new millennium, the Post notes, “The companies making those products promote the bright futuristic possibilities of the ‘clean’ technology. But virtually all such batteries use graphite, and its cheap production in China, often under lax environmental controls, produces old-fashioned industrial pollution.”

One solution is to use synthetic graphite, but it's prohibitively expensive. According to Fastmarkets, local Chinese battery manufacturers are using more natural graphite because of the high cost of synthetic. Apple’s already announced that it’s switched to using all synthetic graphite in its batteries. The company's likely looking for a way to keep costs down now...

A second solution is to create batteries with graphite's cousin, graphene.

By now, you’ve probably heard us talk about graphene.

How the 2010 Nobel Prize in Physics was awarded to Andre Geim and Kostya Novoselov for their “groundbreaking experiments regarding the two-dimensional material graphene.”

How graphite's merely one layer of graphite atoms, so it’s extremely lightweight and flexible.

How it’s the most conductive material scientists have ever found, making it perfect to use in batteries.

After the discovery, the media and investors called it the “graphene gold rush,” saying the material would be used in everything from bulletproof armor, batteries, new electronic circuitry, water filters, ultralight airplanes, solar cells, and wearable medical chips to antennas, megastructures, and even a space elevator...

Today, we're on the cusp of the second graphene gold rush.

We're just starting to see them used in hybrid battery packs, including the ElecJet Apollo Ultra and the Real Graphene G-Pro 10,000. The Apollo charges to 100% in 27 minutes. That's a full charge in less than half the time it takes to charge an iPhone. It's every EV owner's dream.

Android Authority says, “When it comes to batteries, graphene’s capabilities can be used in a number of ways. The ideal use of graphene as a battery is as a ‘supercapacitor.’ Supercapacitors store current just like a traditional battery but can charge and discharge incredibly quickly.”

In fact, in 2014 Elon Musk said Tesla was looking into a graphene battery but that it would increase the price of its cars.

So in order for a graphene battery to take on widespread adoption, it needs to be cheaply produced.

What if there were a company producing cheap, clean graphene right here in the U.S.?

One that uses a new patented graphene production method that makes a clean, high-quality product more cheaply than anyone else out there.

Graphene's set to take over the battery industry that's projected to grow to $198 billion in just five years.

It's only going to keep expanding with increased market interest.

It could be like investing in lithium-ion before the iPhone came out...