Ever since the start of the coronavirus panic, I've been hearing a growing tide of apparently reasonable voices urging me to be calm; avoid doing crazy things, like pulling my money out of the market; stockpile N95 face masks and household essentials; and generally, to let sanity prevail.

My natural instinct, of course, is to listen to these voices... But now I'm starting to wonder which side is being irrational.

A month ago, it was business as usual in Europe. The sickness was largely an Asian story — a place far enough away from our shores that it didn't even deserve top billing in our mainstream news outlets.

In the four intervening weeks, however, things have changed — to say the least.

My nephew, who was in the middle of a semester abroad in Spain, just got sent home... but not to his university campus in Northern California. He got sent home to Montgomery County, Maryland because his school just announced that all classes would be canceled for the rest of the school year.

My extended family living in Rome is now sequestered in their apartments, unable to leave without permission.

On American soil, restaurants are empty, survival gear is vanishing from shelves, and the stock market is in freefall.

And judging by the major indicators, this is still just the beginning.

Yesterday morning (March 11), I visited a website that tracked the reported cases across the globe. 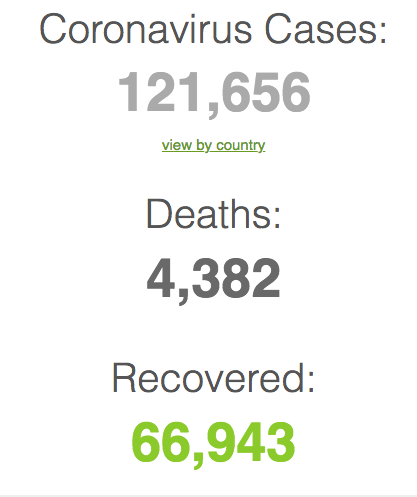 Here is where the numbers were just three hours later. 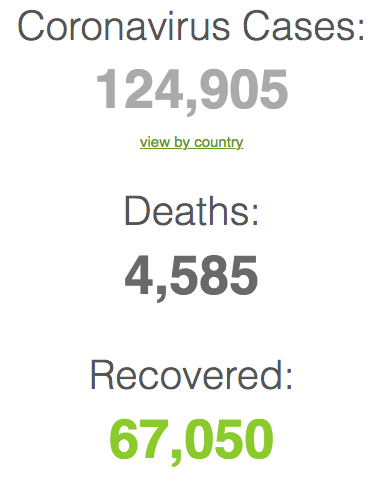 More than 3,000 cases added in just three hours, and bear in mind, we've not even hit the most vertical part of the curve yet. We're still just ramping up, probably at the start or closing in on the middle of the "slow start" phase of the curve pictured below. 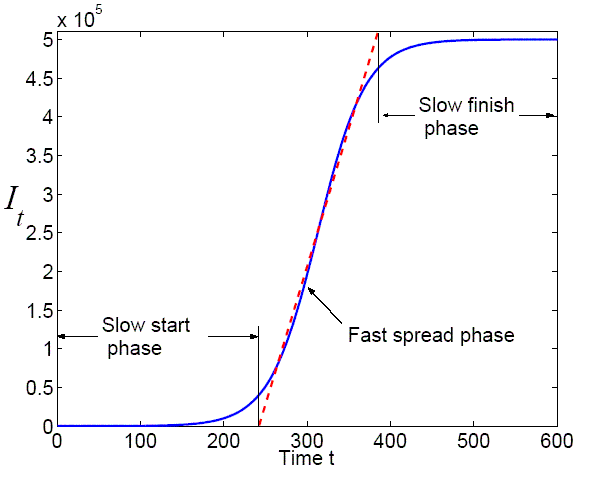 Once we hit the next phase, the real fireworks will begin.

All irrational panic, many continue to insist. But what do the experts in the field say?

Two nights ago, Joe Rogan interviewed infectious disease expert Michael Osterholm, a man with decades of experience in the development and life cycle of viruses just like this one. Let's just say that I wasn't overwhelmed by a fuzzy sense of comfort and safety.

According to Dr. Osterholm, coronavirus is especially dangerous because it spreads just like the flu. It's airborne and can be transmitted simply by standing at a normal conversational distance from an infected individual.

Scariest of all is that people become infectious before exhibiting any of the now known symptoms of the disease — meaning quarantines are only going to be somewhat effective in decelerating the spread.

Notice my choice of words: decelerating, not halting. There will likely be no halting of this disease until a vaccine is introduced or until it makes its way across the world and kills who it's going to kill while allowing the rest of us to develop natural immunity.

Dr. Osterholm went on to say that he would not be surprised to see a fatality figure of 10–15 times the normal seasonal flu in just the next few months.

Given Dr. Osterholm's expectations, that means up to half a million Americans might ultimately perish from this virus, with 50 million hospitalizations required for moderate to severe cases.

As of this very moment, only 1,364 cases have been confirmed stateside. Thirty-eight are dead. Fifteen have recovered. 1,311 are still "active."

So, yes, this is still just the very start. And yet, already, the panic is real.

The Dow Jones is already down below the 22,000 mark — 1,800 points just today, with more than five hours still left to trade... And that's despite a trading halt early in the day.

N95 face masks, which are worn by house painters and dry-wall installers, are now selling for up to 10 times the normal price, if they're selling at all.

I just went on Amazon and wasn't able to find a single face mask vendor able to deliver before the end of the month.

Thirteen hundred cases in the U.S... as many as fifty-million left to go before this all starts to wind down.

Scared yet? I am. But I have to tell you, my analytical side is looking for the other side of the coin.

Don't Let The Panic Blind You

You see, for every crisis, there is a proportionate chance to benefit. I know it may sound morbid, even sociopathic to think in these terms at a time like this, but what else are we left to do? The opportunity is there. It's getting bigger by the day.

Are we just going to ignore it?

In the coming weeks, you're going to see some of the most remarkable bargains ever on the stock market — bargains that are completely driven by this panic and will evaporate the moment it passes.

As Baron Rothschild said more than 200 years ago, "The time to buy is when there's blood in the streets, even when that blood is your own."

He made his fortune investing in the chaotic moments following Napoleon's rout at the Battle of Waterloo.

Today, we are facing a battle of a different kind, but the chaos it's creating is rooted in the exact same emotion.

Next week, I'll be releasing a presentation on how to do exactly what Baron Rothschild described.

We had to rush this thing through production, and one week from now, our readers will be getting their first look.

The panic will not be over by then, so you won't be late to the game if you open it the moment you get it.

If you choose to wait, however, I can make no promises.

Be safe, stay well, and keep your mind focused until then.