The Cartel That Cried "Wolf!"

OPEC is at it again.

More correctly, the Saudis are at it again. They’ve been out throwing shade at their fellow OPEC member states for not keeping promises. And a few more states have signed on to implement more cuts in oil production.

Flash back to last year. Oil prices were dropping like Malaysia Airlines flights. And the cartel known as OPEC was seeing massive cuts to profits.

Let’s not forget that this was Saudi Arabia’s fault. It had been trying to flood the U.S. out of the market but forgot American companies don’t just give up when they face obstacles. American companies are stronger than ever, and OPEC is still hurting.

So, the Saudis started trying to convince all the other countries to join them in production cuts. They were hoping that would get the price of oil back up to less ludicrously low levels. And it worked... sort of.

You see, markets loved the sound of the first round of promises. But, other than the Saudis, most nations haven’t been so great about sticking to their word.

Iraq has made about 46% of its promised cuts. The United Arab Emirates (UAE) has hit about 54% of its target. Nigeria and Libya have both increased production.

Things just aren’t going as planned for the Saudis...

Now, before you feel bad for them, remember two things: First, the Saudis started this rout in prices. They were trying to get U.S. oil companies out of the market by flooding it with cheap oil and driving prices down.

Second, it’s not because the Saudis felt bad for their people or those other members. These proposed cuts are to directly benefit them.

The Biggest IPO in the History of Ever

They’re trying to make some big money by taking part of state-owned Saudi Aramco public. The intended IPO date is sometime next year. And it’s going to be the biggest (most valuable) IPO in the history of the world.

But it’ll be a whole lot more valuable if oil prices are a whole lot higher. The Saudis keep their revenues under tight wraps, but with a little digging and some creative math, you can get a picture of how they’re looking. And they’re not looking good... 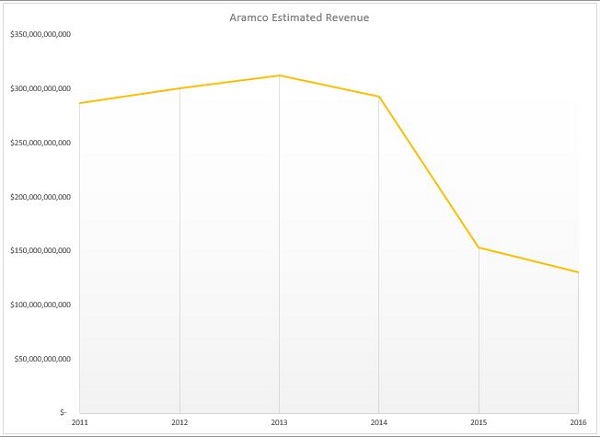 Who wants to pay top dollar for a company whose only product is falling in value? Not me. I’ll take those shares at a discount, please.

So, with the IPO fast approaching, the Saudis are trying to shame their fellow OPEC members into cutting production even more.

The Cartel That Cried "Wolf!"

The latest promises (that probably won’t be kept) came yesterday from Kuwait and the UAE. Kuwait Petroleum Corp. (KPC), the state-run oil company, agreed to cut sales volume for 2017. And the UAE tweeted that it’s “committed to its share in the OPEC production cut.”

Now, to be fair, Kuwait will likely make good on most of its promise. The country’s been hitting about 98% of its cuts so far. But the UAE, you’ll remember, has just barely cut half of what it’s already promised to cut.

Typically, if someone promises something multiple times and fails to deliver, you stop putting so much faith in those promises. How many times do you believe your partner when they promise to stop doing something and keep on doing it nonetheless? Fool me once, shame on you; fool me twice, shame on me.

And with oil futures falling shortly after the announcement, it looks like the markets are feeling like a scorned lover today.

Last year, when OPEC announced the first cuts, I was pretty excited. Oil prices were going to head up. They might even hit $70 a barrel by 2017. But with every announcement since, I’ve gotten a little less excited. Now I’m just jaded.

Promises are worthless unless you keep them. And OPEC countries have a sordid history of not living up to their words.

Needless to say, I’m not counting on these cuts to happen. Saudi Arabia has been hitting its target. Surpassing it, actually. But that’s because it benefits them the most. And the other OPEC members know it. Or at least they’re starting to realize it.

Judging by the group's flawless track record of keeping its promises (much sarcasm intended), I’d say it’s time we stop looking to OPEC to boost global oil prices and start looking harder for companies that can still make a profit with cheap oil...

My friend and colleague Christian DeHaemer has found just such a company. It’s got the rights to tap into an oil field worth over $400 billion — even with prices still low. And the best part is, nobody knows how profitable this company is about to become. That’s why it costs less than a dollar per share.

So, if you’re tired of hearing OPEC make promises it’s never going to keep and want a way to drum up big profits in the oil market, do yourself a favor and check out this presentation Christian has put together for you. Or, if you’d prefer, you can read the transcript here.

Either way, you won’t regret your decision to take a little time and see what he’s uncovered.

To investing with integrity (and a grain of salt),