Tesla Updates Everything but What Matters

The company is pushing out an update that will include in-car Disney+ streaming, a Car Wash Mode that makes sure the windows are rolled up before you wash it, the ability to disable the automatic dimming mirrors, improvements to the dashcam, and even a way to switch your "remaining range" display back and forth between miles left and battery percentage left.

Investors liked the presentation and sent the stock soaring nearly $40 the next day. But if they knew the ugly truth about Tesla (and every other EV in the world), they might have sold instead of bought.

You see, this was one of the biggest updates in the company’s history and came with just about everything…

Everything, that is, but the one thing Tesla (and every other EV-maker on the planet) needs to update in order to even survive what’s coming.

And that’s the batteries…

Because they’re just not good enough to power the world. And unless they change fundamentally, the EV revolution Elon Musk wants so badly will never get off the ground.

You see, the batteries that go into today’s Teslas (and every other EV, for that matter) are big, heavy, expensive, and inefficient.

They give you only a few hundred miles of range…

They take several hours (to several days) to charge…

They only last a few years…

And if all that weren’t enough to put the nail in their coffin, they have a bad habit of blowing up from time to time: 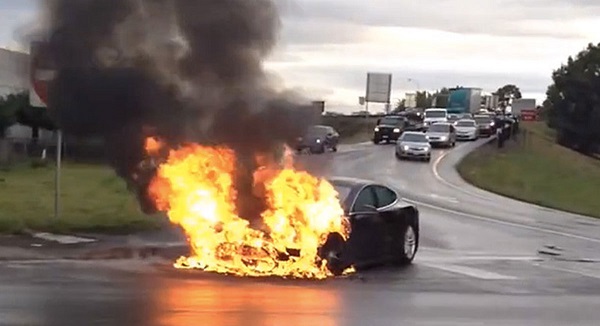 I wouldn’t wish the above situation on my worst enemy. It’s not something I want in the back of my mind every time I go for a spin to grab groceries.

And I’m willing to bet you don’t want to have to worry about it either.

But worry you shall if we have to go electric with the current generation of batteries.

Fortunately, we’ve got time to meet the outlandish deadlines set for us by our “esteemed” politicians…

A few years, at least.

And score early investors a monster profit while it takes the EV world by storm.

From the Lab to Your Garage

You see, there’s a completely new kind of battery in development out there.

It’s smaller, lighter, more powerful, longer lasting, and — maybe most important of all — not prone to explosions.

And one small company that very few investors have even heard of holds over 200 patents for the technology behind these incredible batteries of the future.

The company has been feverishly working to develop the new batteries behind closed doors for over a decade.

It’s even gotten the attention of the inventors of the lithium-ion batteries that power the EVs of today.

They were amazed upon seeing the company’s results and even went as far as to say this company may have attained what the world thought was impossible.

But the reason this company is still so small and so unknown is that its batteries are still in the lab. They’re not in an EV sitting on the showroom floor… yet.

The company has come further than anyone so far. It’s got proof that its designs work in smaller formats. Now it’s just got to expand that size.

And the management recently announced that it’s not only making major progress, but it’s surpassing even its own audacious goals.

The company has completed the next phase of development several months ahead of schedule. And it’s cashed itself up with enough dry powder to take the batteries from the lab to the factory.

But because it’s still pre-revenue (because it doesn’t have a final product to sell yet), most analysts and hedge funds are ignoring it.

And that means most Main Street investors still haven’t heard about it.

That’s the only reason this stock isn’t trading for hundreds or even thousands of dollars.

But once those batteries start rolling out of the factory, every EV manufacturer on the planet is going to be lining up to get them.

And every investor who wants to make a profit is going to start piling into this stock.

The only way to benefit when that happens is to get yourself invested now — BEFORE the rest of the world finds out.

So to help make sure you’re one of the early investors cashing out a monster profit and not one of the late investors making other people rich, I’ve put together a special presentation on the company:

I even tell you exactly how to invest and how high I think the shares will go before you should sell.

All you’ve got to do is click your mouse a few times and then sit back and think about how you’ll spend your newfound wealth.

Will you buy a vacation place in the mountains? Or maybe one at the beach? Or maybe you’ll just get one of each.

Or would you prefer to spend it on a new boat to cruise the tropics? Or maybe let someone else do the work and spend it on a cruise that takes you around the world?

How you spend it is up to you. How you’ll make it is detailed in my presentation.

So take a little time to learn more about this opportunity. And then send me a note to let me know how you’d spend your time if you become a multimillionaire.

All you’ve got to do is click here so I can help make them a reality.

P.S. Don’t forget to check out (and subscribe to) my YouTube Channel where I share some of my top stock picks. It’s completely free and packed with actionable analysis.