One week ago, I gave you a sample of an Options Trading Pit trade with a recommendation for Westport Innovations (NASDAQ: WPRT) calls.

Yesterday, I told my readers to sell. Here is what I wrote:

That said, trees don't grow to the skies. The stock has been up for five of the past six days, and there is some heavy resistance from back in October 2011. We are overdue for a sell-off.

We will look for opportunities to buy back on the next dip.

That's pretty darn good, no matter how you slice it.

When you have a run that good on the long side, you start to wonder when the other shoe will drop. I've been in this business for a long time, and with the exception of 1999, I've never seen stocks go up in a straight line.

Below we have the five-year chart of the S&P 500. It doesn't take a rocket surgeon to see a pattern here.

If you are a trader, this chart is telling you to lighten up on the long side. If you are a buy-and-holder, you should invest your tax returns in bonds and wait for the dip in equities. 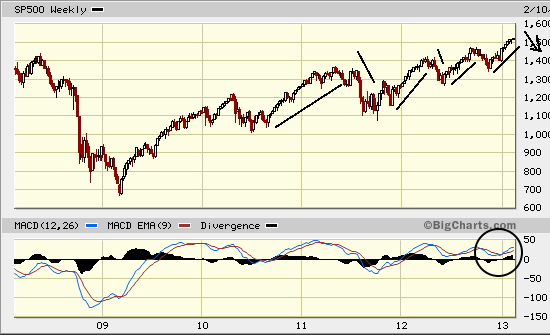 It never fails that the suckers buy at the top and sell at the bottom.

After ignoring the market for five years, the retail investor is back. CNBC reported a record $77.4 billion moved into equity mutual funds and ETFs in January. This compares to $23 billion for all of 2012.

This move has been branded as “The Great Rotation” — that is, money moving out of bonds and into equities.

When money moves out of bonds, interest rates move up, as you can see on this chart...

Higher interest rates are bad for the economy. Especially housing.

According to Vickers Weekly Insider Report, insiders are selling:

In almost perfect coordination with an equity market that was rushing toward new all-time highs, insider sentiment has weakened sharply — falling to its lowest level since late March 2012 insiders are waving the cautionary flag in an increasingly aggressive manner.

There have been more than nine insider sales for every one buy over the past week among NYSE stocks. The last time executives sold their company's stock this aggressively was in early 2012, just before the S&P 500 went on to correct by 10 percent to its low for the year.

If you extend it out, the eight-week sell-buy ratio is at 5-to-1, also the most bearish since early 2012.

What's more, the last time this ratio was at these levels was June 2011, just before a stock market sell-off.

Don't get me wrong; we are still riding a four-year bull market. I remain long and strong. There is little doubt the Fed wants a higher stock market and a higher housing market... and is willing to destroy the dollar to get them.

That said, the market has had a 10% correction in each of the last five years (and two last year). It won't be shocking if we get another one within the next two months.

The simple way to play a correction is to move your play money into bonds and/or money markets.