Well, from my earlier articles, you already know that robots are coming for your job.

Eventually, there’s going to be a robot that’s skilled enough to do what you do better, faster, and cheaper.

And if you’ve been watching the advances in robotics over the past decades, you probably aren’t surprised by that.

But would you believe it if I told you your dog’s job was at risk too?

If there’s one thing that drives me crazy, it’s seeing dogs in the airport with fake service vests on them.

Period. Hard stop. I don’t care how you feel about it.

They keep blind folks from walking out into traffic.

They help stop people from smuggling drugs and even trafficking other people.

They can find you in an avalanche and dig you out.

They literally save lives.

But putting a vest on them does not make them service animals.

And calling them service animals is an insult to all the animals out there that worked really hard to learn how to serve an ACTUAL purpose.

Move on Over, Rover

But, fortunately for emotional support dogs, robots aren’t eyeing that job just yet.

They just took one from the mine-sniffing pups in the U.S. military… 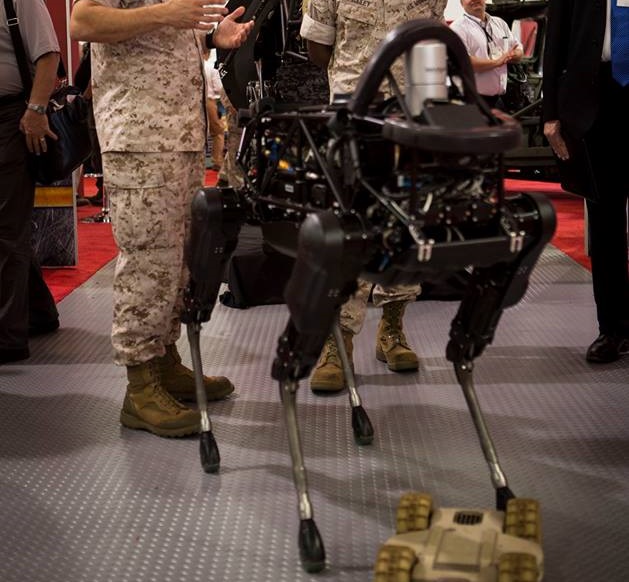 And they’re already heading to a war zone to help protect people and keep the real dogs safe from harm.

You see, the U.S. Army has agreed to provide one of its two robotic dogs to help clean up mines and other ordinance in Ukraine.

The dog, also known as “Spot,” will get started helping remove mortar shells and cluster munitions in formerly Russian-controlled areas near the capital of Kyiv.

First, it’ll use that robotic head of its to hunt down unexploded ordinance and land mines.

Then, after switching out its head for a robotic arm, Spot will drag the munitions to pits where they can safely be destroyed.

It’s going to make a huge difference, too, because while it only takes six weeks to train a human to detect and remove munitions, there’s a shortage of people to do the work.

Many Ukrainian employees have scattered since the invasion.

Some are stuck in Russian-occupied areas. Others enlisted in the military.

And that puts a premium on robotic work.

It also highlights why robots are making such a big surge into every aspect of our lives, from manufacturing the products we use to helping clean our houses before we get home.

There just aren’t enough skilled humans to do all the work we need done. It’s especially apparent in places like Russia and Ukraine where a lot of people have a lot of other things to do.

We’re in the midst of a labor crisis here in the States. And robots are going to help alleviate that.

And the companies and investors who help make that happen are going to be rewarded tenfold.

When shortages hit the dairy industry, Nestle stepped in with its condensed milk that didn’t spoil and won rich contracts all over the world…

Leading to its $95 BILLION empire today.

Or the investors who helped Unilever make margarine and get it shipped around the globe.

Butter shortages led to Unilever growing into a company that collects $55 BILLION each year in sales!

Those synthetic detergents led to P&G growing by 3,416%!

So maybe you can see why I’m a little more than excited about the potential profits coming for companies and investors addressing the labor shortage plaguing the planet.

The Time Is NOW

The thing is that those companies were developing those products for years before the need really surfaced.

They weren’t just pivoting to address a trending demand problem. They’d been preparing for it for years.

So when it happened, they were ready to explode with growth.

And that’s exactly where we are in the robotics industry, too. It’s been building for years to get ready for the time when it would be essential.

That time is now. Robots are urgently needed to help resolve the global labor crisis.

And the handful of companies that have been refining them and making better and better versions capable of more and more...

They’re poised to grow like Nestle, P&G, and Unilever did as they addressed the shortages of their eras.

They’re also set up to pay investors who help them get their robots out there helping around the world.

And I want you to get a piece of those payments that are sure to keep ballooning bigger and bigger.

So I’ve created a presentation detailing the opportunity this revolution has created.

But also pay you a steady and growing stream of income you can rely on if one of those robots ever comes for your job, too.

Just don’t wait too long to check out what I’ve uncovered for you.

We’re at a turning point where growth is going to accelerate exponentially.

And that means the big gains are going to come fast and frequent as we claw our way out of this bear market.

So the sooner you get a piece of the action, the better your chances at blockbuster profits become.

And while you’re waiting for that massive growth, you can sit back and collect payouts for helping launch the final industrial revolution.

Check it out today and get yourself set up for profits and payments right now.

I’ll be back soon with more ways for you to take advantage of the incredible discounts we’re seeing and the amazing growth that’s about to hit.