A container of greenish liquid gets dumped into a large metal bin containing mineralized rock and sediment.

Gradually, the temperature in the container rises as the liquid begins to react with the rock.

The liquid doesn't burn or erode the rocky matter...

It literally eats it.

When the process is finished, and the liquid has digested its way to the bottom of the batch, a group of workers processes the remains.

Perhaps even more amazing is that the liquid leaves almost no by-products.

No bio-hazardous materials or radioactive waste — or anything that would require a HazMat team dressed in spacesuits to safely transport and dispose.

When the workers are finished with one bin, the solution is simply collected and pumped into the next one, and the process starts all over again.

But here's where things turn for the surreal...

The green liquid added to the mineralized rock isn't a liquid at all, but a living, breathing, mass — with a very big appetite.

Utilizing bacteria which actually live off iron, sulfur, and a number of other less valuable elements, a highly-innovative resource company operating out of Northern Alberta is pioneering a process called bio-heap leaching to gain access to valuable metals that, just a few years ago, were hopelessly inaccessible.

Take a look at this diagram to better see this process: 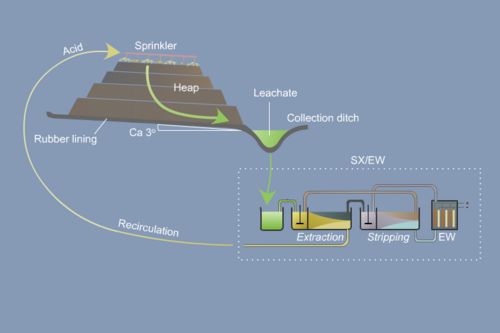 But in the last three decades, advancements in the development of a far more versatile, biological solution to replace the acid has put the process on the forefront of modern science.

Today, dozens of bacterial cocktails have been synthesized and optimized to extract everything from uranium to lithium to the old favorites, gold and silver, from some of the most expensive-to-mine mineral formations known.

It's cheap, it's clean — and it's as close to self-sustaining as any other recovery method used in the mineral resources industry.

The biggest advantage, however, is the degree to which bio-heap leaching can transform topography unfit for traditional mining... into highly lucrative industrial and precious metal production sites.

Of course, an outfit working on something this revolutionary isn't going to waste the opportunity on just any random chunk of available real estate...

They currently hold the mineral rights to a 2,500-square-kilometer property (that's 900 square miles, or half the size of Delaware) in Northern Alberta, which in recent years has gotten a great deal of attention for its mushrooming shale oil industry.

Taking the most modest estimates available, drill tests indicate this property contains $1.71 billion just in copper, silver, and zinc, which it will be able to tap over the course of the next several years with a series specially-optimized bio-heap leaching solutions.

From the very start of production, the cost of recovery will be a small fraction of that of a traditional mining operation...

Not bad for a company currently trading at 60 cents — with a total market cap of less than $40 million...

As always, find out where our editors are looking to secure their wealth in articles from this past week, below.

California Has 4x the Oil that's in the Bakken: Another Bakken Found!
California could have more than four times the recoverable shale oil than the Bakken in North Dakota. It has more than 4.5 times the reserves of the Eagle Ford Formation in Texas.

China Buys Record Amounts of Oil: Buy Low, Sell High
The easiest way to make money is to buy stocks low and sell them high. Here's how it works and here is what is low.

Peak Oil Debate Continues: Has Become Political Issue
Peak Oil is about the maximum rate of production of crude oil. It isn't about politics, reserve numbers, tar sands, or anything else. Investors should know this and not be fooled.

Collecting on this Chinese Energy Debt: Let the Energy Footrace Begin
As tension grows between the United States and Canada over supplying Asia with its future energy needs, what lengths will we go to in order to sell LNG to China?

Massive Mine in Canada
Next Tuesday I will be visiting Fort McMurray in Alberta, Canada, and I'm taking two of our editors along for the ride. Each has his own interests in this trip... and promises to bring his readers a blockbuster opportunity.
Buffett's Envy: 50% Annual Returns, Guaranteed
Warren Buffett once told investors at an annual shareholder meeting, "...it's a huge structural advantage not to have a lot of money. I think I could make you 50% a year on $1 million. No, I know I could. I guarantee that."