There's nothing more entertaining than watching a mega-corporation get riled up.

And Monsanto Company (NYSE: MON) is one you can always count on to put on a good show.

The agriculture giant has been stirring up trouble in the United States since 1907, going to bat over even the smallest threats to its sprawling agricultural empire.

But now the company may be up against an opponent it can't beat: the State of California.

The Lawsuit Everyone is Talking About

In November 2017, Monsanto launched a lawsuit against California, combating the state's demand that Monsanto label its famous Roundup weed killer as carcinogenic.

Now, to be truthful, this legal skirmish feels overdue.

California is a massive state littered with farms. It is also well known for being health-crazed.

Whether you are in San Francisco or San Diego, you're going to see individuals toting farmers market bags packed with organic produce.

Knowing that, it was almost expected that California would run amok of Monsanto and its genetically modified seeds.

But California's clampdown on the company came from a direction no one expected. Instead of attacking Monsanto's seeds, California is attacking its pesticide.

The reason California is requiring Monsanto to slap the carcinogenic sticker on Roundup is because of research from the International Agency on Research on Cancer. Recently the agency ruled that glyphosate, the active ingredient in Roundup, could be carcinogenic.

California is one of the only states to enforce laws requiring companies to disclose potentially carcinogenic chemicals in their products.

The law is called Proposition 65, and it isn't just for food companies. It applies to any company that makes a product containing specific chemicals.

It doesn't matter if the chemicals are in a coffee mug or the paint on an amusement ride.

Not even Disneyland can escape Proposition 65. 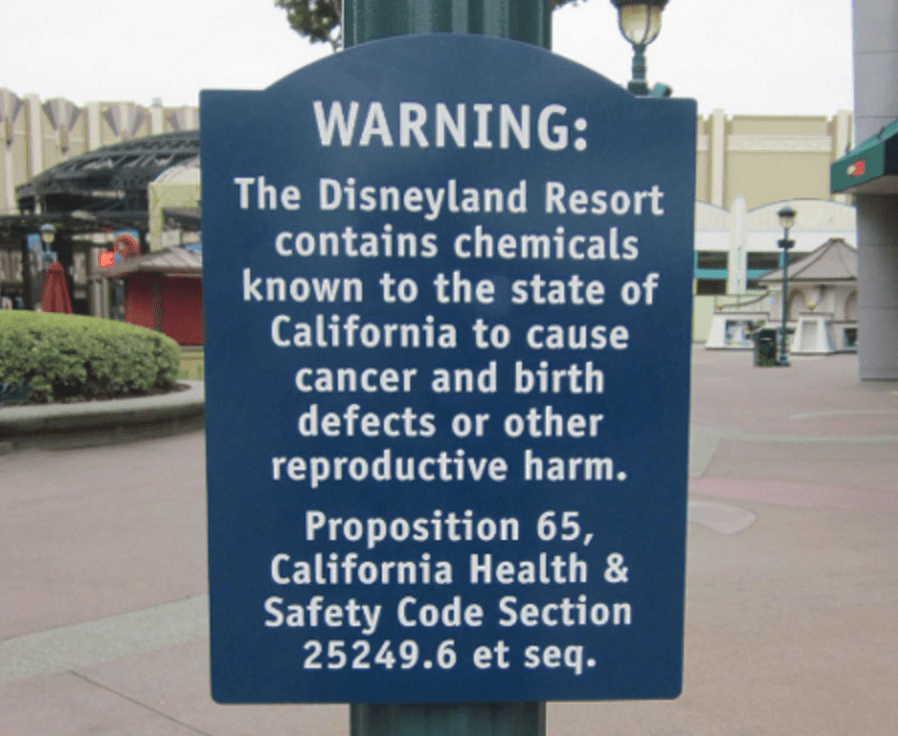 But Monsanto isn't going to submit to Proposition 65 without a fight.

The company dragged the State of California into court, stating that the label would be both "false" and "misleading."

Now, to an outside viewer, this may seem like a simple dispute over labeling. But for Monsanto, it is so much more.

You see, Roundup has been raking in revenue for Monsanto for over 50 years.

That is why Monsanto is willing to go to bat against one of the most powerful states in America.

Roundup is essential to its business model, and labeling it as carcinogenic could dissuade farmers from using it on their crops.

A Giant on Sticks

You don't have to look very far to see the truth behind Monsanto: The company is a giant teetering on two sticks.

The sticks I am talking about are Monsanto's two main products — products that currently dominate the global agricultural market.

The first of those products is genetically modified seeds. The second is glyphosate.

If those products are threatened, then Monsanto's hold on the whole market is weakened.

But before we can go into exactly how disastrous this glyphosate situation is for Monsanto, you need to understand a bit about the company and how it became the giant it is today.

Growing rapidly, Monsanto added caffeine as one of its chemical offerings in 1915, acquiring Coca-Cola as a client. In 1917, the company went along to develop aspirin. In 1964, Monsanto manufactured a chemical known as Agent Orange, a highly toxic herbicide used to clear jungles during the Vietnam War.

Then Monsanto hit its stride in the 1970s, making moves that allowed it to grow into the company we know today.

In 1974, Monsanto introduced its glyphosate-based weed killer Roundup to the market. It wasn't long before this weed killer was being used all over the world.

Yet despite Roundup's success, Monsanto found further ways to profit from glyphosate.

In the 1990s, it introduced a wave of genetically modified seeds to the market. These seeds had been modified to make them resistant to glyphosate, making them the perfect compliment to Roundup.

This means if glyphosate it outed as carcinogenic, Monsanto has to worry about not one but two sources of revenue: glyphosate-resistant seeds and glyphosate-based weed killer.

California Isn't the Only Threat...

After looking at Monsanto's history and key products, it's easy to see why the company is willing to fight California over Proposition 65.

Monsanto leans heavily on the combined revenue of its glyphosate-based weed killer and genetically modified seeds.

That said, if glyphosate comes to be considered carcinogenic, then Monsanto faces losing not one but both of its major products.

And the news doesn't get any better for the agriculture giant.

While Monsanto is busy fighting labeling wars with California, it also has to consider another enemy: rapidly developing technologies.

While it's true that Monsanto was one of the first companies to pioneer plant gene editing, its methods are now considered antiquated.

One of these companies even has access to the CRISPR-Cas9 patent, which will allow it to use one of the most cutting-edge gene-editing methods known to man.

Through this gene-editing method, foods could potentially last longer, survive harsher environments, and even be more nutritionally beneficial.

Best yet, this kind of gene editing could abolish the need for pesticides, destroying demand for both Monsanto's seeds and its Roundup weed killer.

This month, Wealth Daily's senior technology analyst Jason Stutman will be releasing a FREE presentation with details about this small biotech company.

Like Monsanto once did, this company has the power to change the way we approach agriculture, and it can help you profit in the process.

So stay tuned. We are going to be looking into a lot of emerging industries this year at Wealth Daily, from biotech to digital currencies.

You won't want to miss this.

The Tiny Startup That's Going to Take Down Monsanto
Monsanto is going down, as one little-known agriculture company positions itself to render Monsanto’s entire business model obsolete.
What Sounds Like a GMO, Grows Like a GMO, But Isn't a GMO?
Monsanto is the "Sultan of Seeds." Nearly 90% of all the crops grown in the U.S. contain some genetic trait patented by this giant conglomerate. But a tiny company is about to unseat this Goliath from its throne...
A Technology That Could End Food Shortages
There are 815 million people worldwide who don't have enough to eat. One biotech company is working towards solving this crisis with its breakthrough gene-editing technology.
Buffett's Envy: 50% Annual Returns, Guaranteed
Warren Buffett once told investors at an annual shareholder meeting, "...it's a huge structural advantage not to have a lot of money. I think I could make you 50% a year on $1 million. No, I know I could. I guarantee that."