Put These Stocks on the DO NOT BUY List

Shake your chains to earth like dew
Which in sleep had fallen on you —
Ye are many — they are few.

Big Sis has a big problem. Her version of a boot stamping on a human face forever is causing a something of a revolt at the nation’s airports.

The sheeple, it seems, are refusing to be shorn...

Given a choice between a virtual strip search and an unbridled grope session, airline employees and passengers alike have decided that they won’t sacrifice their dignity on the altar of “security” for much longer.

Like Rosa Parks before them, they are “tired of giving in” to some goon squad working their way down a cold, bureaucratic checklist. Instead of submitting, they are resisting.

That leaves Janet Napolitano a bureaucratic mess on her hands as she continues to bleat, "It's all about security. It's all about everybody recognizing their role.”

According to Janet, you are to do as you are told — even as Big Brother strips away your last shred of humanity.

I don't think so

But not everybody has been so willing to have the hands of the government so close to their nether regions. Californian John Tyner’s TSA experience during a trip to South Dakota earlier this week has suddenly gone viral.

“You touch my junk,” Tyner told the TSA Agent, “and I’m going to have you arrested.” For his trouble, Tyner missed his flight, was escorted from the airport, and has since been threatened with an $11,000 fine.

Tyner’s story, however, is just one of the many. From nuns to children to senior citizens and even pilots, Napolitano’s “security” inspired theater is an equal opportunity offender.

What it doesn’t do is make air travel any safer, according to Rafi Sela, a thirty-year veteran of the Israeli Airport Authority.

"I don't know why everybody is running to buy these expensive and useless machines. I can overcome the body scanners with enough explosives to bring down a Boeing 747. That’s why we haven’t put them in our airport,” Sela said, referring to Ben Gurion International Airport, which has some of the toughest security in the world.

Instead, Sela recommends behavioral profiling rather than random checks along with a “trusted traveler” program so that pre-approved, low-risk passengers can be quickly moved through the process.

"You have to actually look for the things that are dangerous, and not just scan everybody," he advises. "My point is that if you know who is flying, you don’t really need to check for water bottles and nail files, but can direct more resources to looking for explosives and drugs.”

But that might take actual expertise, which the TSA clearly doesn’t have.

In reality, its ham-handed approach is as amateurish and rude as it gets.

Even still, more of the nude-scanners are arriving at airports everyday, with 1,000 expected to be in place by the end of 2011.

Seems this is just the beginning with these folks. And the residual effect is that marginal travelers will opt out of flying altogether, rather than be worked over by the equivalent of souped-up mall cops.

For the airline industry — which lost $11 billion in the global recession — this is the last storm they can weather. Any dip in passengers will weaken their already struggling bottom lines...

It's a trend that will only grow with every grope, says Geoff Freeman, executive vice president of the U.S. Travel Association. He recently told Reuters, "We have received hundreds of e-mails and phone calls from travelers vowing to stop flying.”

It's a bad situation made worse.

In fact according to a 2008 survey by the U.S. Travel Association, air travelers already "avoided" 41 million trips because they believed the system was either "broken" or in need of "moderate correction." The survey estimated those missing flights cost the airlines $9.4 billion in losses.

As for some real junk not to touch, I would put all of the domestic airlines on the Do Not Buy List. That includes US Airways Group (NYSE: LCC), Southwest Airlines ( NYSE: LUV), and JetBlue Airways (NASDAQ: JBLU).

Along with future higher fuel costs, the margins of these companies and others will surely be affected by weaker demand, driving their share prices lower in the short term.

Besides, as you can see, these are stocks that are already primed for a pullback... 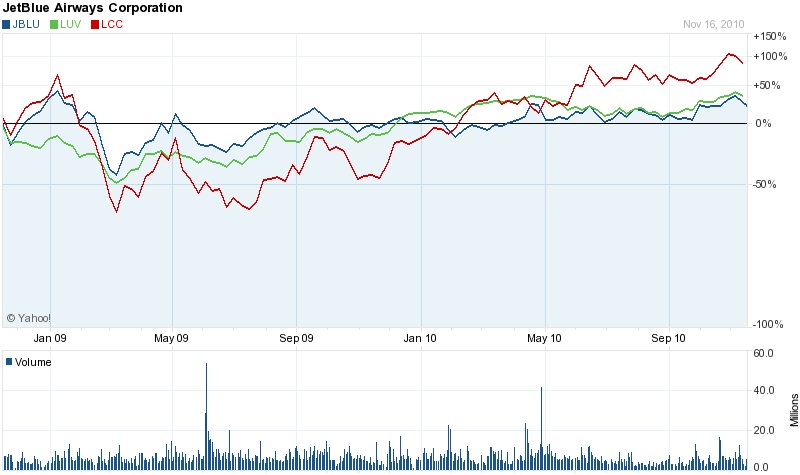 As for the sector itself, this is one in which profitably just doesn't exist on a historic scale.

In that regard, I couldn't agree with Warren Buffett more than when he said, “How do you become a millionaire? Start out with a billion, then buy an airline.”

That about sums it up for me.

By the way, a grassroots group called We Won’t Fly is calling for a “National Opt Out Day" on Wednesday, November 24th — the busiest travel day of the year...

We are opposed to the full-body backscatter X-ray airport scanners on grounds of health and privacy. We do not consent to strip searches, virtual or otherwise. We do not wish to be guinea pigs for new, and possibly dangerous, technology. We are not criminals. We are your customers. We will not beg the government anymore. We will simply stop flying until the porno-scanners are history.

Ye are many — they are few.