Closer to Peak Oil than Officials Have Admitted

Yesterday I stocked up on ammo.

At first, I wanted 1,000 rounds of hollow points for my Sig 250. But after searching every site I could think of, I couldn't find anything! They were cleaned out like the bakery before a blizzard.

All the major vendors were out of stock. Some weren't even accepting backorders!

If I wanted ammo, I would have to load it — shot by shot — myself.

Luckily, after searching for about an hour, I found all the components I needed.

I picked up casings of Winchester brass, .40 S&W bullets, a brick of CCI primers, and a pound of Hodgdon powder.

The run on guns and ammo has been well-reported since Obama's election. Many believe the run has to do with fear that the Democrats will further regulate guns. And that's part of it, for sure.

But I can you tell you that the run started well before Obama started running for president. . .

As I wrote to you on November 1, there's a growing sense among the populace that they've been had — by both parties. . . that something dramatic and bad is on the horizon. . . and that the government is behind it.

Here's what I wrote:

In the 16 years I've been in this business, I can't think of a time when there's been more distrust, more graft, and more uncertainty surrounding the world of finance and politics.

The reality is that those two worlds — finance and politics — have essentially merged. And it's no secret there's a revolving door between DC and New York.

Worse still, the media has been actively collaborating, perpetuating the myth that we can spend our way to prosperity, that if we just buy and hold we'll get wealthy some day, and a thousand other idiotic ideas that now rival the hollowness of the phrase "Change we can believe in."

It's incredible to me how many of these talking heads remained on air, despite the fact that they couldn't have been more consistently wrong if they'd known in advance how things were going to turn out.

No matter which way you look, you get the sense that you're being gamed. And you're right.

The plain fact is no one in politics, in the media, or in mainstream finance cares about you, aside from your value as a "useful idiot." — Wealth Daily, November 11, 2009

I practically built Angel Publishing (which has over half a million readers to date), on the back of a single idea: an investment trend that I knew — if it turned out to be correct — would create a fortune for myself and my readers.

I also knew that it would take guts to put forth this investment thesis because I would be going against the establishment.

That idea was Peak Oil. Or more simply, the idea that the world was running out of cheap oil.

For years I was called a quack. . .  a conspiracy theorist. . .  and a bonehead.  Fox Business News brought in my colleague, Chris Nelder. . . and promptly called him a "Peak Freak" on-air.

Wait a minute. The world was awash in oil, right? After all, the government and Exxon told us so. And these guys are smart and well-intentioned, right?

Well, two days ago, a news report from the UK sent shock waves throughout the energy sector.

According to an article by The Guardian entitled "Key Oil Figures were Distorted by US Pressure, says Whistleblower":

The world is much closer to running out of oil than official estimates admit, according to a whistleblower at the International Energy Agency who claims it has been deliberately underplaying a looming shortage for fear of triggering panic buying.

The senior official claims the US has played an influential role in encouraging the watchdog to underplay the rate of decline from existing oil fields while overplaying the chances of finding new reserves.

Now the "peak oil" theory is gaining support at the heart of the global energy establishment. "The IEA in 2005 was predicting oil supplies could rise as high as 120m barrels a day by 2030 although it was forced to reduce this gradually to 116m and then 105m last year," said the IEA source, who was unwilling to be identified for fear of reprisals inside the industry. "The 120m figure always was nonsense but even today's number is much higher than can be justified and the IEA knows this.

"Many inside the organisation believe that maintaining oil supplies at even 90m to 95m barrels a day would be impossible but there are fears that panic could spread on the financial markets if the figures were brought down further. And the Americans fear the end of oil supremacy because it would threaten their power over access to oil resources," he added.

A second senior IEA source, who has now left but was also unwilling to give his name, said a key rule at the organization was that it was "imperative not to anger the Americans" but the fact was that there was not as much oil in the world as had been admitted. "We have [already] entered the 'peak oil' zone. I think th 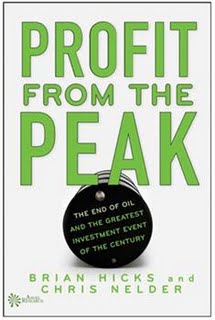 at the situation is really bad," he added.

But as far back as 2004 there have been people making similar warnings. Colin Campbell, a former executive with Total of France told a conference: "If the real [oil reserve] figures were to come out there would be panic on the stock markets . . . in the end that would suit no one."

You're being gamed. Period.

The government thinks you're too stupid to handle the truth.

They can go sell crazy somewhere else. I'm not buying it. I never did.

If you read Wealth Daily, you at least give yourself a fighting chance.

It's time to revisit the "Trade of the Century."

I've contracted the best futures traders in the market today. Their job? Put together a trade on Peak Oil.

I expect by January 2010 to give you this trade.

And while the peak oil clock is ticking, there remains an opportunity for my readers to get in on what may be the last great oil run on U.S. soil. Fact is, oil and gas companies are chomping at the bit to set up drill operations in this region. This report details three opportunities for you to profit during oil's homestretch.