All bets are now off on just how high oil will run. $200 a barrel may be the least of our worries come this November 2008.

And it's all thanks to a continued failure to account for peak oil, rising demand, supply erosion, and the continued death of the dollar, which will spawn super spikes feeding on supply disruption, geopolitical tension, demand and weather.

Just be prepared for the super oil price spike that sends tank prices well above $5 a gallon... maybe even $12 by 2012. 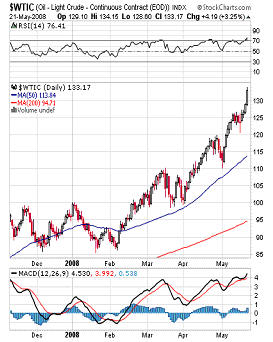 Sure, price differences between near-term and long-term oil futures contracts point to a near-term fall on technicals, but as long as demand continues to grow with little supply, we're not willing to call the end of the oil rally.

The only time we can call the oil top is when supply finally eclipses demand, which will happen when ordinary consumers can no longer afford energy costs. When that happens, we'll talk of an oil rally top.

But now comes the forecast for $12 for a gallon of gas, says Robert Hirsch, Management Information Services Senior Energy Advisor.

"[T]he prices that we're paying at the pump today are, I think, going to be ‘the good old days,' because others who watch this very closely forecast that we're going to be hitting $12 and $15 per gallon," Hirsch said.

"And then, after that, when oil - world oil production goes into decline, we're going to talk about rationing. In other words, not only are we going to be paying high prices and have considerable economic problems, but in addition to that, we're not going to be able to get the fuel when we want it."

While Hirsch has later said $12 to $15 wasn't his prediction, instead citing Charles T. Maxwell, he did admit that the high prices were inevitable.

Maxwell, on the other hand, an energy analyst, expects the oil-induced financial malaise to run from 2010 to 2015. Unlike the recession the U.S. appears to be in today, "This will not be six months of hell and then we come out of it."

Instead, he expects the crisis to last upwards of 12 years, "as the world goes through a prolonged period of price-induced rationing (e.g. oil up to $300 a barrel and U.S. pump prices up to $15 a gallon)..."

Says The $20 Trillion Report's Brian Hicks, "The investment that needs to be made into the energy complex to meet surging energy demand is mind-boggling..."

The Super Spike of November 2008

While the International Energy Agency's oil supply forecast won't be released until November 2008, there's growing fear of a sharp downward revision in supplies. That means supply could be much tighter than previously thought, a nightmare scenario if proven true.

Any pessimistic IEA view will shock the market, spawning oil super spikes. We've already seen prices rocket to $130, doubling year over year. And it'll only get worse on a dismal IEA forecast.

For years, the IEA has said that crude supplies and other liquid fuels would keep up with rising demand, topping 116 million barrels a day by 2030. But now there's fear that the IEA, basing findings on aging oil fields, could revise sharply lower and warn of a struggle to keep up with 100 million barrel a day demand over the next 20 years.

That's called Peak Oil. And it's a dangerous situation.

But IEA pessimism is nothing new. Just last summer, the IEA warned that spare OPEC capacity could fall to "minimal levels by 2012."

Even the U.S. Energy Department is embarking on its own supply studies, which could be finished by summer. But they, too, may have nothing positive to say. They already suggest that daily 73 million barrel daily output will level off at 84 million barrels. To then reach 100 million barrels a day by 2030, we'll need a sizeable boost from other fuel sources.

Your best bet in this market. Buy and hold energy stocks. They're going much higher. Better still, you can always buy oil at $73... sorry, $78 days after the initial Pure Energy Trader recommendation.

Listen, I've said this before. I'll say it again. We're not economically pessimistic at Wealth Daily. But we won't put on the rose-colored glasses, and tell you everything's okay. We're simply trying to profit from an eventual "blood in the streets" investing scenario.

As I said in my The Trader's Pit blog, in case you missed it:

It's okay to believe in aliens.

Scientists got the okay to mix animal and human embryos.

Yep, the House wants to sue OPEC for "limiting oil supplies and working together to set crude prices."

The bill, if passed, would subject OPEC oil producers, including Saudi Arabia and Venezuela to the same antitrust laws that U.S. companies follow. Can you imagine the Chavez reaction?

The idea passed 324-84, which means a presidential veto is overridden. "This bill guarantees that oil prices will reflect supply and demand economic rules, instead of wildly speculative and perhaps illegal activities," said Democratic Rep. Steve Kagen of Wisconsin, who sponsored the legislation.

Fortunately, the White House opposes it, saying that "targeting OPEC investment in the United States as a source for damage awards "would likely spur retaliatory action against American interests in those countries and lead to a reduction in oil available to U.S. refiners."

The bill would still be subject to Senate approval.

Here's an idea. If you want to reduce dependence on OPEC, hire engineers and companies that can find domestic oil. Instead, Congress wants to attack OPEC, which can reduce supply and drive prices higher, with an army of attorneys.

I'd love to hear what you think, too. Please leave comments below.

Now if you'll excuse me, running with my scissors just became a good idea, too.