I remember a time when it was still socially acceptable to question an adult male's masculinity if his vehicle of choice was anything but fossil fuel driven.

Tesla's hyper-performing family car, the Model S, which is tied for second place as the quickest accelerating car on the market right now, and the Model X SUV, which can now match a Lamborghini Aventador's 0–60 mph, largely put an end to that myth.

Later this year, when Tesla's much-anticipated Roadster is slated hit the market, whatever is left of that myth will be forever scattered to the wind as the two-door coupe will be the first production street car ever to to hit 60 in less than two seconds.

For all the petrolheads out there, I know this hurts. Unfortunately, it gets worse.

What few people on either side of the conversation are aware of is that electric vehicles showed strong signs of superiority from the very dawn of automotive history.

Zero to 60 is a contemporary standard by which to judge cars, but what about just reaching 60 miles per hour in the first place?

The first car ever to break the 100-kph (62-mph) barrier was a Belgian EV called La Jamais Contente, "The Never Satisfied."

Driven by Camille Jenatzy, this rocket-shaped, windshieldless monstrosity hit 65 miles per hour on May 1, 1899, setting a world land speed record — the sixth consecutive such milestone for electric vehicles since official documentation began the previous year. 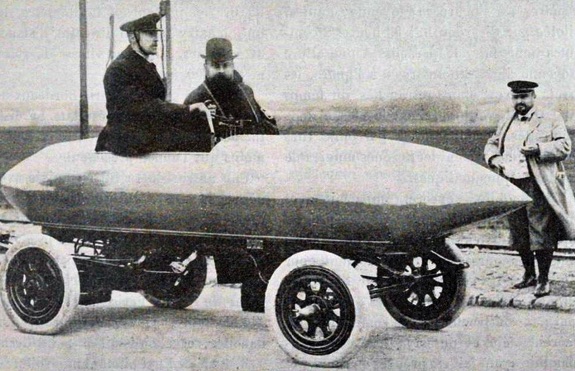 That moment was the high-water mark for electric vehicles in terms of lead-edge performance.

No electric car has won the trophy since.

The reason, as consumers would learn more than a century later, was clearly not technical.

Electric motors will run at far higher speeds than internal combustion engines and produce more torque along a much broader torque curve.

This is why electric vehicles don't have gearboxes; they don't need them. Maximum torque is available close to 100% of the time.

So again, I know this is painful for some people to hear.

It's painful for me to say, and I've tried to deny it. But now, with great lament, I must accept the fact that any ICE-driven vehicle I buy in the future, no matter how high tech, efficient, quiet, or refined, will be a relic from day one.

For anyone left unconvinced that electric motors are inherently superior to the ICE, at least in the passenger car application, here's one last fact that you might want to consider.

The End of the Road

Back in 1905, the first gas-driven car to capture the land speed record boasted a 52-horsepower, eight-liter engine.

Eight-liter engines today are unusual because you can easily squeeze enough power to go 200 mph out of a motor with half the displacement, but the one that does come to mind is the 1,200 horsepower beast powering the Bugatti Veyron.

That's a power increase of 2,300% per cubic centimeter.

The result is inevitable.

After a century of cutthroat competition between the car and truck producers of the world, internal combustion engines have evolved close to the point of perfection.

The electric motor, has, let's just say, been somewhat starved for this kind of industry attention.

In fact, today's electric motors are still configured largely like the very first ones ever built back in the first half of the 19th century.

You have a spool, a copper coil, and a magnetic field.

Electrify the coil and the spool turns.

It's the same basic idea and layout that Michael Faraday first experimented with back in the 1820s.

What Does Tesla Have in Common with the Telegraph?

What do you think the automotive market is going to do when the innovations start appearing?

Well, we're not going to have long to wait because the first one is already on the market.

The first true evolution of the electric motor in nearly 200 years hit the commercial market just last year. In the next few years, it could change everything.

This technology uses artificial intelligence to moderate the flow of charge through the copper coil.

Called Dynamic Power Management, it optimizes the amount of torque the motor can produce no matter how fast it's turning.

The result: more efficiency, longer engine-life, and yes, something that every petrolhead holds close to his heart... more power.

This patent can be applied to almost any electric motor in existence, from the tiniest all the way to the house-sized power plants driving the propeller shafts of today's biggest tanker ships.

The patent holder isn't some automotive giant. In fact, few people have ever heard of the company.

Considering the implications, however, news of its achievement is spreading fast.